Theme: Pronoun puns. Words that are homonyms of phrases that include a pronoun replace those phrases in well-known sayings. 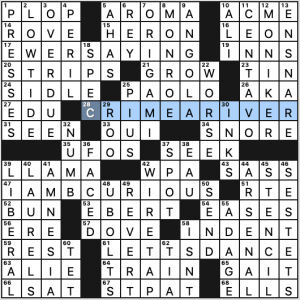 This one took some thinking to nail down, but on the whole, it works. Maybe some of the entries could be tightened up, but CRIMEA RIVER is worth the price of admission.

Tons of long Down fill to inspect. How does the puzzle fare? Pretty good with LOW TIDE, OVERDUE, ORIGAMI, MONROE, ANGOLA, CENTAVO, MONIKER, LIBERAL, AMNESIA, WIRETAP, and ARSENAL all in the strong plus column. Those NW and SE corners are quite large with little to complain about. Plus, there are no other pronoun-type phrases (like “I WIN” or “I RULE”) in the fill, which there often is. Good attention to detail there. 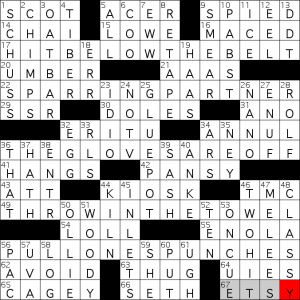 this is a pretty good theme. boxing has certainly receded in prominence in american culture over the past half-century, but it’s interesting that there are still so many common expressions with their origins in boxing. the awkward ONE’S in the last theme answer is about the only thing i didn’t like about the theme, and that’s pretty minor.

5×15 is quite a lot of theme, so there isn’t a great deal of breathing room left in the grid for sparkly fill. there’s only one seven-letter fill answer, and it was totally unfamiliar to me: {Receptacle for one doing decoupage} GLUEPOT. of course, it’s inferable, and it’s certainly a word (well, merriam-webster lists it as a two-word phrase, but the new oxford american has it as a single compound word), and i’ve never done decoupage, so i can hardly be considered an expert or how legit this term is. i could imagine that somebody who’s into decoupage would enjoy seeing this entry, but for me it wasn’t an asset.

THEME: Word beginning with PRO redefined in terms of what they are for 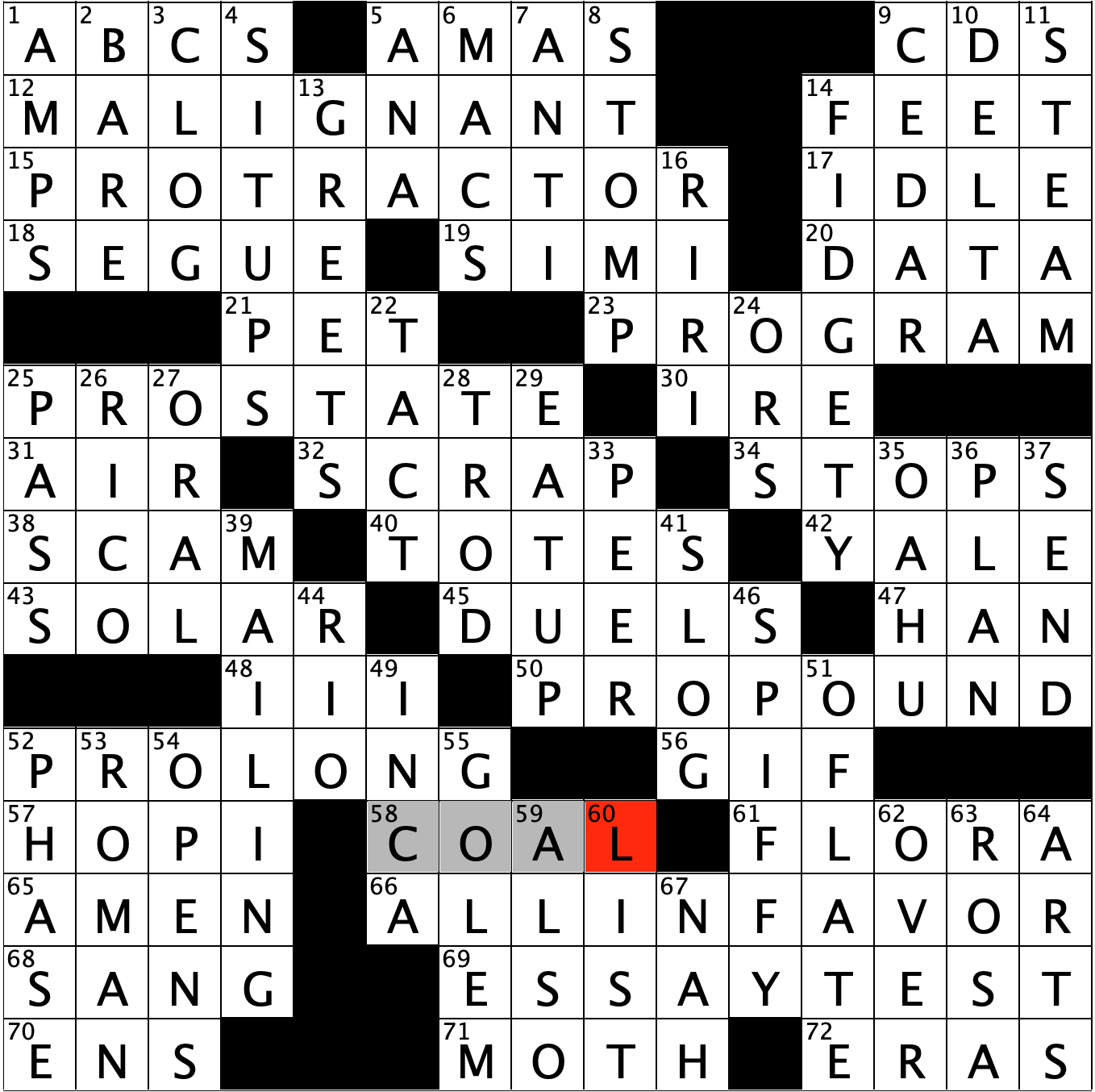 Easy and very well-executed puzzle today that was fun to solve from start to finish – with an apt and fun revealer. There were a lot of theme answers and they all work very well within the context of the puzzle, and their placement worked nicely to allow longer non-theme answers not get in the way or confuse the theme at all. PROPOUND felt less common than the other long words, but clued very fairly – so even if it isn’t something I would come across in daily language, it worked for the puzzle. My favorite clue was for PROLONG [For actress Shelley or Nia?].

MALIGNANT, ESSAY TEST, and FIDGETY were all fun long answers to come across while solving -and I particularly enjoyed the clue for ERA [Some are named for queens]. 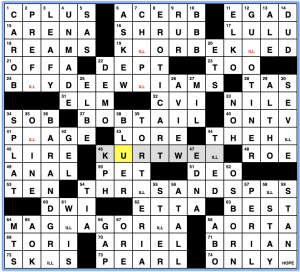 I think this is the most I’ve ever been on Byron Walden’s wavelength for an AVCX – this fell for me almost instantly once I realized what was going on with the grid.

The title “Pandora’s Boxes” tells you everything you need to know about what the rebus squares in the puzzle contain:

The grid is full of ILL, with HOPE emerging right at the end.  I liked the construction on this one! I’m not a fan of Roman Numerals in puzzles, though the Super Bowl-themed cluing of CVI was much appreciated over any sort of math problem.

In addition to the theme from”To Sir With Love” and the theme for “The Man with the Golden Gun”, LULU also was involved in a 4-way tie for Eurovision in 1969! They…didn’t have a plan for what to do if that happened, so all four songs won.