I didn’t fully grok the theme until after the solve. I could see that the main theme entries were all bent upwards at the beginning, but I couldn’t understand why. Then I realized those Down entries are palindromes, and looking at it from the perspective of the main theme answer, the beginning is split in both the Up and Down directions. Pretty cool. 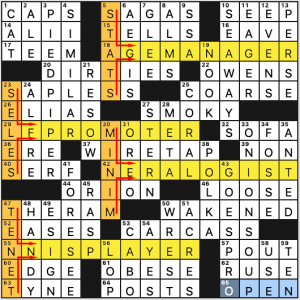 Like I said, this was pretty cool, but given the title, it seems like it would make more sense if the split came at the end of the theme entries. Here we start at the split and come together to form the rest of the themer. I guess it’s just a matter of perspective.

And I can’t find any significance of the word “personalities” in the title. The words STAGE, SELF, MINERAL, and TENNIS are split but there doesn’t seem to be any connection. I think it’s just because the term is idiomatic. “Split Decisions” might work better since the reader can decide whether to read upward or downward.

Anyway, on to the fill. I felt like I was not on the right wavelength for most of the solve, but maybe that was because I was still trying to sort out the theme. I’m not keen on SAPLESS [Lacking vitality] which I tried to make HAPLESS for a while, but that’s about the iffiest entry in the grid. Much better are PIED PIPER with a great clue [Leading figure in folklore] and ONION SOUP as well as WIRETAP, GOES PRO, FORESEE, and CARCASS.

Fun theme which I enjoyed unpacking, and plenty to like in the fill. Clues got thorny at times, but it is Thursday after all. 3.9 stars.

Jim P here sitting in for the vacationing Jenni.

Paul Coulter brings us today’s clever puzzle which has sort of a Shrödinger theme. In a Shrödinger puzzle, a clue can have more than one answer, and the crossing entries are crafted in such a way that the letter changes still work with their carefully-worded clues. Here though, each theme clue still has two answers, but the letters put into the grid are exactly the same for both answers. The only question is where do you place the word break. Thankfully, the clues give us that information parenthetically. Supply your own punctuation where needed. 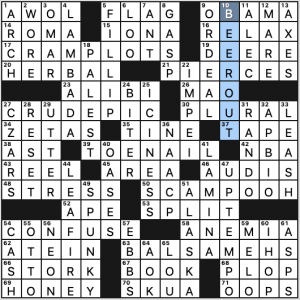 I love this idea. If you’re one who loves playing with words, then I can’t think of anything more word-playful than this! My favorite is the first one I uncovered (the BEE/BEER one), but the CRUD/CRUDE one is smooth as well. The CRAM/CRAMP one is fine, too.

But unfortunately the rest felt really forced, especially the BALSA/BALSAM one. I didn’t even know there was such a thing as a balsam tree. And MEHS/EHS as nouns is just bleh.

I wonder if the clues would have worked without the parenthetical information. As it is, as soon as I saw it, I knew what was going to happen. Would I have been able to figure out without that? I have no idea, but I guess a certain percentage of solvers might not have, and Peter and Paul probably didn’t want to leave too many solvers disgruntled.

I nearly got stuck in that central upper-left area because I’ve never ever heard of the word FILLIP [Incentive] and I had I_INESS for [Reserve] and could not see that a C would go in there. LAMINA [Thin layer] was another tough one for me since PATINA fit so well. Oh, and I actually did finish with an error at 27d CZARS [Drug kingpins?], which, for some reason, I wanted to be CBERS. My erroneous crossings (BETAS and EST) seemed reasonable. Maybe it’s one of those Shrödinger things.

Other than those stumbling blocks, pretty good fill with LAMBADA, ORDEAL, TOENAIL, RANDO, and the double helping of SPUNKY and UPTEMPO near the end.

Super clever theme though the actual entries didn’t shine as much as I’d hoped. But on the strength of the wordplay, four stars from me. 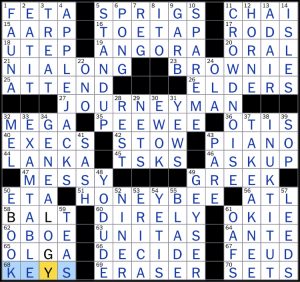 Today’s NYT is a Erik Agard/Jeff Chen collaboration that I really enjoyed.  spotting what was going on took a second, partially because this is more of a sound-based theme than a visual theme:

As clued, the five across entries should be ALONG, BROW, GERMAN, HUBBY, and GEOLOGY, but in taking a “knee” sound, become the answers above.  The right-left symmetry here (instead of standard symmetry) is nice, but the uneven distribution of answers feels a smidge off

A puzzle after IKEA’s heart…

As long as you don’t overthink it, this is a solid set of themers. If you start thinking too much though… well, a spikey-haired singer is a PUNK ROCKER. A clotheshorse is a SNAPPY DRESSER. But a chemist isn’t a PERIODIC TABLE… and a reporter isn’t a NEWS BUREAU. A reporter, of course, works in the NEWS industry, but alas a chemist doesn’t work in the PERIODIC industry.

So there’s that layer of inconsistency. But still a nice set.

Mostly solid fill rounds it out- AS WE SPEAK was particularly nice. Coulda done with out BAAS, OREM, and LOW–NECKED. I’d appreciate SKI POLE more if it weren’t slightly duped in the clue for 52D. 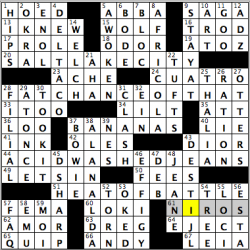 Good afternoon, everyone! Some winter storms are bearing down on a number of us in the next day or so, so hope you’re all prepared!

Today’s puzzle might have left you, well, puzzled, if you tried to find the theme and were not familiar with a 2017 New York Times bestseller. When putting together the first word of each of the four longest theme entries, in order, you get “Salt, Fat, Acid, Heat,” which is the title of a award-winning cookbook written by cook, writer and Netflix star Samin Nosrat. 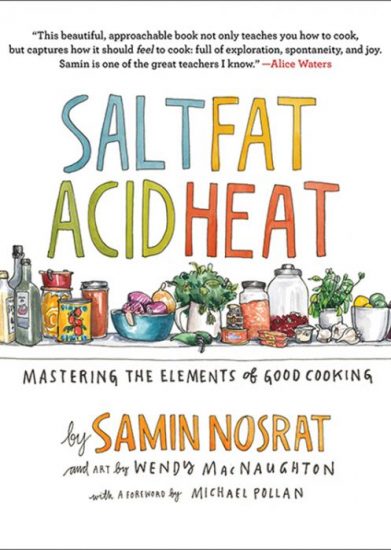 I knew of the book title that was the inspiration of the theme, but only faintly, and when I plunked in “bell-bottom jeans” instead of ACID WASHED JEANS, it hung me up even longer in trying to see what was going on with whatever theme there might be. Took a couple of minutes to get the bell bottoms out of my grid (and even longer to get out of my mind), and then I was golden after that. Totally was taken on a ride on memory lane with the clue for NES, as a few of my friends in elementary school used to go over to our friend’s place after school to play with the Game Genie and Power Glove he owned (39D: [Video game platform with a Power Glove controller]). Nice to know the tidbit in the clue to AFRICOLA (8D: [Soft drink that, despite its name, is actually German]).  There’s a Mexican restaurant chain near me called Dos Toros, and I initially wanted to put that in instead of the less-familiar (to me, at least) DEL TACO, but, obviously, it wouldn’t fit (4D: [Fresh Mexican grill franchise]). I had never heard of THALIA before today but, from what I just read, has been a critically-acclaimed musician, despite her relative anonymity in the music world (25D: [Punk rocker Zedek]). I’ll have to give a couple of her tunes a listen later on today!

“Sports will make you smarter” moment of the day: BODE (6D: [Alpine ski racer Miller]) – The United States has produced a number of standout skiers who excelled in international competitions, but Bode (pronounced “BO-dee”) Miller is arguably the country’s best-ever skier. Miller is the owner of six Olympic medals, winning two silvers in the 2002 SALT LAKE CITY games and three more medals in the 2010 Vancouver Olympics, including his one and only Olympic gold medal in the super combined discipline. Along with his Olympic success, Miller won four gold medals and a silver during World Championships competition, and is only one of five men — and 12 skiers in total — to win FIS Alpine Skiing World Cup events in all five disciplines (downhill, slalom, giant slalom, Super-G, combined).