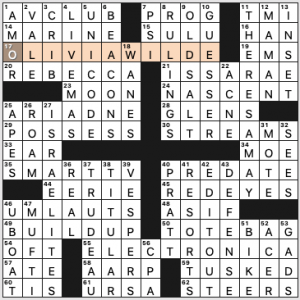 We’ve got a new constructor and he brings us some fresh, new fill in this pretty 68-worder. Among the highlights are actress/director OLIVIA WILDE (her Booksmart is on my to-be-watched list), actress/writer/director ISSA RAE, the AV CLUB (erstwhile home of the AV Club crossword, which is now the American Values Club crossword), SMART TV (which is handy for those STREAMS), ELECTRONICA music, Taco Bell slogan LIVE MAS, and ex-PM THERESA MAY.

There are some dry bits, like abbreviation PSI, roll-your-own GUESSER, and ACER as a noun. But overall, not much in the way of groaners here.

As usual, the first thing I noticed about this puzzle is the grid design, which tends to set the tone for how I go into the solve. Seeing the gorgeous wide-open stacks in the corners and the neat staircase through the center set me up to really enjoy this solve, and it (as usual, with an Agard puzzle) did not disappoint. 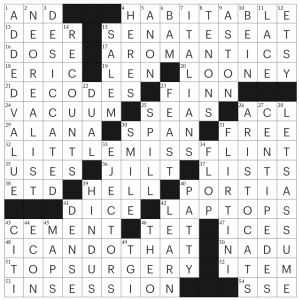 The marquee entry here, LITTLE MISS FLINT, is a perfect 15 that spans the grid and connects those otherwise segmented open corners in the NW and SE. Mari Copeny, aka LITTLE MISS FLINT, is a 12-year-old activist who has been advocating for clean water in Flint and beyond since the Flint Water Crisis began in 2016. I’m really excited to see her featured so prominently in this puzzle!

A couple other entries also stood out to me as particularly fresh and Agardian: TOP SURGERY and AROMANTICS. I’m always a little cautious of queer/trans content in mainstream (i.e. not Queer Qrosswords) venues for fear that a constructor might clue something insensitively, but Erik knows what he’s doing and clues both of these entries deftly.

Just to give those vertical stacks their due, I want to acknowledge ADDED VALUE / NEOREALIST / DESICCATED and ARISTOCATS / CENTIPEDES / LET’S ASSUME as some lovely, clean stacks held together with nearly impeccable fill (with the exception of Tamil NADU, which is a tad outside my preferred range of fill difficulty). I for sure thought DESICCATED was spelled with only one C, so I struggled there for a bit trying to figure out what else could possibly fit in that space.

One other thing worth calling attention to is the quality of the clues in this puzzle. Some are the straight-up trivia we sometimes see from the New Yorker (West Coast capital near Grand Ronde), but many are delightful and weird new twists on entries we see all the time. Some highlights include:

Overall, pretty much all the stars from me.

If you’re suffering from a HEADCOLD (65a, [Malady that accounts for four Across puzzle answers]), your Ms might sound like Bs, as they do in this puzzle’s theme answers. 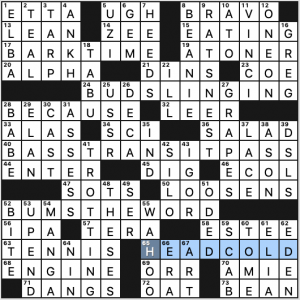 I feel like this is a really old puzzle theme, but it’s hard to search for other examples of it. Part of the reason is that it’s sooo wide open; there have to be a boatload of potential theme answers. Let’s see…off the top of my head, some words that can change from M to B are Mike to bike, marry to Barry, mile to bile, mess to Bess, mugger to bugger, mommy to bobby, etc. etc. I’d like to see some other kind of constraint here to tighten things up. These aren’t bad as far as letter-changing theme entries go; they aren’t forced and there’s humor here. But with such a wide open theme, I’d hope they’d all be lol-funny.

And the extra Ms really should not be there. Either you have a HEADCOLD or you don’t. You don’t get to choose which Ms come out as Bs. Again, with so many potential theme answers, find the ones where this is not an issue.

I have to say the fill gets pretty rough at times. There’s a heavy reliance on crosswordese and roll-your-own type answers, e.g. ATONER, ONE ON, ATO, COE, (and that’s just the NE corner), plurals-you’d-never-see DSLS and DANGS, plus SER, ORR, ELIA, AMIE, ODED, and A SON. That’s just all way too much for a solver to enjoy. And to top it off there’s a dupe between 8d BEANIE [Babies leader?] and 73a BEAN [Coffee __]. That SE corner can easily fixed in about five minutes. (I know, because I did it with OKLA and TEAM instead AMIE and BEAN; there’s probably something better out there, too.)

There are definitely some high points: RAT’S NEST (which I’m pretty sure I saw just this week somewhere), BEANIE (minus the dupe), and WAHOO [Large mackerel] which is never not fun to say.

Overall, though, it’s just not enough to overcome the weight of the minuses. I want to be encouraging, because I think this is a new constructor. There’s a good basis to build on here, but this one still needed a lot of smoothing out.

THEME: MIC has been dropped to the bottom of each theme answer (I’ve listed the theme answers as they would be before the mic drop, in the puzzle MIC is at the end of each answer)

Exceptional puzzle today that was so on my wave length and a joy all the way through. When I saw the instruction in 3D, I went directly to 31D and immediately knew DROP THE MIC which is a great answer to build this puzzle around. I loved the assortment of answers here – all really different but great for the theme and SOLID.

Great fill here too – with cluing I have come to expect and love from the Inkubator – BOSS MAN [“They let you dream just to watch ’em shatter/ You’re just a step on the ___’s ladder” (lyric in Dolly Parton’s “9 to 5”)] and LOVE LIFE [What single people are too often asked about] had my favorite clues today.

So much personality throughout the puzzle and a great theme so well done – I can’t say enough good about it.

This puzzle felt a little light on theme, but still worked and was a fun solve – just played a little more themeless. I did like how the horse answers were clued here, but I think one or two more themers – or several more in a Sunday-size would have rounded this out.

OPED PIECES, EVIL GRINS, CALL COLLECT, WOLF CUB, TAP A KEG and BLOOD DONORS added to the enjoyment of the solve, and made the puzzle feel really substantial throughout.

I really liked the similar tricky clues for NAME [Rose or Violet] and FORD [Ranger or Explorer]. But clue of the day goes to FLEW [Traveled like a monarch?]. 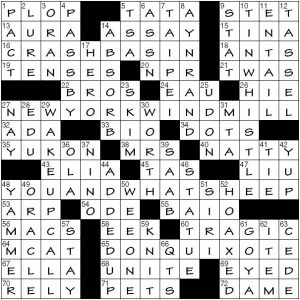 An appropriately literary theme this week.

A very inventive and enjoyable theme, literally substituting Quixote’s fantastical visions for their surrogates. And all three examples are iconic, even for those who haven’t read the novel. I recommend Edith Grossman’s relatively recent translation—though I confess to not having read it in its entirety. 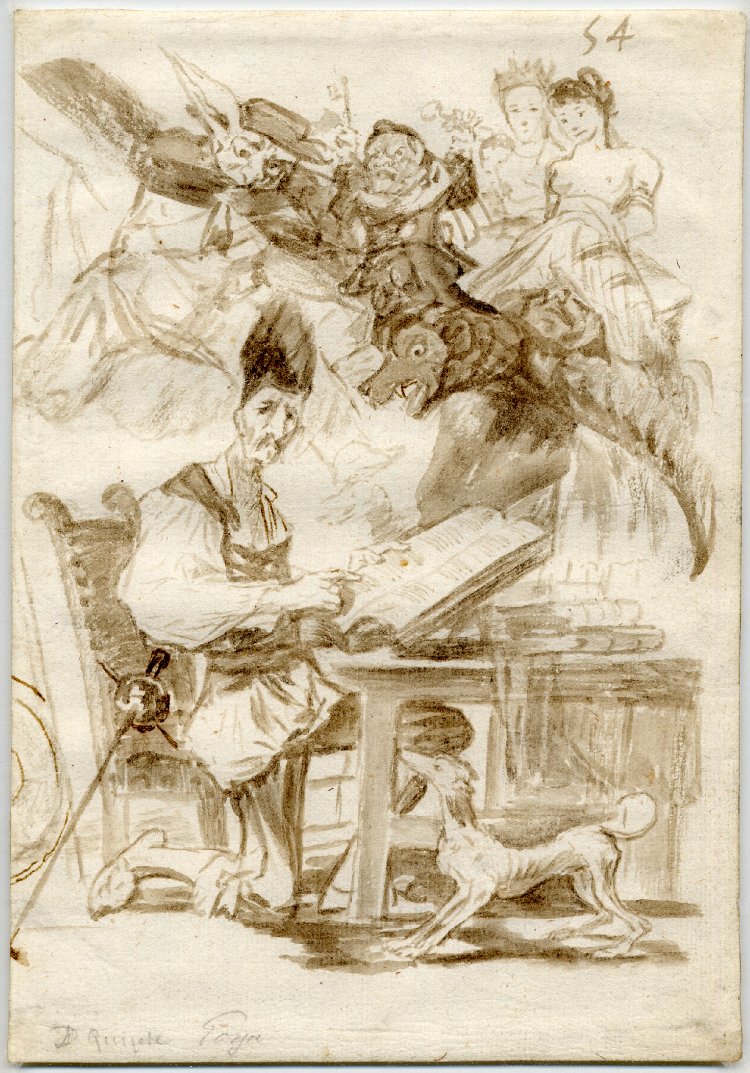