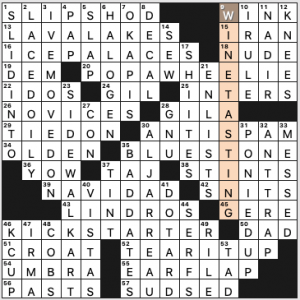 What is this, a 64-worder? The fill’s a bit zippier than you’d expect with that lowish word count. POP A WHEELIE, KICKSTARTER, TEAR IT UP, “I’VE MOVED ON,” SIDEWALK ART, BAD DATES, DOTARD, K-CUP, PONIED UP (I didn’t notice till now the UP dupe), and WINE TASTING with a clue ([Leisure activity for which you need glasses]) that had me thinking paintball or laser tag. I read the clue to my husband and he thought of eyeglasses (video games, reading) rather than safety glasses, and he may have sworn when I told him the intended answer. (The best tricky clues induce swearing, no?)

Ten things (it was gonna be seven, but there were more things I wanted to mention):

Nary an abbreviation in this grid, which is not easy to manage. GIL/DECAL could’ve been GIF/DECAF, DAD/MESSED could have been D.A.’S/MESSES, but no, no abbrevs. Four stars from me. 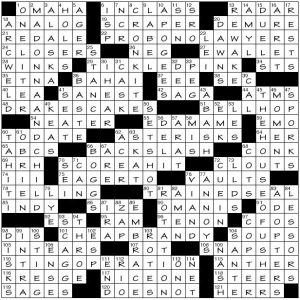 Musicians who go by one name, punned up.

The phrases are all recognizable enough, but the clues are uneven. For members of bands, it’s fairly easy, but those which simply reference ‘R&B singer’ or ‘soulful singer’ are enormously vague. Obviously we’re hampered by the fact that these are … drum roll …one-named celebrities (duh).

Slightly better are ones where at least some hint is included (e.g. Canadian rapper, colorful … singer). Madonna has a recognizable nickname, but the clue is problematic for another reason; unless you have reason to know (or care) that she has a daughter named Lourdes, you (by which I mean I) might be tempted to think of one-named New Zealander Lorde (Ella Marija Lani Yelich-O’Connor), who famously had a big hit with “Royals” in 2013 as a relative child of 16 years.

Aside from the theme itself undermining its own success, two other things soured me on this crossword. One was the last square I filled in: the crossing of 116a [Businessman for whom Kmart is named] KRESGE and 106d [“__ petit placidam sub libertate quietem” (Massachusetts motto] ENSE. Unless you know enough Latin or the state mottoes or an unusual surname, it’s a tough ask. S isn’t particularly intuitive here structurally. Calling this crossing horrendous might be an exaggeration, but I certainly didn’t care for it.

The other was the last across clue, so again something that’s fresh in the mind as the crossword is nearly completed. It’s 121a [München misters] for the abominable HERRS. Listen, if you’re going to use proper German in the clue (München vs Munich) then the answer should also be proper German; in this case the plural of Herr, which is Herren. Just clue it with the regional potato chip or something. 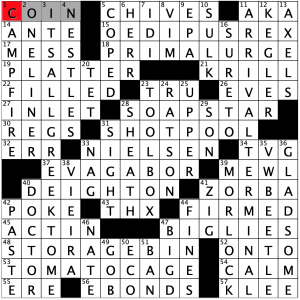 I am sure the weather in Los Angeles is a lot nicer than here in the midwest; Winter Storm Jacob is bearing down where I live and it might be dicey traveling for some periods of time this weekend. I guess I’ll just have to hunker down and do some puzzles! This puzzle has an impressive wide open stack in the middle, but overall this played fairly easy. Not surprising from Ed Sessa; his puzzles are normally made quite well. 4.5 stars for this one. 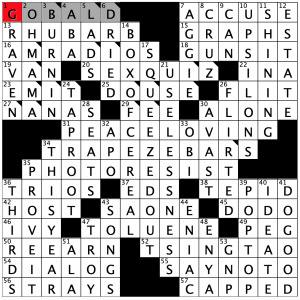 This one was a Stumper. I got a nice shout out this past week on the Fill Me In crossword podcast about Stumper solving, and the very next puzzle practically kills me! I went back to Across Lite to solve this one; someone updated it to work in macOS Catalina, and it nicely shows all of my blunders! Having said that, there are some great clues in here, and only one or two obscurities, so in the end I found it a fair but quite challenging puzzle. 4.6 stars today.

Some of that hard stuff:

As you can see, there was a lot to like here. I could have gone on! Have a great weekend!

Dallas Fletcher’s Universal crossword, “All in the Family”—Jim Q’s review

THEME: TV shows with family members in the title.

I’ve never seen any of these shows. I’ve heard of them, but the first three were off the air more than a decade before I was born… and the last one doesn’t appeal to me.

Taken alone these work well enough, though dated for sure. But together as a set it’s a bit wonky. SONS, UNCLE (which is an acronym in the title), FATHER, and SISTER. Where’s the other parent? UNCLE looks a bit weird in there… and SONS/SISTER feels off too… like it should either be BROTHER/SISTER or SONS/DAUGHTERS.

So I dunno. I like the idea, but maybe a solid set just doesn’t exist.