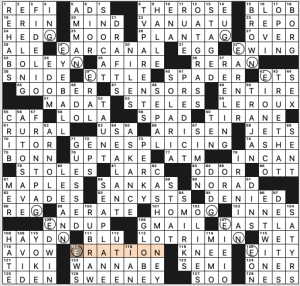 Okay, so a headache walloped me after I did the puzzle and before I set to blogging it. So I’m phoning it in. There may be typos. (I have fixed three already.)

I figured out the theme gimmick with the first diagonal GENE forking off in two directions mid-entry:

Neat theme; I liked it a lot. Clever riff on a biotech topic from our professor of biomedical engineering.

Some of the longer fill was nice (AUTOSAVE, THE ROSE, some CASH MONEY, and if you think CASH MONEY is a dumb phrase, well, I like to say it for fun), but there was also a noticeable smattering of crusty crosswordese—EDO SPAD ENA were the most glaring offenders.

A back and forth experience today.

THEME: Partner phrases where one phrase suggests a reversal of a particular item hidden in the other. Does that make sense? I tried. Open to wording suggestion there.

Really like the concept behind this one. At first, I was expecting the word in the first phrase to be reversed… so in REVERSE DUNK, I assumed the partner phrase would have KNUD in those circles. That would be less satisfying as it’s too much of a gimme and doesn’t add the extra layer that comes with discovering SLAM. I think all of the phrases work equally well… at first NURSE–MIDWIFE gave me pause. I’ve heard of a NURSE. I’ve heard of a MIDWIFE. But NURSE–MIDWIFE was new to me, though it’s very much a thing.

Other areas that gave me pause were mostly in the name department, though fairly crossed as per usual. Those included REX, ELSTON, RUPERT, ELI, OSKAR, SETH, READE, ELLE, DYAN, YEUN, and SAMUS. On the flip side, there were a lot of names that were familiar. I guess what I’m saying is that it felt name-heavy.

Feel like I’m seeing Paul Coulter puzzles all over the place! Not that that’s a bad thing. They’re typically well-constructed.

I’m finally appreciating this theme after initially just thinking that it was a word split up for no particular reason. I found “station break” an odd way to clue TRAIN STOP, but accepted it. In fact, no. The “station” is “broken up”… TRAINS / TOP. MISERABLE means “down” and it’s “torn” MISER / ABLE. A TRIMESTER is a “period” and its “pieces” are TRIM / ESTER.

The last one is the weakest of the bunch: A decision is a NO BRAINER (I don’t think of a NO BRAINER as a decision per se), and when split it’s NOB / RAINER (RAINER doesn’t strike me as common enough knowledge to be part of the theme in this type of puzzle).

All in all, pretty cool! Here’s how I started the write-up before I realized what was happening:  I’m left feeling like a layer is missing or perhaps I’m not getting something. Like, I see that “station break” is in the clue for TRAINS/TOP and… Oh…..

I really enjoyed that post-solve AHA! Thanks, Paul! 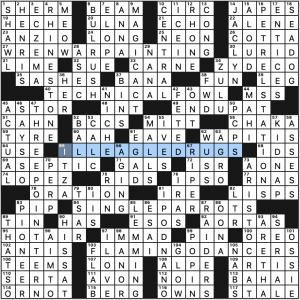 These work. Some are old puns (like foul/fowl) but nothing feels overly forced and it’s all in good fun. 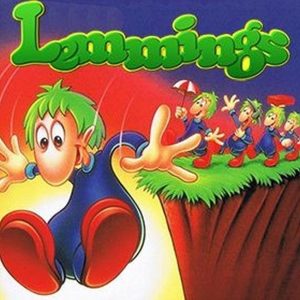 Moving on to the fill, I’m liking ZYDECO, RHINESTONE, BULRUSH (though it’s usually seen in plural form I think), ARISTOCRAT, IPOD NANO, MAGIC ACT, PIONEER, RAIDERS, and LEMMING. If you’re a gamer of a certain age, perhaps you played 1991’s Lemmings in your youth, the puzzley game in which you have to guide the little critters to the exit without having too many of them fall to their doom. Hey! Apparently, there’s a modern version for iOS and Android.

There’s a fairly heavy reliance on crosswordese in the fill, but nothing too egregious. I did get tripped up in a couple areas though. I put in ILENE for 22a‘s [Idaho’s Coeur d’__ River], but the crossing is JACLYN [She played Kelly on “Charlie’s Angels”], so that was an easy fix for me. I’m old enough to remember the old show and JACLYN Smith’s name spelling, but others may have had a tough time with that crossing. Or maybe not since the A seems inferable. The other thing that really slowed me down was 62a WAPITIS [Rockies roamers]. I didn’t know this was another word for elk. I like this word better. Read more about the usage and history of this word here. But the crossing with PCPS [HMO doctor designations] was what got me. On the military side, we use PCMS (primary care managers). I thought PCP always meant “angel dust.”

Solid, punny theme. A fair amount of clunky fill weighed things down, but the sparkly stuff made up for it.

Took me a hot second to figure out what was going on here, but turned out to be a lot of fun!

Loved this one! So quirky. So clever. The answers actually helped me to interpret the clues, not the other way around, and it was always fun to figure out. Great title too. As the clues are somewhat ENCODEd (booooo to having a variation of the word CODE in the fill and in the title!), there’s a “Postal Code” happening.

Solidly filled as well. Standouts being SPAMBOTS, ATE LIKE A PIG, and SMART CASUAL.

BAD PERMS? I literally laughed out loud at that. Is that an in-language phrase??? And pluralized??? Hey, it made me laugh, so it passes my backwards smell test.

Best Universal I’ve done in a while.