Note: There is no WSJ puzzle due to the MLK holiday. 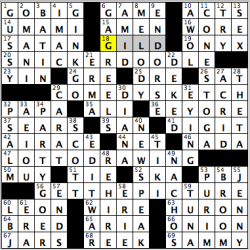 Hello there, everyone! Ade here once again as Jenni continues to make all of us envy her and her family as they are currently on vacation in Hawaii while a lot of us just dealt with snow at some point over the past 72 hours!

Today’s grid, brought to us by the ever-busy-with-crossword-constructing Mr. Evan Kalish, gets us to seeing the big picture, in a way. The first three theme entries are multiple-word and/or multisyllabic answers in which the end word of the entry is also a word that can describe a type of picture. The final theme entry, GET THE PICTURE, acts as the reveal (56A: [Comprehend…or what 20-, 29- and 47-Across do, finally]).

Not only do we get one of the Great Lakes in a grid in ERIE (58D: [Great Lake bordered by Ohio]), we get a second of the quintet featured in HURON (63A: [Lake into which Michigan’s “thumb” juts]). I’m sure Great Lakes fans would find this grid Superior to the rest of the puzzles they might solve today! (*Collective groan,*  I know!) In my rush to solve the grid in five minutes or less, totally made a mess of it in the Northwest, putting “Irani” instead of OMANI (2D: [Neighbor of a Saudi]) and, in turn, putting “aroma” instead of UMAMI (14A: [Savory food quality]). Not as familiar with the phrase GAG REELS as opposed to “blooper reels,” the latter which I totally had in mind when I first saw the clue (6D: [Collections of funny outtakes]). Did not know that JENNY was the name for the animal referenced in the clue (55D: [Female donkey]). One of these days, someone is going to clue ONYX as referring to the popular early 1990s hip-hop group, and the group is definitely crossword worthy because of the hit “Slam” that I’m sure you’ve heard the chorus to many times before (19A: [Black gem with bands]).

Liked the paralleling fill of CONESTOGA (11D: [Kind of wagon for pioneers]) and PARTYGOER (34D: [One attending a shindig]). My personal favorite entry was the very to-date EDIT WAR, something I know a few of my friends have engaged in when trying to make some edits on the platform (43D: [Back-and-forth changes to a Wikipedia page]). I’m glad that there, more than likely, won’t be any sort of edit war on the one and only page in which I appear on in Wikipedia…unless someone wants to add my crossword-blogging work!

“Sports will make you smarter” moment of the day: SATAN (17A: [The Devil]) – How many of you remember when Satan did his best work on ice?!? Former National Hockey League player Miroslav Satan (pronounced “shuh-TAN”) played over 1,000 career NHL games between 1995 and 2010 and, in six different seasons, led the Buffalo Sabres in points scored. Satan, who was twice named an NHL All-Star (2000, 2003), ranks eighth in Sabres history in goals scored with his 224 career tallies. As a member of the Pittsburgh Penguins, Satan won a Stanley Cup in 2009. Unfortunately, Satan never once played for the New Jersey Devils. Talk about a missed opportunity!!

Thank you so much for your time once again, and have a great rest of your day!

There’s so much I like about this Monday puzzle – let’s dive in! 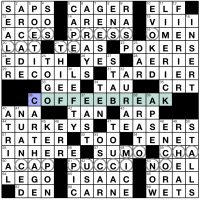 Each of the sets of circles contains a type of coffee whose name is broken across multiple entries. Clever! A lovely revealer, symmetrically-placed theme entries, no duds among the themers. Check, check, check. And, the puzzle is by a woman whose name I’m not familiar with, so time for me to go find her previous puzzles and hope for more! The fill was clean, which allowed me to glide right through the puzzle. Fun!

Are they making these things squares-first over there?? This is yet another beautifully designed grid showcasing Natan’s unique crossword voice (and I guess the fact that his voice is again so clear means that probably they’re not designing them squares-first, but I just don’t see how else you get such pretty designs!). Like a lot of Natan’s puzzles, this one is heavy on music, and like a lot of New Yorker puzzles, it’s also quite heavy on names I didn’t know. There were a few places I’d have liked to see different fill, but in general I very much enjoyed solving this (and, for anyone who is comparing my times with and without coffee, this was a pre-coffee solve, so I think it was probably easier than I experienced it). 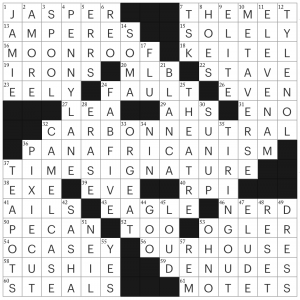 The central staircase was actually one of the easiest parts of the puzzle for me; I wrote in CARBON NEUTRAL and PANAFRICANISM with very few crosses, but TIME SIGNATURE (Measure for measures?) took a lot longer to click. I think the crossing of [Measure for measures?] with [Royal Shakespeare Company’s work] threw me off (and is also super elegant cluework). Other long entries that were highlights include PENNY LANE, CAMEL CASE, and METAVERSE. I only recently learned that CAMEL CASE is what you call capital letters in the middle of a word (like eBay and iPhone, per the clue). It’s a great entry. I could tell I was undercaffeinated because I confidently filled in ABBEY ROAD instead of PENNY LANE on my first pass.

The abundance of proper names and music clues in this puzzle likely threw off some solvers (myself included). In no particular order, here are just the proper names I didn’t know: JASPER Johns, Harvey KEITEL, Kwame Nkrumah, TOO $hort, Seán O’Casey, Graham Nash, BLANCA Magrassi Scagno, Jessica Wynne (whose photography I have now looked up, and you probably should too, if only to see the Do Not ERASE series named in the clue).

Similarly, *lots* of music in this puzzle: THE MET, LEA Michele, ENO, EVE, TOO $hort, OUR HOUSE, MOTETS, La Scala, PENNY LANE, (and for some reason, REM clued without reference to the band!). I did know most of these, but I have never heard of a MOTET.

Overall, I enjoyed this puzzle. I think it’s beautiful to look at, and although it was chock full of artists and activists I didn’t know, I always feel like I’ve learned things I am glad to have learned when I solve Natan’s puzzles. Many stars from me. 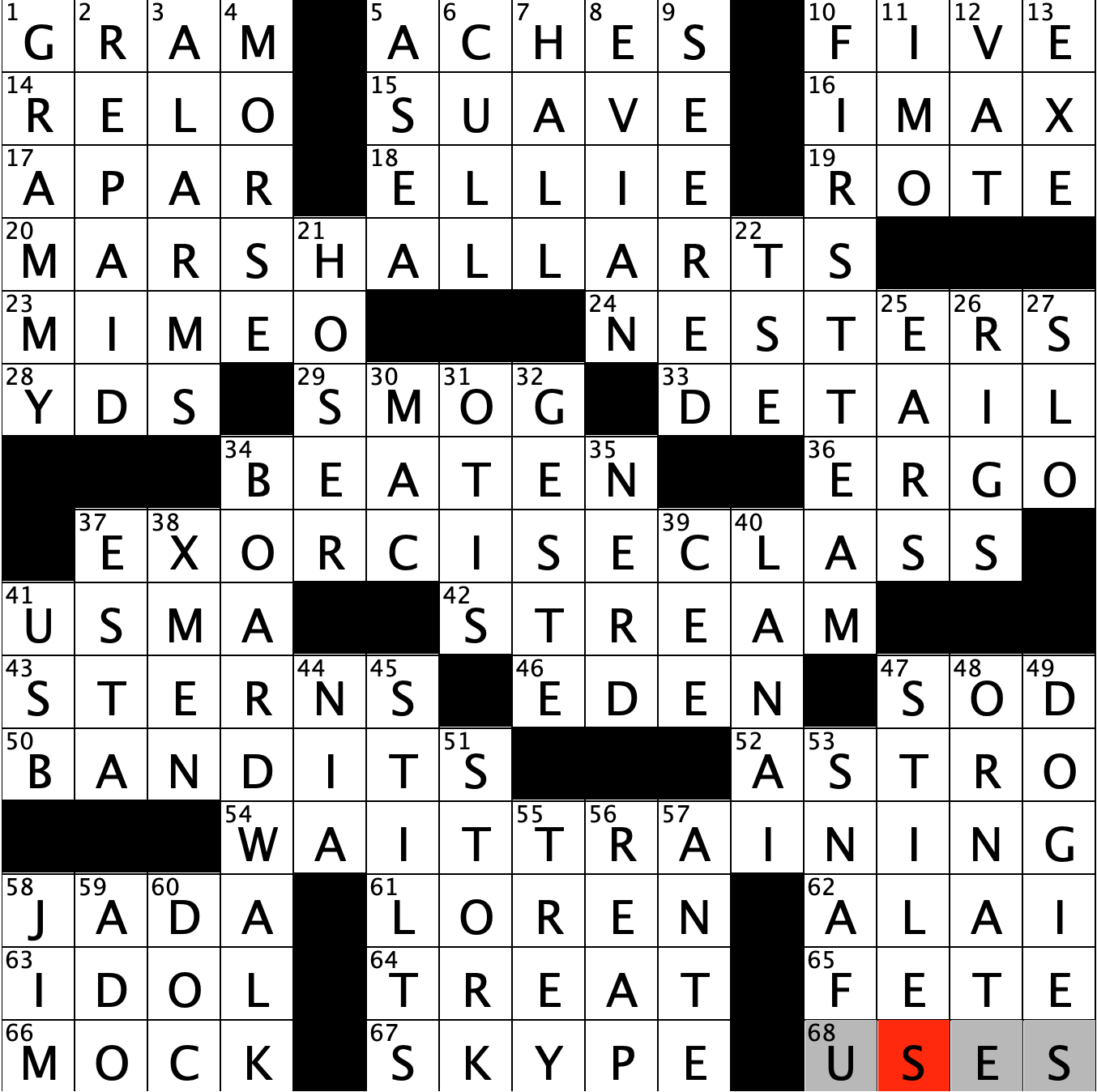 Fun, entertaining puzzle to kick off the week. It’s a cute theme – with a tight set of answers with great clues. First one I solved was EXORCISE CLASS which made it a little easier to figure out MARSHALL ARTS by the time I hit WAIT TRAINING I knew what we were going for here.

Overall the puzzle was smooth and clean – no sticking points in the fill, with the southwest probably my favorite quadrant – The BOARDWALK/BANDITS crossing put a fun image in my head which always increases my level of enjoyment.

Side note – was a bit surprised to see that none of today’s puzzles were in honor of Dr. Martin Luther King Jr. – until I solved USA Today – great puzzle to celebrate MLK Day over there – highly recommend solving.

I wonder if John Goodman, Jeff Bridges, and Steve BUSCEMI all realize they have the same number of letters in their last name, and that would eventually cause someone to get very frustrated? 40D [“The Big Lebowski” actor].

I’m accustomed to struggling with a corner of a BEQ themeless, but this one was more of a struggle than usual, and I finally gave up entirely on the SW. Felt like a ton of unfamiliar and uninferable names, or some that couldn’t find their way off of the tip of my tongue like ALEXANDER CALDER. Seems like the south became trivia night, only without the help of drunken friends. 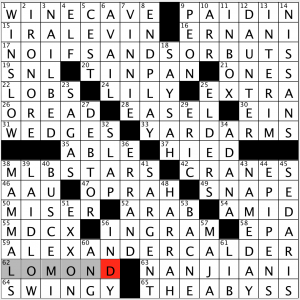 The top half, however was a lot more fun. Loved 1A [Red room?] WINE CAVE. Could that be a wink at Mayor Pete? Had no problems with IRA LEVIN (or SEDARIS in the south for that matter… but I can see why some would). Figured ERNANI entirely by crosses (still not sure what ARR is though…). And got NO IFS ANDS OR BUTS with no crosses whatsoever (doesn’t that feel good? to get a grid-spanner with no crosses?)

Winning clue for me was 18D [Reacts to something depressing?] SAYS AH.

For me, however, this one hurt. A lot of trivia and not a lot of fun wiggle room to infer the tough stuff.