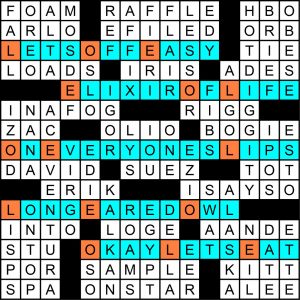 Title: “New Order”
Prompt: The meta for this puzzle is a band that would complete this puzzle’s theme.
Answer: Electric Light Orchestra (ELO)

Not gonna lie, this one had me worried there for a bit! Over 400 correct solves when I began this afternoon, so I figured it’d be a snap. But then…

The five long entries were:

50a. [Bird whose most prominent feature makes it appear surprised], LONG EARED OWL

62a. [Preprandial exhortation], OKAY LET’S EAT. A little fudging there with the arbitrary “okay,” but okay.

I confidently scanned the theme entries for patterns, but…just couldn’t see it. Lots of L’s and O’s and E’s and R’s, but nothing that would hang together convincingly. How about ROFL in the second themer? Led nowhere. The last four letters of each are EASY, LIFE, LIPS, DOWL, and SEAT. What’s a DOWL, though? Hmm…was I really going to whiff on a January that 400+ other solvers had gotten? A panic began to rise within my soul…

…OK, calm down. The prompt asks for a band that completes the theme, and there are five entries. So we need a sixth…OK, now I see it! There are six permutations to a group of three different letters, and it’s not strings of letters we’re looking for, but initials. Which are LOE, EOL, OEL, LEO, and OLE herein; the only permutation missing is ELO, so we need a band whose initials are — well, ELO, which makes it pretty easy.

Pretty nice January — easy, but with the potential to put a little scare into you, at least in my case. A fun start to season 9 of the Muller Monthly Music Meta, which by the way is now solvable at the Washington Post! Very cool.