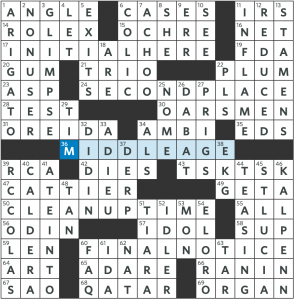 This week, we’re looking for a five-letter word. Let’s get right to it.

Seemed pretty obvi that the five letters of the answer were going to be extracted according to something suggested by the themers, in order — initial, second, middle, cleanup, final — but extracted from what? Not from the other words in the themers — if you take the first letters, you get HPATN. If you use the ordinal adjectives to index the other words, you get HLGME. So we’ve got to find something else … in the grid? Where?

It was at this location that I found myself stuck, so I sent up the flag for a hint. Was told:

“Themers are what you think the are. You probably tried to apply mechanism to themers to no effect. Look hard at the clues w/ themers in mind.”

And … more flailing, and another suggestion to examine the clues, with attention paid to the non-ordinal words in the themers, and … oh!

Then index those entries per the ordinal words in the themers:

… and you get ORDER, which is a five-letter word and our answer. Clever mechanism! I did like this quite a bit. I had previously thought the position of cleanup, in an order, was the last thing/person, but a little research revealed that the cleanup batter is generally the fourth in the lineup and not the last — whether ultimately the final, penultimate, or some other position would depend on the outcome.

It’d been a loooooong time since I’d listened to Double Fantasy all the way through, so here’s “Cleanup Time” for y’all: