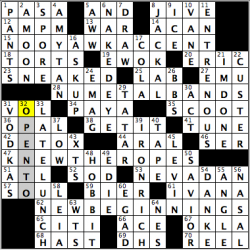 Good day, everyone! Hope all is well with you as we head towards hump day!

Today’s grid is fun with homophones at the beginning of theme entries, with the first words in the first three theme entries pronounced like “new,” but not spelled in that fashion. The fourth theme entry, NEW BEGINNINGS, acts as the reveal (62A: [Today’s theme (and alternate puzzle title)]).

I usually pride myself in recognizing lesser-known cities and towns, but Pahrump, in the clue for NEVADAN, is a new one for me (53A: [Resident of Reno or Pahrump]). I’m almost always at a lost when I have to get the correct letter combinations down for different types of cars mentioned in grids, like XTS here (43D: [Cadillac luxury sedans]). Can’t say that I’m waiting with bated breath for the next time I come across a clue like that. Favorite fill of the day was IRON-RICH, even if I don’t consume much of either food mentioned in the clue (39D: [Like lentils and spinach]). NAKED EYE was also pleasing to the eye (6D: [Unassisted vision, with “the”]). Have to head out right now to go down to the locker rooms in Boston (at the Lakers-Celtics basketball game), so I’M DONE with this section of the blog (21D: [“All finished!”]).

“Sports will make you smarter” moment of the day: TATAR (29D [Volga region resident]) – Current National Hockey League forward Tomas TATAR is a Slovak-born left winger who currently plays for the Montréal Canadiens. Drafted 60th overall by the Detroit Red Wings in the 2009 NHL Draft, Tatar spent his first six seasons with the Wings and record three 20-goal seasons, with his high watermark coming in 2014-15 when he scored 29 goals and had a career-high 56 points.

Thank you so much for the time, everybody! Actually, DANKE (54D: [German “thank you”]). Have a wonderful rest of your day and, as always, keep solving! 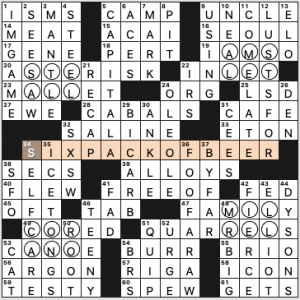 The theme is 34a. [Party purchase … or a hint to each circled letter set], SIX-PACK OF BEER, and the theme answers are the 6-letter beer brand names that appear in the circled/shaded squares in clockwise order: STELLA Artois, AMSTEL, CORONA, and MILLER. I solved without paying the slightest attention to those circled squares, which made for a rather dull solve. My experience was colored by hitting ISMS right at 1-Across and then expecting to find more blah fill. Looking back at the fill now, it’s solid, but it felt blah while I was working the puzzle. I do like FOOFARAW and SELF-CARE, but COME LATE feels weird. 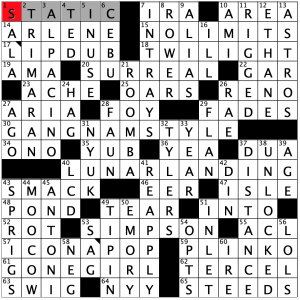 This week, we move on to 2012 and 2013 events and notable occurrences. Funny how time flies! There are a TON of thematic entries in this one; I tried to find everything that had 2012 or 2013 in the clue:

There is even this clue:

Any way you slice it, that is a lot of thematic entries! I count ten of them, including the last one. Not all of them are symmetrical, but for this type of puzzle that didn’t trigger my OCD. Perhaps some of you might disagree! 4.3 stars for this one; I wonder what will be highlighted form 2014 and 2015? 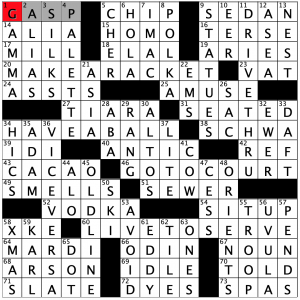 Have I mentioned I have a son named Chase? So right away, this constructor is OK with me! This puzzle is timely, what with the 2020 Australian Open just now underway!

Yes! Game, set and match! I love tennis, so this puzzle hits all the boxes for me. It is not easy staying up all night watching tennis, which is why I won’t be doing it! Maybe I will set an alarm for the finals matches at 3am in a couple of weeks! Nice puzzle, Chase! 4.4 stars.

The title of this puzzle, “Finish What You Start,” seems like quite the January / New Year’s resolution phrase! Let’s see how it manifests: 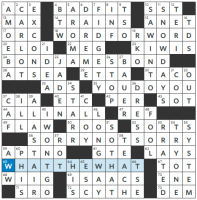 18A: WORD FOR WORD [Verbatim]
24A: BOND JAMES BOND [007 introduction]
35A: YOU DO YOU [Encouragement of individuality]
44A: ALL IN ALL [On the whole]
56A: SORRY NOT SORRY [Sarcastic apology]
63A: WHAT THE WHAT [Exclamation of disbelief]

I really liked this puzzle! The theme was simple, straightforward, and well-executed. Plus, many of the theme entries felt incredibly modern and fresh, including YOU DO YOU, SORRY NOT SORRY, and WHAT THE WHAT. Lots of theme-related fill in a tight grid with not much junky fill – what a fun solve! I really like that each themer, like the title says, finishes the same way it starts.

Other thoughts:
– [High heart] for ACE was really clever cluing.
– I don’t know much about fantasy literature, so I’m going to need to keep studying up on entries like ORC and ELOI (though I know that’s my fault for not knowing those!).
– There was a nice group of women featured in this puzzle, which made the puzzle that much more enjoyable to solve! The women included ETTA Jones, Kristen WIIG, Susan ISAACS, Sen. Warren, TERI Polo, Emma Watson playing MEG in “Little Women,” and Brenda STARR.

Another day, another Paul Coulter puzzle! Does he ever take a break??

THEME: Phrases that mean “Beat it!” are aptly clued with professions.

I read that last one as “Scram, barkeeper!] and was thoroughly confused until now.

Fun theme, and the set feels very tight, though I do wonder how often meteorologists fly kites. I only associate kite flying with Benjamin Franklin, and I think that turned out to be a myth anyway.

The one thing that bothers me about the grid is that the the fill is often longer or the same length as the theme answers. For instance, both CARTWHEELED and MOTHER-IN-LAW are 11 letters long, which is longer than any of the themers. GET LOST and BUZZ OFF are also competing for attention with a slew of 7 letter entries.