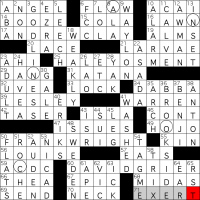 hello and welcome to episode #607 of matt gaffney’s weekly crossword contest, “Initial Public Offering”. for this week 3 puzzle, matt challenges us to name a famous British author. okay. what are the theme answers? five celebrities with three names are given with only their first and last names appearing in the grid:

the omission of those middle names is quite conspicuous, but what next? well, the title suggests the initials, and each of the five theme answers has a three-letter monogram which is hidden in the grid—as a four-letter entry with one extra letter:

this is a very elegant meta. it felt easy to me for a week 3—each step is quite strongly indicated, i think. the title is a very nice double-nudge in the correct direction, both because of the word “initial” and also because the phrase “initial public offering” itself appears in crosswords so often as the initialism IPO. unlike in a few notable recent metas, all five of the theme answers were people i knew, and the meta answer itself was at least as famous as any of them. so that was great, too.

i’m actually rather relieved to get an easier week 3, since i didn’t even get to this until monday night and my brain was pretty fried after mystery hunt. but enough from me. what’d you think of this one?