Neat double theme today from Ross Trudeau. MORAL HIGH GROUND (39a, [What the righteous may claim, and a hint to the starred answers]) is the revealer, but what is it hinting at exactly? At first, I noticed that each theme answer starts with a building associated with religious practices: Temple, Seminary, Cathedral, Mission. I thought, “That’s cool…but that’s it?” No, that’s not it.  But wait, there’s more, as they say. Each theme answer also ends with a “high” geological formation: Mount, Ridge, Peak, Hill. “High ground”? Get it? How cool is that! 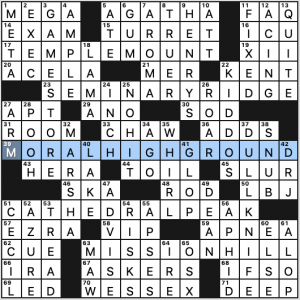 Now, I’ve only heard of one of these for sure (TEMPLE MOUNT). I think I’ve heard of MISSION HILL, having never been to Boston, but I’m not sure. But my lack of knowledge didn’t slow me down (too much), and it doesn’t bother me at all when a theme is as tightly-defined as this one. I’m really impressed with these finds and Ross’s ability to get everything to fit symmetrically, and with a lovely grid-spanning revealer to boot. Mwah! I’m wondering if he had any other theme answers he had to leave on the cutting room floor. I know there’s a Cathedral Rock park in San Anotnio but that’s it. Apparently there’s also a Cathedral Rock mountain here in my home state of Washington. 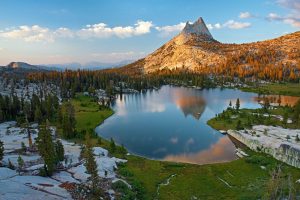 CATHEDRAL PEAK in Yosemite National Park. I can see why they named it that. (Photo from flickr.)

Turning to the fill, it’s solid though not necessarily sparkly. GAME STORE and DULL KNIFE are in the marquee slots, and are pretty good considering they each cross three themers. KIDDOS [Elementary teacher’s charges] is my favorite entry, and HENRYS [Eight English kings] and ASKERS [Inquisitive folks] are at the other end of the spectrum. Everything else is good to go. 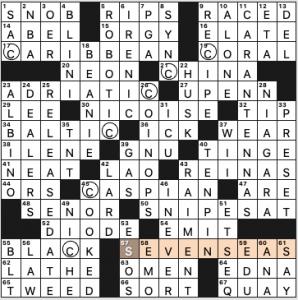 This looks to be Alex’s fourth NYT puzzle in the past 6 weeks or so. That is quite a lot!

The theme is the SEVEN SEAS (57a. [Result of connecting the circled letters in a certain way, in a punny manner of speaking]), which I would like better as THE SEVEN SEAS. The other themers are seven sea names, clued mostly in other contexts, and each one contains a circled/shaded letter C:

I like the theme concept much better than the execution.

Three stars from me. The theme didn’t quite jell for me, and I wasn’t captivated by the overall fill and clues. 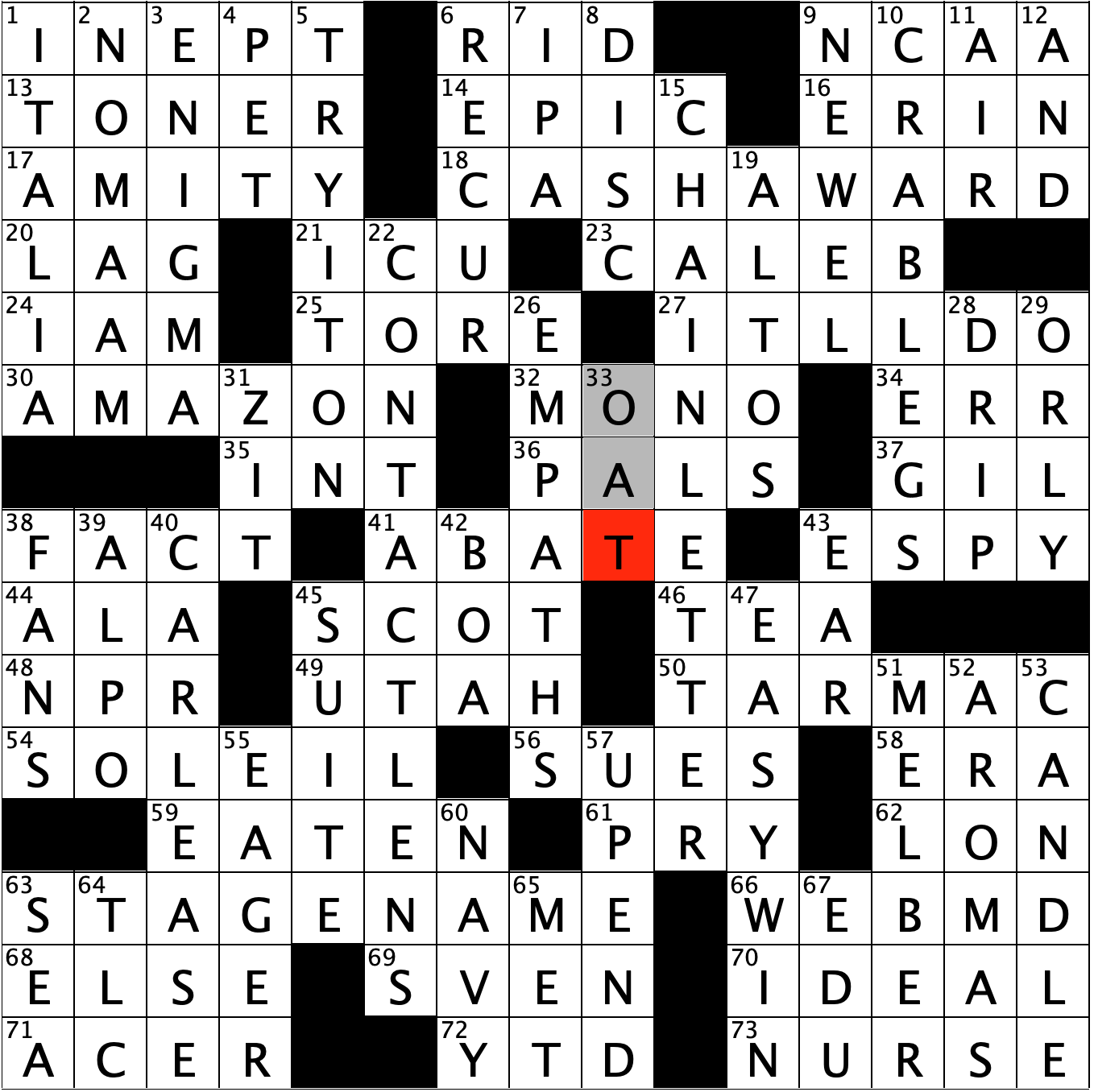 Only time for a quick write up today. Cute theme with CANDLE parsed as C AND LE to describe the theme answers. I thought the themers worked well and the revealer was a fun surprise. I particular liked the choice to have the theme answers run vertically in a CANDLE-like fashion.

Construction-wise I thought the northwest was beautiful. Favorite fun extras in this puzzle were TRY IT ON, ENIGMA, and STAGE NAME. 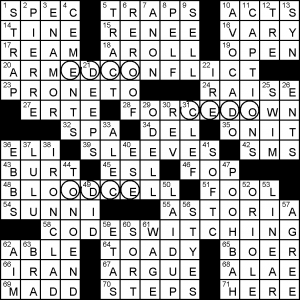 The hide “scrambled variations of a word in long phrases” theme type is feeling rather overdone in the last while. Today’s puzzle wins mostly with its revealer: the colourful CODESWITCHING. I code-switch all the time between English and Afrikaans. Although written communication is easier to keep down to one language, I still have to control the urge here sometimes. The answers themselves are more functional: ARM(EDCO)NFLICT, FOR(CEDO)WN and BLO(ODCE)LL.

Tricky parts: [Coffee cup insulators], SLEEVES – wanted SCARVES?! To be honest, I didn’t realise those cardboard thingeys had a function beyond increasing waste. [Cupid’s wings], ALAE is some seldom seen and difficult Latin vocabulary. I personally come across it mostly in reference to the wings of the ilium, but YMMV. [Roman three], TRE – modern Roman, not III. 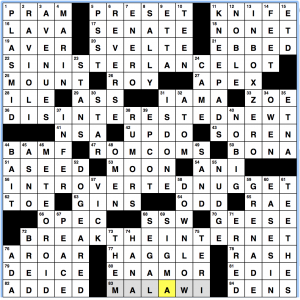 I felt a little out of sync with this AVCX’s theme, even though it should have been right in my wheelhouse:

Each “meme” here breaks up the word internet across its length.  That’s the theme.

This was alright – the theme clues feel meme-ish (if not really meme-worthy), but it also felt a little harder to know if I had the right phrase given their slightly odd nature.  As a whole, this felt okay.  Just okay. Other fill notes: