Two things slowed me down with this puzzle. One, not being on the right wavelength for many of the clues. And two, the aroma of my lunch which was sitting right in front of me waiting to be eaten. I fought through the first and well, caved in to the second a little bit, but I got there in the end.

Paul Coulter brings us a bending theme which features four two-word phrases whose second words can all be synonyms for “plunge.” These second words are turned in the Down direction and are all clued [Goes down]. The revealer is in the middle at 42a [Acting after much hesitation, and a hint to four answers in this puzzle]: TAKING THE PLUNGE. 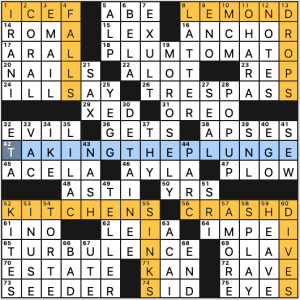 Nicely executed theme. There’s a lot of material here taking up a bunch of real estate. This makes for heavy constraints on the constructor, but in this case, everything is handled well and flows (haha) smoothly with only a couple scowly entries. We get bonus lively long Across answers PLUM TOMATO and TURBULENCE, however the marquee answers in the Down direction, MOROSELY and DETAINEE, are, well, Downers (haha) to a degree.

I liked seeing TELLER clued as [Penn pal] and ANCHOR which goes along with the submarine clue. I’m not so keen on old crosswordese AYLA [Auel heroine]; I thought constructors had left this author and character behind, but I’ve seen both now recently. The other deep cut was INO [Theban queen who was the aunt of Dionysus]. Yikes.

The other thing that puzzled me was the title. Is there a definition of “pitch” that’s similar to “plunge”? The closest I can figure is using the definition of swaying (especially aboard a ship), but I don’t quite see how that’s the same. I’m happy to hear comments on this from the solving public.

There’s not much in the clues that I particularly noted, so I will leave it there. Nicely executed bending theme. 3.8 stars.

Peter Emailed me to say he’d really like to publish more crosswords by women after I mentioned that he hasn’t. I suggested he get in touch with some of the (male) editors and indie puzzlemasters who have managed to actually publish more crosswords by women. No idea if he’s actually done that. He asked me to pass on the link to his spec sheet and told me that he has provisions for assessing submissions blindly to reduce the risk of of bias.

Peter’s spec sheet says “the puzzles are hard.” Not this one, even for my jet-lagged brain. There are some fun entries and I enjoyed solving it nonetheless. 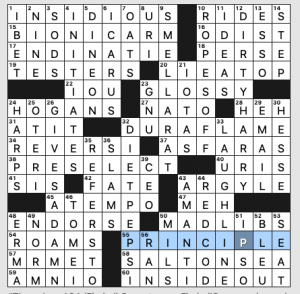 What I didn’t know before I did this puzzle: that there was a 2010 horror film called INSIDIOUS, and that DIRTY HARRY carried badge number 2211. 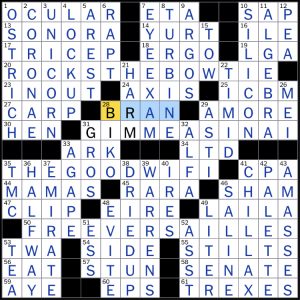 I couldn’t immediately catch what was going on with Barbara Lin’s puzzle today, but I was pleasantly surprised once I did :

It’s a bit of an anticlimactic revealer, but four common-ish phrases have had a phonetic “I” sound added to their end – we’ve got ROCKS THE BOAT, GIMME A SIGN, THE GOOD WIFE, and FREE VERSE getting modified.

Another Universal where the grid is circle-dependent. And of course, Universal cannot support circles in its grids, so instead, the casual solver is asked to count letters. Seasoned solvers may find their way over to this site and download the .puz file, where David has graciously included circles. But 99.99% of solvers are left without the visual and are tasked with counting. What’s more ridiculous is that I’m willing to bet that Universal runs far more “circle dependent” grids than any other publication. That’s what it feels like anyway. 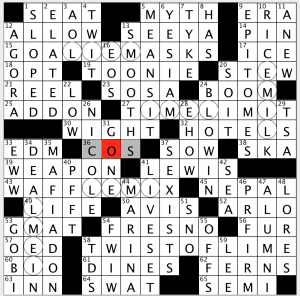 THEME: The word LIME is “twisted” in common phrases.

Okay, so advocating for the novice/casual solver, I’m not a big fan of this grid. I know from coaching novices through crosswords that this one in particular would be frustrating. For a few reasons.

2.4 Stars from me with circles. 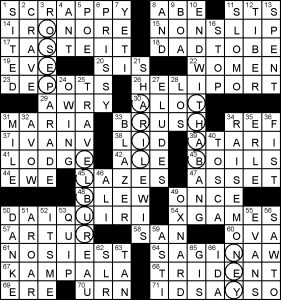 Today’s 16-square tall puzzle features more words hidden in long phrases. Today features different words, tied together by RAISEMONEY. I think circles were used to reduce the difficulty in seeing the pattern. In any case, they spell PESO, RUBLE, LIRA, BAHT and YEN; with the last found in the revealer for a cute bonus.

Favourite answers: DADTOBE, XGAMES, DAIQUIRI and KAMPALA. If you’re going to use a K, Q and X, use them for answers like that! Also fond of SAGINAW for some reason, though I know it only from S&G’s America.