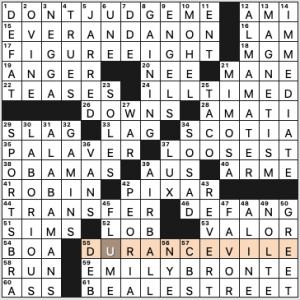 Stella’s back in the pages of the New York Times with her first puzzle in a decade. Welcome back, Stella! For your next Saturday puzzle, though, let’s get some tougher clues. This one played like an easyish Saturday (but supra-Friday level).

The hardest thing in the puzzle was the rather archaic term DURANCE VILE (55a. [Fancy term for a long prison sentence]). I definitely hesitated at that first letter, with the 55d. [Nebraska senator Fischer] crossing. I wasn’t sure if it was DEB or JEB, and if DURANCEVILE or JURANCEVILE was more plausible. It’s DEB (a GOP senator).

From Stella’s notes at Wordplay: “Over the last couple of years I began to pay attention to gender and racial/ethnic underrepresentation in the crossworld. I started to feel like I should construct again to put another woman’s voice out there.” Since then, she’s had puzzles at Inkubator and her own site, Tough as Nails. I just did Themeless 2 at Tough as Nails and … it was harder for me than all but a handful of Saturday NYTs all year. 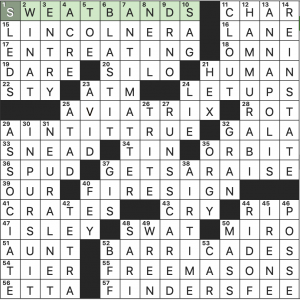 Still haven’t done a LAT Saturday in under 6 minutes in quite a while. That sound like a haughty statement, but this was not uncommon for my solving time. Maybe they took my advice and made these just a smidge harder, or maybe I am rounding OUT of form just ahead of the ACPT! I better print out a stack of these things or grab a book and get in paper solving mode quickly! Evan has a nice puzzle here, though, that is not too thorny and still a lot of fun. 4.4 stars.

Some parts I liked:

I’ll stop there! Off to see the Harlem Globetrotters this afternoon! 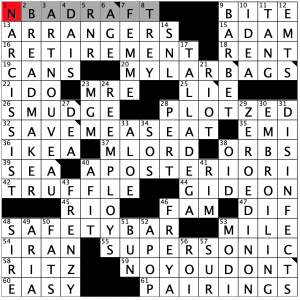 This one was a toughie! The solve was extremely slow, and I wasn’t sure I was going to finish this one. Across Lite grid image shows my mistakes. There aren’t as many as I thought there were, but there are a few. I will have to compile some sort of ranking of Stumper constructors: Sewell might be near the top! 4.5 stars for this beast.

Everyone have a wonderful weekend! 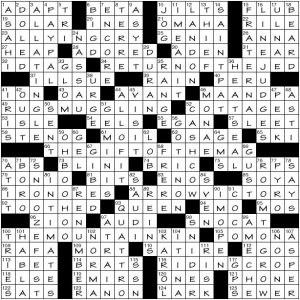 Fair enough theme. The mechanics are good, but it seems kind of arbitrary.

That’s all I’ve got. Good puzzle but still questionmarky for me.

Let’s get this party started!

THEME: Phrases where the opening letters feature a synonym for “party”

The fill and the cluing outshone the theme here. Really liked I TOLD YA, the great clue for TEXT [Helpful or distracting thing when studying], SET UP SHOP, and SAY PLEASE. Tripped a bit when I entered ACUITY instead of ACUMEN for [Keen insight] (does ACUITY work with that clue? Asking for a friend…)

The theme was… okay… but I have a problem with DOUBLE HELIX hiding “DO” as a synonym for “party.” I mean, c’mon. I googled the definition of DO, and as a noun, its second definition is British slang for a party. And no… no one says that. Ever. In addition, the revealer asks the solver to look at the first few letters. How many is a few? A few is never less than three in my opinion (even though the official definition is “more than one,” we all know it never means two).

So DO is A) Not a valid synonym for party, at least in America and B) Is not what a rational human being would consider a “few” letters long.

I’m wondering how that passed muster.

Good grid, but when 1/3 of your theme answers don’t fit the bill…