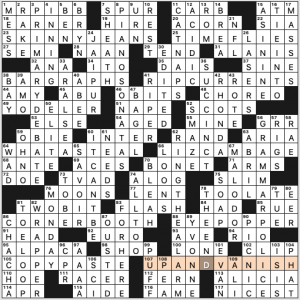 Well, I finished the puzzle and had no idea what the theme could possibly be. Aha! There’s a note with instructions: “When this puzzle is finished, change one letter in the last word in the answer to each asterisked clue to name a food. The replacement letters, in order, will spell an appropriate phrase.” Here we go:

So the meta phrase is BREAK BREAD. Apt enough.

Three quick things, because I’m on my way out the door—

Fill is solid, with bright spots like GRAMMAR POLICE, SUCCINCT, timely PRIMARY DEBATE, and “IT CAN’T BE!” 3.75 stars from me, probably not higher because the NYT’s inability to clearly signal “there’s something extra here, when 95% of the time there isn’t anything else to look for” in the .puz format is annoying. They couldn’t add “(see note)” to the puzzle’s title? 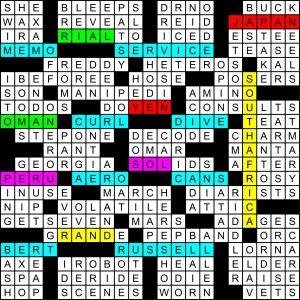 Matt here subbing in for Jim Q, who is herding reindeer in Finland this weekend (not true, as far as I know).

Evan gives us all a wage hike this weekend, assuming you’re paid in one of four national currencies. Each currency’s name is concealed within a larger phrase, and jumps up into the grid at the appropriate moment (get it? “wage hike”?) before ducking back down again. They are:

26a. [*Occasion to honor the recently deceased] = MEMO-RIAL-SERVICE, with an Omani RIAL poking its head out up top.

58a. [*Frizzy-leafed vegetable] = CURL-YEN-DIVE, with a Japanese YEN above the rest. That’s a “curly endive,” a vegetable whose existence I do not doubt despite never having knowingly come into contact with it. Kind of a trickY ENtry.

111a. [*Philosopher who received the Nobel Prize for Literature in 1950] = BERT-RAND-RUSSELL, with a South African RAND sticking out.

In addition to the asterisks on theme clues, Evan also politely gave the solver the relevant countries’ names in the grid: OMAN, JAPAN, PERU, and SOUTH AFRICA, each pointing to the relevant Wage Hike. Japan = Yen and South Africa = Rand were obvious, but I’m not sure I would’ve known that Oman = rial and Peru = sol without the hint, so smart move to include it for a 100% solver click.

39a. [Rule broken by neighbors?] = IBEFOREE. I thought Evan had lost his mind for a minute there! Some crazy letter combination action happening, then suddenly had the “aha!” and all was well — that’s “I before E.”

46a. [Job done on one’s hands and feet] = MANIPEDI. Tricky! I had the terminal I early and then thought I was looking for an Italian or maybe Japanese word, but no. Especially tricky since it crosses…

10d. [Brings home, as Twins] = DRIVES IN. You know, when I’m cluing a puzzle I always avoid clues like this where the trick is tipped off by a capitalized letter like the T in “Twins” here, which tells you you’re not dealing with just normal twins. But then when I encounter one in the wild as a solver, I’m fooled about 75% of the time (as I was here) because I just don’t notice the capitalization. If you can’t beat ’em join ’em I guess, so look for tricks similar to this in my puzzles in the near future.

4.20 stars. Above-average rendition of the theme-entries-go-somewhere-unexpected idea since “wage hike” is such a nice justification for it and the grid and clues are smarter-than-the-average-bear as well. Evan continues to make himself a worthy successor to Merl at the Washington Post!

This appears to be a debut for Val, so congratulations!

Unfortunately, it’s a circle-dependent theme- a type which Universal LOVES to run even though it cannot figure out how to employ circles in its grids, thereby confusing and turning off many novice and casual solvers who are unlikely to visit this site and download the Across Lite version (I’ve seen it).

Not at all Val’s fault for an otherwise great puzzle.

A nice set and a clean grid all around. Very smooth and enjoyable. Fave fill: BOO YA! STARSHIP, SCARE OFF, and ALL NIGHTER. LION TAMERS was good, but odd to me as a plural. Like, do they all hang out together? I thought a circus usually had only one. Haha! It’s a funny visual.

Of course, Val’s work is undercut by Universal’s unwillingness to catch up with every other major publication who is able to use circles and enhance the visual element. That’s a shame.

All the theme answers have “em” removed. Results are mixed. 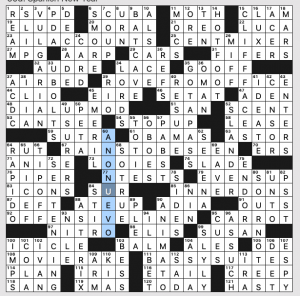 I like the theme idea. The last two entries are pretty weak.

What I didn’t know before I did this puzzle: that UNICEF won a Nobel Peace Prize and that ASTERIX was set in Gaul in 50 BC. It would be nice if the NYT acknowledged that “BC” is Christian-centric and that most of the world’s population isn’t Christian and started using BCE (before the Common Era) and CE (Common Era) instead of AD. It would be nice.