I couldn’t figure out where this was going and I was amused when I got to the revealer. Could have done without the racist entry. 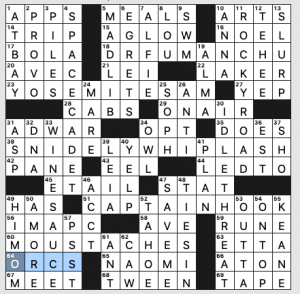 And the revealer: 60a [Archetypically villainous features possessed by the answers to the starred clues], MOUSTACHES. I had to do an image search to confirm that CAPTAIN HOOK does, indeed, have a moustache (or mustache, as I’d prefer to spell it). I don’t think of it when I see him in my mind’s eye, probably because I’m thinking of my brother playing the role at age 14…

What I didn’t know before I did this puzzle: that PROVO has over 100,000 residents, and that ORCS are [Foes of elves, in Tolkien]. Everything I know about LOTR I learned from crosswords; I have neither read the books nor seen the movies.

I thought the theme was phrases with the form {some things AND some other things}, but it’s tighter than that. The revealer at 67a revealed all with this clue [Seminal role-playing game familiarly, and the theme of this puzzle] and this answer D AND D. 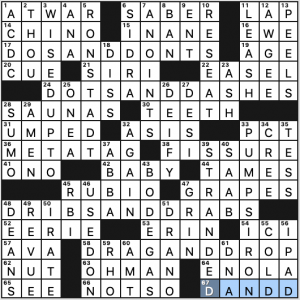 A nice, breezy Monday set. Clean and accessible. Just the way to start the week.

Loved seeing Linda RONSTADT in the fill. I had a crush on her when I was a kid after seeing her on The Muppet Show.

PUMPS IRON and BODEGAS make for more great fill, though WISED UP TO would have been better without that last word. I also liked METATAG, FISSURE, and the “OH MAN” / “AW GEE” combo.] SIDRA [Libya’s Gulf of ___] comes out of left field on a Monday, but I find it interesting. Needed every crossing though.

First of all, what are the odds that this puzzle would run with KOBE in it the same day that the NYT runs with LAKER, today of all days? I’m not a basketball fan or an Angeleno, but my heart goes out to his family and the community of people who loved him. 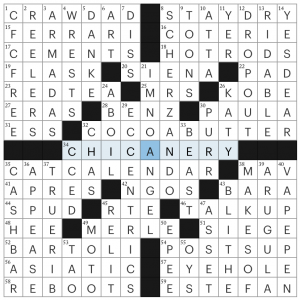 The puzzle itself: lots of good stuff in here, and some things I really struggled with. The grid is an interesting layout, with near full rotational symmetry, so all of the corners are approximately the same size. This means that there are no particularly long stacks, and the 4 longest entries are in the center of the grid (CAT CALENDAR / SCHERZANDO / COCOA BUTTER / ECCENTRICS). I lol’d at the clue on CAT CALENDAR when I finally got it (Where you might find a tuxedo), although I wish it’d had a ?. I knew the first part of SCHERZ- and then had to piece together the end from the crosses. I was curious about the clue on ECCENTRICS (Cranks) — one can certainly be eccentric without being cranky, so I had to look up both ECCENTRICS and crank to see which one had another meaning I didn’t know. It was crank! Apparently a second meaning of crank is “an eccentric person, especially one who is obsessed by a particular subject or theory.”

In terms of the solve itself, I flew through the NW Corner so fast that I didn’t even see CFC FREE until after I was done. That’s a cool entry! After that, I ground to a halt in the general south of the grid. There’s a dupe in the SE (POSTS UP / TALK UP), which ordinarily wouldn’t bother me, but their proximity made it particularly glaring. I wrapped up in the SW, where I didn’t know BARTOLI and couldn’t wrap my head around CASH BAR. They may improve your (wedding) reception, but really, wouldn’t an *open* bar be more likely to improve your reception?

Overall, I enjoyed the solve, despite a few sticky places. Plenty of stars from me. 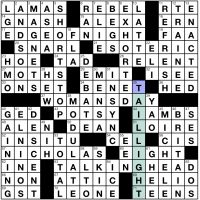 5D: SHORT STOP [Infielder typically between second and third]
17A: EDGE OF NIGHT [Mystery/soap (1956-‘84) that ultimately dropped “The” from its title]
37A: WOMANS DAY [One of the four Seven Sisters magazines that are is still in print]
63A: TALKING HEAD [Televised panelists shown from the shoulders up]
35D: TAIL LIGHT [Rear warning lamp, and what can go with the end of each answer to a starred clue]

The end of each theme entry can pair with light: stoplight, nightlight, daylight, headlight. Fair enough. I’m not as enthused about this puzzle as I have been for others recently for a few reasons. First, this isn’t a super tight theme set – there are lots of other ___light possibilities that it makes you wonder, “Why these ones?” Second / relatedly, if all you need is a themer ending with night in a puzzle you’re making in 2019 or 2020, why pick a 35+-year-old TV show whose title has to be clarified?

Aside from a few attempts at modernity in the cluing, this feels like a grid that could have been made when that show was still on the air and now just repurposed, which doesn’t spark a lot of joy. (Also, Justin Timberlake’s band is a dated reference – *NSYNC haven’t been a thing for nearly two decades.) The only hint that might be a new grid just with mostly old fill comes from ALEXA and MICHELE, which maybe could have previously been clued with older references, but it’s maybe not as likely? IDK. [Hopscotch] POTSY (??) certainly doesn’t help make this puzzle feel modern or current.

Where I do give a lot of credit is in the [Prefix with gender] clue for CIS. I’ll take inclusion of gender identities any day of the week!

After two weeks of DNFs, I managed to get through this one successfully! And had fun doing it!

Only in the SW…

I don’t understand how 62A [Where it’s at] yields LOCATED. Something seems grammatically off for me. 58D [Jerk you hate to see in public] seems a very strange way to clue TIC. I don’t think of someone’s TIC as something I “hate” to see. What I hate to see is someone making fun of a person’s TIC (like current U.S. Presidents do). Unless I’m interpreting the clue wrong. 60A [“Stay in touch!”] WRITE ME. Feels like it’s been a long time since I heard that. EMAIL ME? TEXT ME? CALL ME? Sure.

Other than those minor nits, I really liked this one a lot- and the elbow grease needed to get through a few areas was well worth it.