A quick FAQ before we get started:

Q: Who are you and why are you reviewing these puzzles?
A: I’m a librarian and I live in northern New England. I’m also the co-founder of the Inkubator. I’ve been blogging for Fiend since 2017, and when Evad stepped down from covering the WSJ Contest about a year ago, I took over. I enjoy solving and constructing metapuzzles, and I also enjoy writing about how I solve them, because I hope that in doing so I can help other people enjoy solving them more.

Q: Sometimes your posts mention getting hints from friends. Who are those people?
A: They are a group of folks whom I met on Twitter a few years ago. I now know most of them in person, and we hang out at crossword tournaments, and have become excellent real-life friends. We’ve also done a couple of puzzle hunts together, and we have an ongoing group chat where we discuss puzzles and books and other stuff that’s going on in our lives, as friends do. Some say the real meta is the friends we made along the way.

Q: Wait, isn’t that cheating?!?
A: No. Unless you’re in a tournament setting, co-solving or researching clues or working through a tricky meta with friends is not cheating. It’s learning! And, also, fun! (If you’re still concerned, note that some contest runners, like Matt Gaffney, have separate competitions for group vs solo solvers.) If you think that group-solving or hinted-solving gives me an advantage, take solace in the fact that I rarely actually submit a contest entry to the WSJ. I solve for fun and for the satisfaction of figuring something out, and, also, because I have made a commitment to write up an explanation of the puzzle every week on this site, for free, so that you can read it.

Q: I still think you and your friends are cheating.
A: That’s not a question. Enjoy this week’s post! 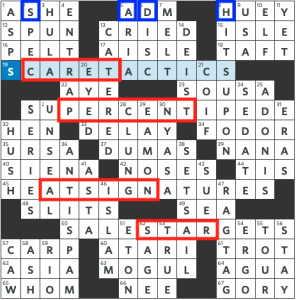 First observation: The names of four punctuation symbols are encrypted in the four themers:

Next observation: Each of those symbols sits above a number on a standard QWERTY keyboard:

Next observation: Those numbers correspond to letters in the grid, like so:

… which spells DASH, which is a a four-letter singular noun and our answer — and also another symbol on the keyboard. This measured about 1.75 Metaweeks on the Gaffney Scale; the first step was immediately apparent, the second step needed reference to something extraneous to the grid but immediately apparent to solvers using a computer and, really, to anyone who’s ever typed anything; and the third step was a very typical metapuzzle move, namely: use a new dataset (i.e. four numbers) to reference back into the grid to spell a word. All these steps are good moves to remember when you’re trying to crack a metapuzzle.

That’s all for me. I’ll see myself out to a [23a: “The Gallant Seventh” composer]: SOUSA march.