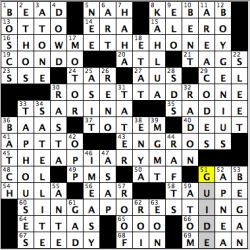 Good day, everybody! Hope all is well on this last Tuesday of January!

We know that our constructor is busy as a bee, and, for this puzzle, we have a little tribute to the industrious insect via puns. Each of the four theme entries is a retake of a phrase or a noun, in which one of the words is altered to resemble something that’s related to a bee.

In case seeing the final theme entry did not make you think about having a hard drink, there is KAHLUA that might tickle your fancy more (8D: [Coffee-flavored liqueur]). Seeing ALERO reminded me of the first car that I can remember that our family owned, an Oldsmobile Cutlass Cruiser (15A: [Bygone Olds]). I really thought we were living in the lap of luxury having a car, then I saw the cars that my friends’ parents were driving when picking them up and realized we had a real jalopy on our hands. But it was our jalopy, so we loved it! Liked the clever cluing for AREA CODES (11D: [Telephone numbers?]). Anytime OTTO can be placed in grid, which then allows me to think of my alma mater’s mascot, Otto the Orange, then I’m real happy (13A: [Director Preminger]). Very much loved BOY GENIUS in the grid as well (12D: [The young Mozart, for example]). The gift of GAB is leaving me at the moment, so time to wind down here and get ready to skedaddle (51A: [Talk and talk]). But first…

“Sports will make you smarter” moment of the day: DOWD (4D: [Columnist Maureen]) – The document that sealed the fate in Pete Rose’s eventual banishment from the game of baseball was the Dowd Report, which described the actions of Rose betting on baseball by listing bank records, telephone records, betting records (including records of Rose, then manager of the Cincinnati Reds, betting on his own team’s games) and transcripts from witnesses, including Rose. The report, conducted by John M. Dowd, a special prosecutor the commissioner of baseball, was submitted to then-commissioner Bart Giamatti’s office in May of 1989 and published one month later. Giamatti subsequently banned Rose from baseball from the game for life in a press conference that was held on Aug. 25, 1989. 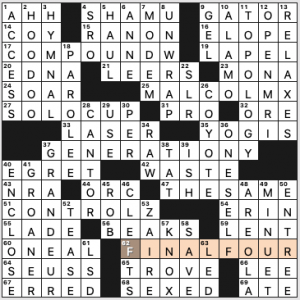 I’m surprised this puzzle wasn’t held until spring, when the FINAL FOUR happens, even though it lacks a basketball tie-in. It would have been neat to run the puzzle in late March, right before the Final Four portion of the NCAA tournament.

Anyway, that theme revealer is clued 62a. [March Madness quartet … or, collectively, the second parts of 17-, 25-, 37- and 51-Across?]. Those other four themers end with free-standing W, X, Y, and Z, the final four letters of the alphabet. 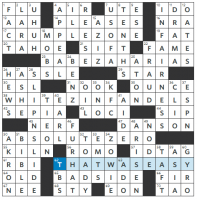 17A: CRUMPLE ZONE [Car feature for absorbing the energy of a crash]
23A: BABE ZAHARIAS [AP’s “Woman Athlete of the 20th Century”]
38A: WHITE ZINFANDELS [Wines whose color is atypical for their grapes]
50A: ABSOLUTE ZERO [Temperature at which you can’t get any more chill?]
62A: THAT WAS EASY [Confident post-exam assertion, and a hint to a letter pair in each starred answer]

Each of the fun, vibrant themers has EZ spanning its two words. I really liked this puzzle and even got to say the revealer in response to completing the grid! “Smooth Sailing” indeed. : )

The fill was clean and I even got to learn about BABE ZAHARIAS, who I’d never heard of before. “Mildred Ella “Babe” Didrikson Zaharias (/zəˈhɑːriəs/; June 26, 1911 – September 27, 1956) was an American athlete who excelled in golf, basketball, baseball and track and field. She won two gold medals in track and field at the 1932 Summer Olympics, before turning to professional golf and winning 10 LPGA major championships. She is widely regarded as one of the greatest athletes of all time.” Wow!

Other random thoughts:
– I appreciated that the puzzle today featured other great women, too: LARA Croft, REESE Witherspoon, Joyce Carol OATES, Yoko ONO, and Samantha Bee.
– I really appreciated that FAT wasn’t clue with respect to a person’s body.
– I wasn’t super keen on seeing NRA or the clue implying that it’s an organization for animal hunters, but I’m guessing that wasn’t the constructor’s doing. 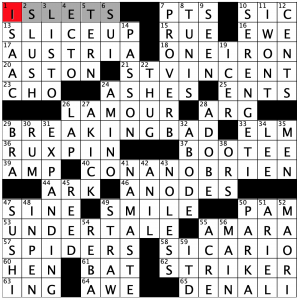 Some fun facts here. I remember most of this stuff; others not so much (53A!). But that is the hallmark of the Jonesin’ puzzle: you are going to learn some pop culture! These decade-in-review puzzles are fun. Looking forward to the final two. 4.4 stars for this one. 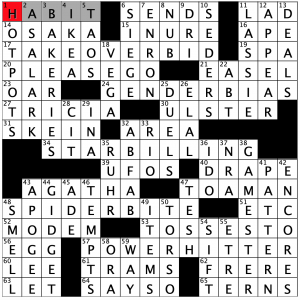 Gail & Bruce are back at it this Tuesday for a theme that I actually had figured out before I got to the end, and then the revealer still created a nice “a-ha!” moment. Here are the theme answers:

Nicely done! As mentioned above, the similarities are evident when you take a look: each theme answer has the letters RBI hidden in there. It was then just a matter of how to tie it all together, and this was done well. Great puzzle, you two! Hope to see you both in Stamford in a couple of months! 4.5 stars.

I’ll stop there! Everyone have a great week!

It’s getting to the point that I’m surprised when Paul Coulter’s name isn’t in the byline!

But hey… keep em coming, Paul. The name is also synonymous with “quality.”

THEME: Notes in the Solfege scale are replaced in common phrases/names with the note a step up from it.

Loved this one in general (despite my nit with the last entry and having no clue who LALO Schifrin is). Very clever all around, and fun fill to boot. The ridiculousness of an entry like MIC ORDER earns a fun eye-roll from me, but SIR FAX-A-LOT is the clear winner.

Thanks as usual, Paul!