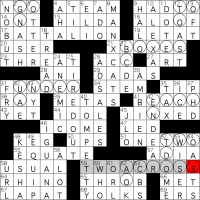 hello and welcome to episode #608 of matt gaffney’s weekly crossword contest, “Illegal Activity”. for this week 4 puzzle, matt challenges us to name a seven-letter phrase. okay. what are the theme answers? nothing is indicated as such in the grid, but one of the clues certainly stands out: {2015 Jeff Bartsch novel about a crossword-loving couple (whose title entry is illegal in American crosswords)} TWO ACROSS. this is because according to the standard rules of american crosswords, 1-across has to be at least three letters, so squares 2 and 3 have to be part of 1-across rather than starting their own across entries.

is there anything else “illegal”? most certainly. a key word from TWO ACROSS is duped in the entry {Ring combination} ONE-TWO. i thought this had to be significant, too. but i couldn’t figure out a way to get to a seven-letter phrase based on these rule violations (especially since the one involving black square placement doesn’t really suggest any particular letters).

the next thing i tried was looking at the actual entry at “2-across”, which would be the GO of {WWF, e.g.} NGO. that might be the start of a message. i tried reading several other across entries dropping their first letter in a similar way, and found several intriguing ones:

now it really does look like we’re spelling out a message including the words GO BOXES UNDER EACH. but just as clearly, we’re missing some words in the message (likely three of them, based on the instructions), and nothing else was jumping out at me, and i didn’t understand yet what the TWO dupe or the asymmetric black square placement had to do with anything, so i had to set the puzzle down for a bit.

the full message is GO TO BOXES UNDER EACH TWO ACROSS (circled in the screenshot above). and indeed, taking the squares right below the starts of each of those words (also circled) spells out NO CAN DO, a seven-letter phrase that must be the meta answer. and a fitting one, at that, given that the mechanism relies on conspicuous rule-breaking.

let’s examine that rule-breaking a little closer, shall we? duping the TWO was necessary because we needed to get TWO in the message at 52-across but also have TWO ACROSS itself be a theme answer (indeed, the only evident theme answer). but what about the asymmetry? here it was necessary so that (B)EACH would be at 42-across instead of 41. was there any way to restructure the grid so that an asymmetry would not be necessary? that’s impossible for me to answer. i don’t know how difficult it is to put theme answers at particular grid numbers because i’ve never tried to do it, but it does seem awfully constraining. so you can chalk this one up as a minor inelegance, and certainly a distracting one since it didn’t really help you solve the meta even though it arose due a constraint imposed by the meta.

aside from that, i thought this meta was quite challenging and very good. definitely a week 4 puzzle—and i’m girding my loins for week 5!

that’s all i’ve got this week. i’ll leave you with my favorite crossword that does have a 2-across, the thursday, february 2, 1995 NYT by bob and sharon klahn.