Our theme is well-known phrases whose last word can be a synonym for “finalized” and whose first word is changed to a noun. 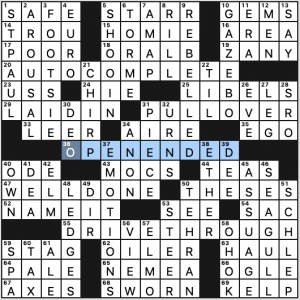 This didn’t do much for me. The lack of articles and verbs just makes everything sound awkward and unnatural. 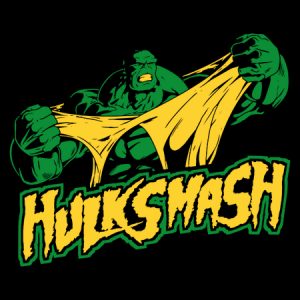 And then I started hearing the theme answers as if they were spoken by the Hulk (“Hulk smash!”), and that helped a lot. I would have loved it if the clues all had the Hulk in them, e.g. [“You can pump your water now,” to the Hulk]. This line of thought then put me in mind of the old SNL sketches featuring Lovitz, Nealon, and Hartman, as Tonto, Tarzan, and Frankenstein’s monster respectively speaking and singing in broken English. Here’s their rendition of “We Are World” (can’t embed the video, else I would).

Top fill: “NAME IT!”, GAZEBO, FOOTSIE (next to AROUSAL), SHOO IN, TEHRAN, SEAGULL, and SCHELP. Bottom fill: Archaic HIE and weird LAID IN [Stored away] and DEE clued as a Scottish river. (Note that there are actually four Rivers DEE in Britain.)

On their own, the awkward-sounding theme answers didn’t thrill me. I needed to employ my imagination to make them more fun. YMMV, of course. 3.3 stars. 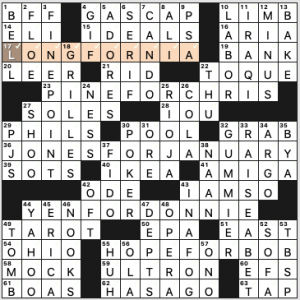 Our theme features actors whose surnames are synonyms for “want,” with their surnames flipped into verbs:

Great theme! I appreciate that the theme’s only 40% white men.

I don’t think this puzzle was as hard as my comparative (Thursday/Saturday-tough) solving time suggests. How’d you wrangle the puzzle? 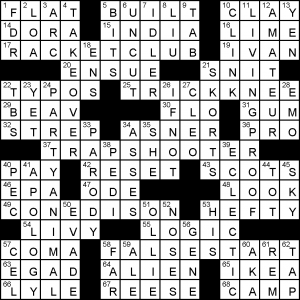 I know a FALSESTART as an athletics infraction, but OK [Gridiron…] works too. It’s a slightly loose, but interesting, synonym theme with various falsities at the beginnings of words: a RACKET, a TRICK, a TRAP and a CON. Parsed the last answer as CONE/DISON first; we only have one power company for the whole country so a city-specific firm is a curiosity. I found myself realising I wasn’t sure what a TRICKKNEE was, but guessed luxating patella, as those slip in and out on a whim. Sure enough… 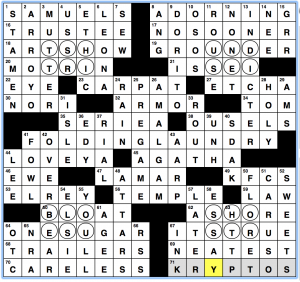 This week’s AVCX is from BEQ, and it’s a 3/5 on the difficulty scale.  I’d say that’s about right.  Since this is more of a visual theme rather than something in the clues, let’s talk about that and then run through the fill like it’s a themeless.

The hint for the circled squares in this puzzle is a “household chore” that turns out to be FOLDING LAUNDRY.  Folding laundry tends to take me forever, but spotting what was going on with this was pretty instantaneous – each set of circles contains a folded article of clothing – TSHIRT in the upper left, UNDIES in the upper right, BLOUSE in the lower left, and SHORTS in the lower right.  It’s a cute theme.

Looking at the fill:

It’s late, so I’ll leave it there.  Hope you enjoyed this week’s AVCX!