This week’s Fireball is a contest puzzle. We will publish a review after the deadline. 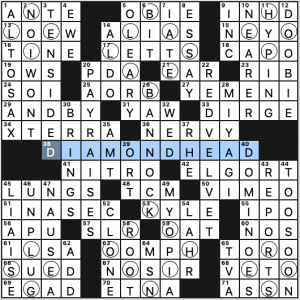 Despite that last one, I like the theme, although I feel like I’ve seen something similar recently, within the last year or so. Can’t seem to find it… Oh wait! Here it is: a Nov 7, 2019, NYT puzzle by Joe DiPietro. No wonder it was familiar, I blogged it that day.

Moving on to the solve in general, I feel like I struggled quite a bit here, getting bogged down by trivia and ambiguous clues at times. It threatened to turn into a slog, but I was always able to find something to give me little toeholds here and there to get me to the end.

The long fill is quite nice with ALTO SAX, “NO I WON’T!,” TEN-SIDED (referring to a decagon), PAY RAISES, DOOBIE, X-TERRA, BANNOCK (Scottish flatbread which I must have picked up somewhere), DOMINOES, “TOO SOON?,” and RED VELVET.

Not so keen on these: Proper name crossing of LETTS and O’LEARY (also LETTS and ALDO), name-I’ve-seen-before-but-will-quickly-forget-again Ansel ELGORT, OWS stacked on SOI stacked on weird partial AND BY, and lastly ORT, AORB, and RHE (Runs/Hits/Errors).

Let’s do the men vs. women test because it feels pretty off-balance today. For the guys: Marcus LOEW, Sundance Kid in a clue, NE-YO, playwright Tracy LETTS, CAPO the crime boss, [Mocha man] the YEMENI, Ansel ELGORT, Ben Mankiewicz (who?) in a clue, Cubbie KYLE Hendricks, TV’s APU, Casablanca‘s Rick in a clue, ALTO SAX player Johnny Hodges, TV’s Kevin O’LEARY, ALDO Gucci, fictional Mr. MIYAGI, Jean-Paul Sartre in a clue, and finally Burt LAHR (along with Bolger and Haley in the clue). For the women: ILSA clued with respect to Rick, one EWE, and Judy Garland in the LAHR clue. Wow, that’s really bad: 17 to 3. A little more balance would be appreciated. If you don’t have it in the fill, make some effort in the clues to be more inclusive.

Bottom line: Strong theme and good long fill countered by some stale short fill, a lot of trivia in the clues, and a male-centric approach. 3.5 stars. 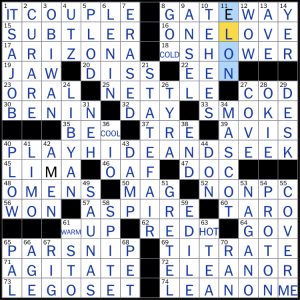 This Thursday’s NYT attempts to PLAY HIDE AND SEEK (40A, “Participate in a common children’s game, as illustrated in this puzzle”).  We’ve got IT and ME in the upper left and lower right corners:

and a trail throughout the puzzle as IT gets closer to ME:

It’s cute, even if it’s not really the way I think of hide and seek working – if you’ve hidden an item for someone to find, you can guide them that way, but if everyone’s hiding, who’s saying when they’re warm or not? 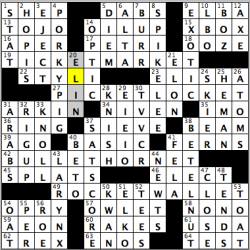 Good morning, everyone! Apologies for being unaccounted for in this space last week, so definitely want to make up for some lost time.

Today’s puzzle could have also been interpreted as an alien invasion to go along with the actual play-on-words in the title. The puns created in each of the four answers are formed when adding the letters “ET” to the end of both of the words of the original phrase.

Pretty fun solve, especially since a couple of entries hit on a couple of topics close to my heart: Nigerian music, with FELA (41D: [Bandleader Kuti]) and Looney Tunes, with the entry of PORKY PIG (4D: [Toon with a stutter]). Like to get to know something new, and that was the case with BETEL NUT (38D: [Fruit of an Asiatic palm tree]). I am familiar with the Apple Stylus, so putting in STYLI didn’t throw me off too much, even though I don’t think I’ve ever seen the plural form of the word before today’s solve (22A: [Apple Pencils, e.g.]). Though I reside in the middle of KNISH central, I have never actively gone out to buy one for myself and usually come across them when co-workers bring extras and I’m in the right place at the right time to pluck one (28D: [Stuffed turnover]). Besides, I’m more of a beignet type of person with my fried dough preference!

“Sports will make you smarter” moment of the day: BOZ (11D: [Guitarist Skaggs]) – One of the great defensive players in the history of college football — and one of the biggest hypes/busts in the National Football League — was former University of Oklahoma linebacker Brian Bosworth, nicknamed The Boz. Bosworth was a tackling machine while playing linebacker for the Sooners, helping lead the school to a National Championship in the 1985 season. In part to market himself more, Bosworth created a larger-than-life, bandanna-wearing, mohawk-sporting persona called “The Boz,” which turned him into a polarizing figure nationally. Bosworth was drafted by the Seattle Seahawks in 1987, but injuries — and an embarrassing moment at the goal-line at the hands of L.A. Raiders running back Bo Jackson on Monday Night Football — ended his pro career after just three seasons.

Thank you so much for your time, friends! Have a great rest of your Thursday, and hope you have a good weekend coming up!

Another puzzle marred for the novice/beginner because Universal cannot employ circles in its grids. For the life of me, I cannot understand the rationale behind the refusal to update the technology in the applet and in print editions to include the very basic concept of circling letters in the grid (Universal very frequently runs puzzles that would be better served with circles).

Ironically, Andrews McMeel’s website claims that it “…sets the standard for all daily crosswords.” If that’s true, then why are all other major publications willing to include circles in their puzzles? If omitting them is the “standard” then shouldn’t they all follow suit?

THEME: International versions of “Goodbye!” are hidden in theme answers.

Not the grandest tour in the world, going from Spain to Italy to England, but it works!

Evan is publishing a heck of a lot of puzzles lately, and I’ve gotten to know his work quite well. He is painstakingly meticulous when filling and always makes sure his concepts/executions are clear and consistent. While this may not be his most clever theme, it certainly fits that bill.

My most amusing error was filling in TORTE instead of FORTE for [Strong suit]. I mean, it sounds correct, right? A TORT could be a strong lawsuit. But I doubt a TORTE can do anything other than taste delicious. 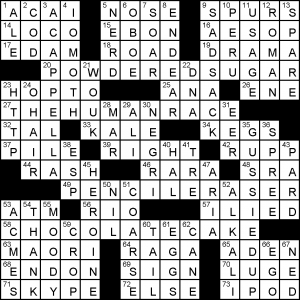 This is one of the best realised LA Times themes I have solved in a while. The clues are all spoken phrases beginning with “That’s…” and the rest as used as a clue for some unexpected answers. POWDEREDSUGAR is […fine]; THEHUMANRACE is […all folks]; a PENCILERASER is […not the point]; and […rich] is CHOCOLATECAKE. My favourites were the middle two which require more intricate wordplay to work.

Is it a rule that ACAI clues have to echo their sellers’ hype? Also note: new ANA found in the clue [“Knives Out” Golden Globe nominee de Armas]. Curious how many people still use an [MP3 player], IPOD and not just their phone.