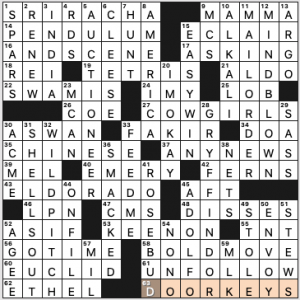 Editors, you gotta read further down in Wikipedia articles or else you look foolish. 26a. [George ___, original cast member of “S.N.L.”], COE, for real? I’ve watched the show off and on since I was a kid in that first season, and this name wasn’t at all familiar to me. Wiki says: “He was only credited as a cast member for the first show, October 11, 1975. Coe was used in several other episodes of SNL, but was never again credited.” You cannot clue a not-famous person by, basically, a single TV episode from 45 years ago. It’s ridiculous.

Speaking of silly things in the puzzle that irritated me: DOOR KEYS. You mean … keys? That’s what we call ’em, generally. Dictionaries know what I’m talking about.

I do like GRYFFINDOR, WILD PITCH, SHELLS OUT, “MIND BLOWN,” SRIRACHA, BOLD MOVE, and “ANY NEWS?” My mind was blown today by learning that some (most?) people actually “hear” their own voice in their head in their internal monologue, their thoughts. I think things all day long, but not in my voice. Others had their minds blown by discovering that some people are like me and don’t hear that voice. Here’s the blog post that flipped my skull open.

Favorite clue: 35a. [Inventors of the compass and movable type], CHINESE. THE CHINESE might flow better, but hey, it’s still cool info.

What a beauty! I’m reviewing this puzzle from an airport between flights, so I don’t have a ton of time to devote to listing all of the things I love about this clean, gorgeous, chock-full-o-goodness puzzle, so I’ll stick to the top highlights. 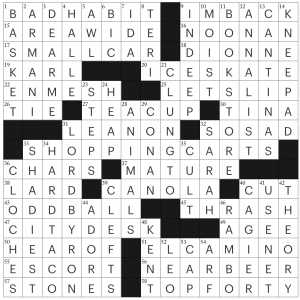 The main highlight: those corners! The wide open NE and SW, and only slightly smaller NW and SE corners, are just fabulous. I won’t list out the stacks, but some of my favorite entries in the corners are: NEAR BEER, LORD BYRON, SHADIEST, CLOCHES, DIONNE (Warwick), EL CAMINO. So good!!

Other highlights: can fill be a highlight? There is literally no bad fill in this puzzle. Just *chef’s kiss*.

This puzzle feels qualitatively different from most other New Yorker puzzles in that it elevates the fill and cluing rather than currency, trivia, and freshness, which is fine by me! I like that the New Yorker mixes things up a bit and keeps their solvers on their toes. This was also easily my fastest New Yorker solve on record, fwiw.

All the stars from me! 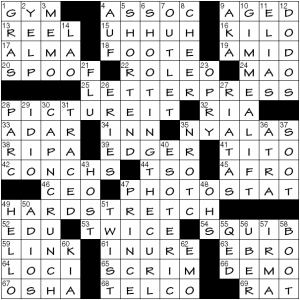 Revealer right off the bat in this one.

Quibble for 25-across, which I’ve rendered properly as a compound word despite the directive of the revealer (“last words …”).

I was confused about this theme until I filled in about a third of the puzzle. It was a satisfying “aha” moment, and the revealer made me grin.

Each theme answer is missing something. 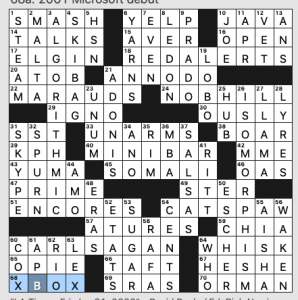 The revealer is in the middle: 40a [Hotel room amenity … or one of the configurations that resolve four puzzle answers], MINI–BAR.

What I didn’t know before I did this puzzle: that the XBOX was introduced in 2001 and that the OAS was founded in 1948.

I’m delighted to see Janie’s byline back! Janie is an erstwhile member of Team Fiend, a stalwart judge and volunteer at ACPT and Lolla and an all-round great person who I am proud to count as a friend. Today’s Inkubator is all about the ladies. Literally.

And the revealer: 60a [1938 Hitchcock thriller, and a hint to this puzzle’s theme]” THE LADY VANISHES. Add “lady” to each theme answer and they make more sense: LADY MACBETH STRATEGY, LADY IN THE DARK, LADY SINGS THE BLUES, and LADY MARMALADE. I was not familiar with the first one. Google tells me that it’s “a merger strategy in which a company betrays a target company by first appearing as a friendly alternative to an unfriendly acquirer and then later joining forces with the unfriendly acquirer.” OK, then. I am familiar with LADY IN THE DARK, a 1940s musical about psychoanalysis with music by Kurt Weill and book and lyrics by Ira Gershwin. It’s the sort of entry I expect from theater aficionado Janie! All in all a challenging, interesting, and solidly constructed theme.

What I didn’t know before I did this puzzle: see above re LADY MACBETH STRATEGY.