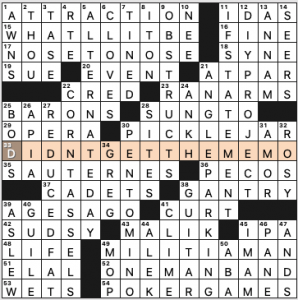 It’s late, I gotta get this post up, and I’m trying to finish the NYT Spelling Bee puzzle before bed. So:

Unfortunate duplication: MILITIAMAN atop ONE-MAN BAND, too many men.

Worst crossing: 11a. [One of the Argonauts in Greek myth], IDAS meets 13d. [Former kingdom of central Vietnam], ANNAM. Crosswordese collision! Not pretty. 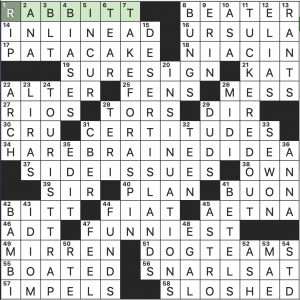 I am trying to get some speed back, since the ACPT is now less than 2 months away. I suppose I should buy my plane tickets! Got this one done pretty quickly, and I think it would have been quicker had I not made a slight error.

I will stop there. Another LAT puzzle post from me on Tuesday. 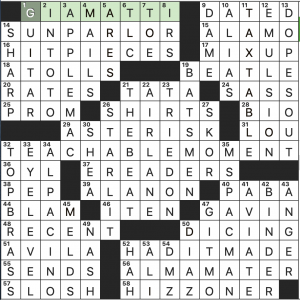 This puzzle has some awesome wide-open areas, but it wasn’t a total killer. There were some great “a-ha!” moments, some new facts and/or words to learn, and some fun breakthrough points. All in all, a great puzzle, Stan! A solid 4.6 stars from me.

Some of those highlights:

That is all! Have a great weekend!

A-huntin’ we shall go!

THEME: Animals who are at the top of the food chain can be discovered at the tops of each theme answer.

Solid all around. I really like how A) The animals are hidden within the first words/names and B) Two of them (BEAR and LION) you can’t even hear them hiding in there.

Fun fill with the likes of CHA CHING! IRON GRIP, SNEAK IN, MACAROON, and of course BEER PONG. I asked my mythology class of senior high school students to develop a game that reflected a myth as a culminating project. Sure enough, some students found a way to rebrand BEER PONG into an educational experience (and it worked! no… there was no drinking of anything involved).

New for me was TIN GODS. I like that term. 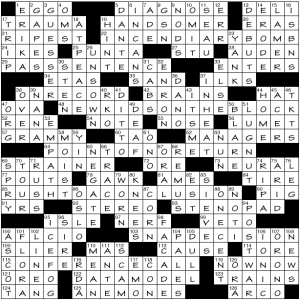 I understand there’s a big football game coming up soon. Let’s kick things off, shall we?

These are all quite cleverly repurposed.