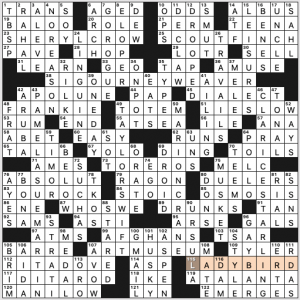 The title smacks of birds, and indeed, the theme revealer is 115a. [2017 film nominated for Best Picture … or a hint to the answers to the eight starred clues], LADY BIRD. The other eight themers in this L/R symmetry grid are famous women (or girls), real or fictional, whose last names are also birds:

I like that the theme is all female. I also enjoyed the way the puzzle just flew, with no trouble spots slowing me down. Probably my fastest Sunday time in a year or three.

At least I don’t have to do arithmetic to get the Roman numeral answers in this puzzle. All the themers have Roman numerals standing in for numbers in titles or phrases. One of the things I dislike about Roman numerals in crosswords is that they are usually numbers in one direction and letters in the other direction, as they are here.

So the theme answers: 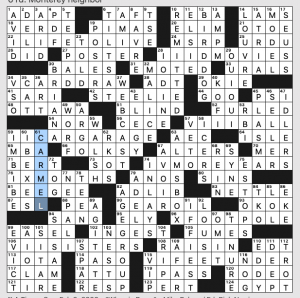 There’s nothing wrong with this theme, and nothing particularly enjoyable about it, either. I can’t say the same for the fill (well, I can say it wasn’t enjoyable, I guess). PSA: NORW is not an abbreviation for Norway. It’s just not. I’m too tired to list the rest of what’s wrong with the fill. It’s just not a good puzzle.

What I didn’t know before I did this puzzle: that AIOLI derives from Provençal words for “garlic” and “oil.”

THEME: ????? The Notepad tells us that the answer to the meta-puzzle is a football-related term. That seems apropos!

So what’s going on here? While I was solving, I thought perhaps the meta-answer had something to do with repetition since the first theme answer I uncovered was BUZZ BUZZ BUZZ followed by HEY DIDDLE DIDDLE shortly thereafter. VOODOO kind of has a repetitious sound too. But that theory was quickly scrapped when the others surfaced.

But don’t those Z’s really jump out in BUZZ BUZZ BUZZ? And that’s a lot of D’s in HEY DIDDLE DIDDLE. Aha! There’s exactly six! That with the title is all you need to find ENDZONE as the answer to the meta. Just look for the letter that appears six times in each themer:

I think that’s it… but I can’t help but think that I’m missing another layer. Am I? I mean the puzzle is fine left there, but often Evan has layer upon layer of theme in a meta-puzzle (or a “regular” themed puzzle for that matter). I can’t imagine there’s much more wiggle room for thematic material with all of those long answers and the smooth fill. And the title, “Pick Six,” sounds more like a lotto-related term (even though a touchdown is six points)… I dunno. I’m going to stop thinking about it now.

So… ENDZONE it is!

Enjoy the game tonight… here’s to hoping the score favors the boxes in your office pool!

Great byline today! Who isn’t excited to C.C. named as the constructor?

ARTICLE, PICTURE, COLUMN, and LETTER. Yup! All staples of any newspaper.

Simple, clean concept in a simple, clean grid. Totally what one would expect from a Burnikel puzzle.

I don’t have a helluva lot to say about it other than I enjoyed it, and I liked the fact that it made SELF SERVE ice cream sound like a healthy alternative to Ben & Jerry’s [Kind of ice cream that generally has less milk fat].

Stumbling spots were ROCHE and CARLA. Also, the word SWOLE really bothers me for some reason. I cringe when people say it unironically.