Happy Superb Owl Sunday! In my house, 75% of the human residents have some kind of mild flu, so no party for us, and short post for you.

Alex asks: What two-word movie from the 1980s is hinted at by this puzzle? 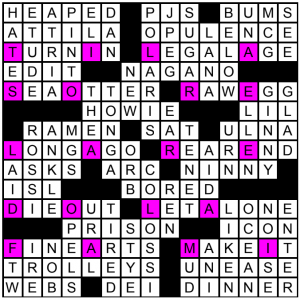 The grid was a pretty smooth solve, with no stand-out themers. At first I thought the meta answer might be LA STORY (that’s sort of a two-word movie? if an abbreviation is a word?) since we had the entries LEGAL AGE, LONG AGO, and LET ALONE — the initials of those two-word phrases are L.A. and LA is a note, right?  (See how much I know about music …) But no, you’re not taking it far enough, I was told by my solving partner. Why not look for other “notes” in the grid? Turns out, every two-word entry corresponds to a note:

If you take the first letters of those phrases, you get: ti, la, so, re, la, re, do, la, fa, mi — which I recognize as notes because I’ve seen The Sound of Music several hundred thousand times. But as that describes the limits of my musical knowledge (don’t get me wrong — I love listening to music, but I have little sense of how it’s made), my solving partner kindly suggested that I do a little research to find out if those notes correspond to some letters on what I’m told is a scale. I was glad to discover that they do, on a thing called the C-major scale, one of the most common in Western music. Good to know! Apparently do = C, re = D, and so on, in something called the fixed-do solfège.

If we take the notes suggested from the two-word entries in the grid, and line them up with their corresponding, uh, notes (aren’t they both notes? Fraulein Maria, I blame you for my lack of musical education), you get:

BAGDAD CAFE was a 1987 film by German filmmaker Percy Adlon, about a friendship between women at a diner in Bagdad, California (a town on Route 66, nearly abandoned after Interstate 40 bypassed it). I remember seeing it maybe in college? I worked at an art-house cinema as a teen (I also wore lots of black thrift store clothes and Doc Martens, which should surprise no one who knows me now) and maybe they showed it? It also was remade as a short-lived TV series in the 1990s, starring Whoopi Goldberg and Jean Stapleton. It’s a great find of a title that can be made just of notes in the [proudly showing off new knowledge] the fixed-do solfège. Anyway, cool trick, and I was glad to learn something from this one.

Here’s the original trailer for this noteworthy film: