This week we’re looking for a popular appetizer. As an appetizer to this post, I’ll just warn you that it’ll be a short one, since I’m fighting off the flu (yes, I got this year’s shot) and my kids are yelling from the next room about the Puppy Bowl. 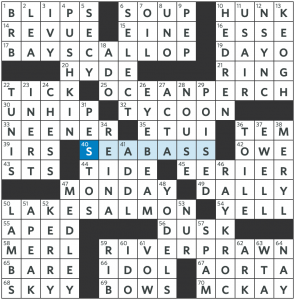 Something seems fishy about these themers:

My first assumption was that the enumerations  suggested either 1) two-word phrases that corresponded to the bodies of water in the themers (Q: Is there an OCEAN that’s 2 and 5 words? A: Nope); or 2) letter placement in some other corresponding answer/entry. And what does the title mean? I tried backsolving a bit from some popular seafood appetizers — ceviche, calimari, shrimp cocktail, raw oysters — but only succeeded in increasing my appetite.

Not finding myself getting anywhere, and feeling feverish, I put it away until the following afternoon, when Matt Gaffney’s Weekly Crossword Contest appeared in my in-box. What we all expected to be a difficult Week 5 turned out to be a relatively straightforward Week 2-ish (you’ll have to wait for Joon’s review on Tuesday), about which Matt has this to say: “If you want a tougher challenge, my WSJ meta today should do the trick.” You’re telling me!

At this point, Jesse* and I decided to set sail together, and after avoiding a few shoals and sea monsters, managed a successful crossing (okay, enough with the nautical puns!). I couldn’t stop seeing ERIE, which, if you solve many crosswords, you know as a popular lake, encrypted in [45a: Like “Jaws,” compared to “Juno”]: EERIER, and we thought maybe “Parting the Waters” meant that names of bodies of water were split somehow in the grid — which, turns out — they were:

Then take the parenthetical enumerations from the themer clues to index the resulting names of bodies of water:

… spelling out SPRING ROLL, which is indeed a popular appetizer, and our answer. This was tough but rewarding!

I do love songs about the sea and sailing and shipwrecks, so in a way this puzzle was right in my wheelhouse. Here is Canadian post-punk band Headstones covering “The Wreck of the Edmund Fitzgerald” while standing out on what I am assuming is the frozen surface of Lake Superior, which is very metal. Fellas, it’s been good to know you.

*… whom everyone should congratulate for placing Third at the Westport Library Crossword Tournament yesterday!