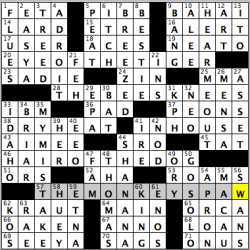 Hello there, everybody! Ade stepping into this space for the day, and hope you all are ready for the start of another week!

Today’s grid, brought to us by Mr. Michael Schlossberg, deals with animal anatomy…while not dealing with animal anatomy at the same time! Each of the theme answers is a title or a phrase that ends up containing both the name of an animal and a body part in it.

Happy to have BREEZED through this grid with no hiccups to report (7D: [Glided effortlessly (through)]). A couple of Asia-related entries could have caused some slippage in the solving, whether putting in “Islam” instead of BAHA’I (9A: [World faith founded in Persia]) and/or putting in the alternate spelling of MACAU, Macao (55D: [Chinese region dubbed the “Vegas of Asia.”]). Loved the fresh fill of both BESTIE (8D: [Favoritest friend]) and HEAR ME OUT (11D: [“I know you think this is a ludicrous idea, but…”]). Probably favorite fill of the day was actually IN-HOUSE (41A: [Not outsourced]). A number of three-letter crosswordese might have been a eyesore, especially with FEH featured, but who am I to get upset at some Yiddish being mentioned in the grid (21D: [“Bah!”]). Kansas City has just won the Super Bowl, 50 years after appearing in and winning the Big Game last. In honor of the win, let’s talk about one of the greatest players to ever play for the franchise, one who was a big part of the 1969-70 championship team that won the last game played before the AFL-NFL merger.

“Sports will make you smarter” moment of the day: THOMAS (48D: [Supreme Court justice Clarence]) – Former Kansas City pro football player Emmitt Thomas was one of the great defensive backs in pro football during his playing days in the late 1960s and 1970s. Like many of the stars that the upstart American Football League brought in during the 1960s, Thomas played at an HBCU, the now defunct Bishop College in Marshall, Tex. Thomas was a five-time Pro Bowler and, in Kansas City’s Super Bowl-winning season of 1969, he led all of pro football in interceptions with nine. Thomas became a longtime coach and coordinator in football after his playing days were over and, eventually, was inducted into the Pro Football Hall of Fame in 2008.

Thank you so much for your time once again, and have a great rest of your Monday!

It looks like we have two WSJ debuts today, so congratulations are in order. Mr. Aaronson had his NYT debut just about a month ago with a nice Saturday grid.

The clue [Range master] takes on different meanings in each of our theme answers today. 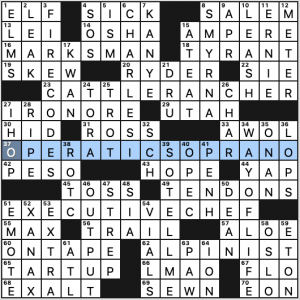 A nice set, although OPERATIC SOPRANO feels a little bit on the edge of in-the-language phrases. Still, for the purposes of the puzzle, and since it’s a nice grid-spanner, I don’t really have a problem with it. Does a soprano have a greater range than any of the other voice types?

Top fill: “SO TELL ME…,” WAY OF LIFE, FIRE CODES, LMAO, TYRANT, and CHARLES I [King during the English Civil War]. I guessed CHARLES V, but silly me, there have only been two Kings Charles of England…so far. If you were hoping for a quick English Civil War recap in a West Side Story-style dance off, you’re in luck. See the Horrible Histories video below (note: the audio sync is a little off).

I’d never heard of SMYRNA [Georgia city named after a Greek city of Anatolia] (either one), but everything else was Monday smooth.

One clue of note:

And that’s all I’ve got. A nice, accessible Monday grid with just a touch of good wordplay. 3.75 stars.

Interesting grid design! The line of black squares down the middle means we have essentially two puzzles, which only connect in two squares. Fortunately, those squares are both quite gettable, belonging to long downs WANDA SYKES and ULTIMATUMS. The other long downs are RACHEL CUSK, who I did not know, and PICKUP LINE, which I wrote in cold with no other squares in the NE, and which felt like a missed opportunity to clue with a really *wild* PICKUP LINE. 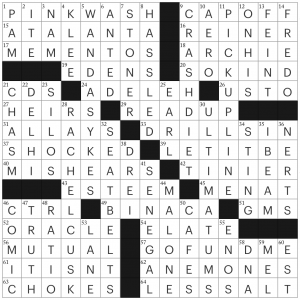 I enjoyed the solve on this puzzle, although I think the overall excitement level of some of these entries is a bit on the low end (relative to other recent New Yorkers; relative to other puzzles, this still packs a punch!). This puzzle’s real shine is in the cluing, which is full of that trademark New Yorker cultural trivia. Some examples: 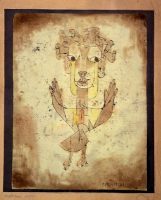 Overall, this was a fun solve and I learned a bunch, which is always worth at least one bonus star. Several stars from me! 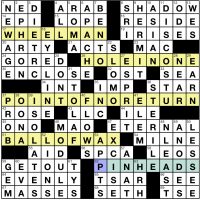 The first part of each themer can be followed by pin: pinwheel, pinhole, pinpoint, and pinball. Not bad for a Monday puzzle, except that it feels like this exact puzzle could have been published a decade ago or more with only a few slight clue changes. That bums me out because I want to bring in and engage new generations of solvers, and part of that requires puzzles whose language is current and references are more modern. It also bums me out that one of the few women in the grid (Yoko ONO) is only clued as the love interest of a man, even though she’s significantly accomplished in her own right. This isn’t saying that the puzzle wasn’t a nice solve on a Monday – just that I felt like I’d time warped to the early 2000s to solve it.