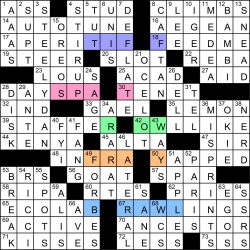 Good day, everybody! Groundhog Day has come and gone, but we don’t need to spot any marmot to know that we all will be doing crosswords on a daily basis for the next six weeks, no matter the weather “prediction!”

Since this is also the month Valentine’s Day falls in, today’s grid is an appropriate one. Two separate entries that occupy the same line feature circles and, when put together, form a word that also can be used to describe a fight. However, there’s a BREAK in those words, so no dukes will need to be put up after all (53D: [___ up a fight…and what this puzzle will do in five places]).

I know that artists like Cher and T-Pain are well known for the use of AUTO-TUNE, but I always identify the technique mostly with the innovators of Autotune, Zapp & Roger (14A: [Pitch corrector for a “pitchy” singer]). Almost certain most of you know the song that they’re most famous for, More Bounce to the Ounce.” Also, Roger Troutman (the “Roger” in Zapp & Roger) does not get enough love for being such a pioneer in what the future of music would sound like! Period!

If you’re in a different mood with your music, there are a couple of LOUS to choose from who had a major impact in the industry (23A: [Reed and Rawls]). Grid was a fun solve, and extra points for the African acknowledgement with KENYA (44A: [Nairobi’s land]). Definitely wouldn’t mind yelling FEED ME if anyone around me had some OREOS to spare (15D: [“Double Stuf” cookies]). Anytime I hear the word superintendent, or see SUPT., I always think of Superintendent Chalmers from The Simpsons (2D: [School district VIP]). Alright, time to skedaddle, but first…

“Sports will make you smarter” moment of the day: BAMBI (12D: [Thumper’s “deer” friend]) – One of the greatest football players of all time also had one of the most memorable nicknames as well! Hall of Fame wide receiver Lance Alworth played 11 pro seasons — his first nine with the San Diego Chargers in the American Football League (1962-70) — and became, arguably, the league’s biggest star who did not play quarterback. Alworth’s slender build, leaping ability and running style earned him the now-famous nickname of “Bambi.” A seven-time AFL All-Star and the 1963 AFL MVP, Alworth became the first player to be in inducted into the Pro Football Hall of Fame (inducted in 1978) whose career was mainly played in the AFL. As an aside, I’m surprised that Alworth’s quarterback during his time in San Diego, John Hadl, has not had his name appear in too many crossword puzzles because of the unusual spelling of his last name. 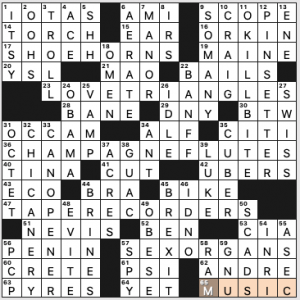 The theme entries could have gone without a revealer, if you ask me, but the inclusion of a revealer definitely keeps this at “no later than Tuesday.” MUSIC is 65a. [What the ends of 17-, 23-, 36-, 47- and 57-Across make], and there are words that double as musical instruments in those themers.

Cute. I appreciate that all the instruments are in the plural—that sort of consistency across theme entries is important.

Here’s a video from 2 Dope Queens featuring triple-Grammy winner Lizzo with the instrument in 36a and mentions of the 57a themer.

Let’s turn this sucker on and check out our “Instrument Panel” for a quick Monday night review of the WSJ: 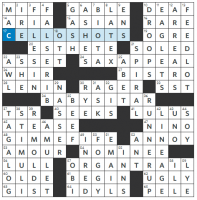 17A: CELLO SHOTS [Pics of Yo-Yo Ma’s instrument?] – Okay, this cracked me up!
24A: SAX APPEAL [Pledge drive featuring Clarence Clemons wailing on his instrument?]
34A: BABY SITAR [Tiny instrument from India?] – I’m not quite sure I get this one. What’s the base phrase? I’m being dense tonight.
48A: GIMME FIFE [Military band director’s order to hand over an instrument?]
57A: ORGAN TRAIL [Aisle a church musician follows to her instrument?]

This was a tale of two puzzles for me. On the one hand, I really enjoyed many of the themers and the approach to the overall theme – both named musicians were people of color, which was nice to see, and the “church musician” was clued as a woman. On the other hand, some of the fill was tough for me to figure out, resulting in a much larger solve time than normal. MIFF/MAC, FALSE RIB, ESTHETE, and LULUS immediately jump out as tough spots for me, but it could also be me solving the puzzle at the end of a long day! Note: Aside from SHE and the “church musician,” were there any other women in this puzzle? I wish there’d been plenty more!

THEME: Fictional animals that follow the formula NAME + THE + ANIMAL.

One of these things is not like the other! I guess the inclusion of ROWLF THE DOG is why the title carefully sidesteps associations with brands or commercialism, as the first three are clearly commercial “mascots.” Still it was fun! There’s something satisfying about filling in long answers without crosses, which I was able to do for the first three. Forgot the zany spelling for ROWLF (actually, forgot his name altogether… couldn’t get the drummer, Animal, out of my head).

Everything here was just fine, though KITTEN feels like it’s trying desperately hard to be included in the theme! 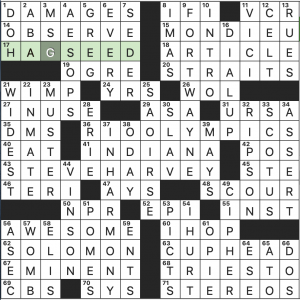 Matt is still the King of pop culture references! Some of these I am totally unfamiliar with. And we are only talking stuff from a few years ago, so I don’t think I forgot all of this! Nice to have 6 themers packed in here as well. 4.4 stars for this one. 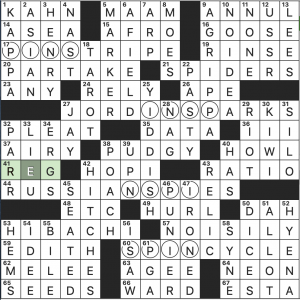 It seems very rare that there is a byline that I am unfamiliar with that is in the constructor database on this blog, but that is the case here. The question for this puzzle is: are the circles needed in the fourth theme entry?

I would say you DON’T need the last set of circles, since it is pretty obvious what is going on, but it’s not a big deal. I appreciate an easy puzzle, which I was able to jam through pretty quickly. Good for my ACPT morale! 4.3 stars for this one.