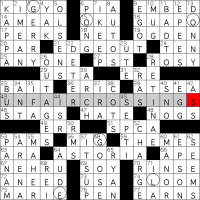 hello and welcome to episode #609 of matt gaffney’s weekly crossword contest, “How Did You Know?”. for this week 5 puzzle, matt dials the difficulty down to week 2.5, asking for a familiar verb. okay. what are the theme answers? the only one in evidence is the grid-spanning central across: {Inelegances that make a puzzle tough to solve (of which there are six herein)} UNFAIR CROSSINGS. what are those six?

of course, the meta answer is GOOGLE, which is what you get when you read the correct letter for each of those crossings in order from top to bottom in the grid. and i’m sure it’s the answer to the question in the puzzle title for many solvers. i actually solved this without google, by writing down the possible letters in each case: [many choices][I/O][A/O][G/M][L/R]E. GOOGLE jumped right out at me, and then of course it made sense in context.

i think it’s kind of hilarious that matt phrased the instructions the way he did, since google (the company) has, like xerox and photoshop before them, waged a hopeless battle against the lowercase generic version of their company name in an effort to protect their trademarks. however, english does not have “proper verbs”, so any verb is lowercase, and indeed, the verb google has had a lowercase entry in merriam-webster’s collegiate dictionary for almost two decades now.

that’s all for me. on to february! as a reminder, you’ll need to sign up on matt’s patreon if you want to keep getting the puzzle every week.