I’m sure I’ve seen some MIXED DRINKS puzzles in the past, but only a handful show up in the cruciverb database. This one is tightened up by the fact that the phrases all hiding the drinks are locations or events where one might have such a drink. That’s a really nice touch! The revealing clue is [What 17-, 28-, 40- and 55-Across literally contain]. In other words, the circled letters are anagrams for the alcoholic drinks mentioned in the clues. 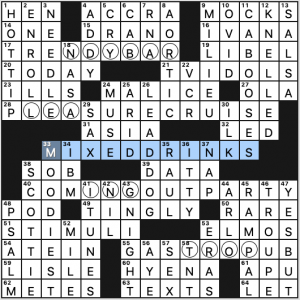 It would have been nicer if all of the drinks were longer than three letters; GIN and ALE seem a little too easy. But I’m sure it’s no simple matter to find anagrams for longer entries. And with the added constraint of using base phrases that are drinking locations, that’s a real limitation. So all in all, a nice, tight theme, that works well.

The fill is good, as you’d expect. I’m liking HOT TIP, MILIEU, MALICE, TINGLY, “YES, BUT…,” SCOTTIE, LEAD DOG, and CABOOSES. That last one felt weird to put in. Why can’t the plural of “caboose” be “cabeese”?

I like G’NIGHT, but it sure looks weird in the grid, as if you replaced a silent K with a silent G. And I’m not sure I’ve ever seen knell as a verb (12d, KNELLED), but it checks out. And I was never going to know ACCRA [Ghana’s capital] nor ADDY [American Girl doll with a back story on the Underground Railroad] but that leading A where they crossed seemed like the only logical choice.

Lots of fun and interesting clues of note, such as: 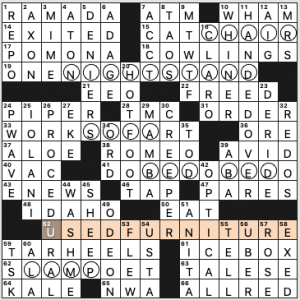 In brief: The theme revealer is USED FURNITURE, 52a. [Some garage sale goods … or what the answers at 15-, 19-, 33-, 41- and 62-Across have done?]. Those entries have used items as furniture as consecutive letter strings within them:

Didn’t care for COWLINGS (do we really need to be quizzed on someone who’s a footnote in a news story from 25 years ago?), ALL RED clued as [Totally embarrassed] rather than [Noted attorney Gloria], ODEON, German TOD, CLARO, AIG. 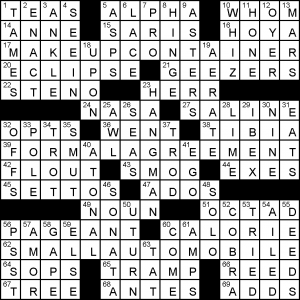 Is there much to say about this theme? A [Compact] is a MAKEUPCONTAINER, a FORMALAGREEMENT and a SMALLAUTOMOBILE. It is indeed those things, though note the theme avoids the more typical adjectival meaning.

The rest of the grid opts for a fairly safe design, with precious few multi-word phrases. Not a lot to note really. 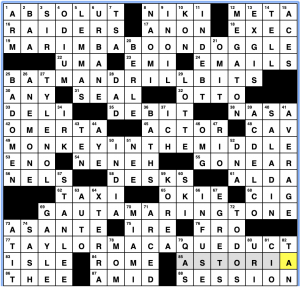 AVCX head honcho Ben Tausig has this week’s puzzle, a 17×17 grid ranked at 2/5 on the difficulty scale.  Let’s take a look at how “Swingers” swings:

MONKEY IN THE MIDDLE neatly describes what’s going on in each theme answer.  There’s the name of a monkey.  It’s in the middle of the answer.  I tried to see if the theme answer minus the monkey was anything.  As far as I can tell, it’s not – they’re just kind of goofy answers with a monkey in the middle.    That’s okay.  It was nice to see Taylor Mac (who yes, uses “judy” as judy’s pronouns) get a shout-out – I have a friend who’s very into the performance piece where judy performs the American songbook one decade at a time for 24 hours.

I had to “werk” to remember that in addition to “Claudia, Linda, and Cindy”, Rupaul mentions NIKI (as in Niki Taylor) in their song “Supermodel”. I was trying to figure out what kind of rebus squares were needed in the grid to make NAOMI Campbell fit.