The letters PH are “dropped” from the two entries high up in the grid and added to the two entries toward the bottom. This is hinted at with the revealer LOW PH [Characteristic of acid, and of this puzzle, in a way]. 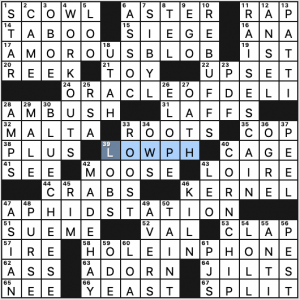 I was skeptical of this theme, but I’m warming up to it. I was expecting the letters to make a vertical drop from the theme entries or just be “low” with respect to each theme entry (i.e. in the row below). But if you look at the grid as a whole PH was “dropped” from high in the grid and is now “lower” in the grid. Okay. I’m good with that.

So the theme works for me. How’s the fill? RAISES CAIN and BLUE CHEESE. Very nice. Some CORN CHIPS t0 munch on and some WORKOUTS to sweat them off. Also good. MADE HAY [Took advantage of sunshine, in a way] is not one I was aware of before I got into crosswords, but it’s legit. Nothing jumps out at me as being off the wall, so all in all, it’s good.

Good theme that grew on me as I thought about it. Strong fill as well. 3.8 stars.

This was a hard-fought win for me, but I got there in the end. It definitely helped to uncover the revealer…which was THREE LETTER WORD [What appears five times each in some Across answers in this puzzle grid while being absent from everywhere else (including clues)]. Each of the other grid-spanning theme entries are comprised of only 3-letter words. There are no others in the grid, and apparently there aren’t any in the clues (but I’m not about to check). 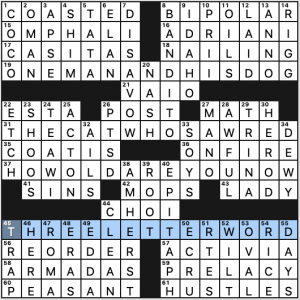 The theme feels more like a constructor’s gimmick than anything the solver is going to notice or enjoy. I’m sure it was a challenge to come up with a grid without any 3-letter words and then to fit everything in without too much crud. The ultimate question is how does it solve.

For me, enjoyably. The fill felt meaty and crunchy and the clues thorny but gettable. Top fill for me: BANDITO, DISAVOW (who else learned this word from Mission: Impossible?), COATIS, AMHERST, EPITAPH, ACTIVIA and HUSTLES.

Had never heard of OMPHALI [Navels] (I bet Jenni knows that one), and the end of PRELACY was difficult to work out. And TEAWI [Kiwi ___ (former Snapple flavor)] is just plain bonkers. All I could do was laugh at that one. Who has that in their word list? Apparently Peter Gordon.

Ultimately for me, the theme was an interesting side note to this puzzle which I enjoyed mostly because of the fill and clues. Four stars. 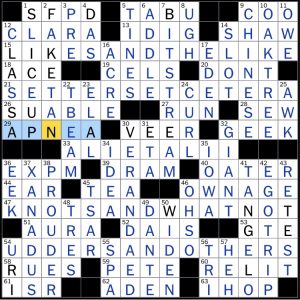 This Thursday NYT’s theme was pretty straightforward, given that Thursdays tend to be the designated “experimental” space.  Instead of any rebus squares or other trickery, we’ve got this:

There’s a whole “phrases for finishing off a list in a general sense, plus something they kind of sound like” theme here that wasn’t my cup of tea.  I don’t really love any of the themers here – none of them feels strong enough to make this whole set worth it.

“Tie a Yellow Ribbon Round the Ole OAK TREE” was #1 on the Billboard chart for 4 weeks in 1973. Stereogum rightly ranked it a 1/10 in its Number Ones series revisiting every song that’s topped the Billboard singles chart.

I’m sure I’m not alone in saying this played like a themeless puzzle, but indeed there is a theme hiding in there!

THEME: Three entries are made up of letters that can be found in the Greek, Latin, and Cyrillic alphabets.

So that’s it. One of those puzzles where you get the theme afterward, shrug, and say “okay.” I mean, it seems like there are quite a few letters we can choose from. But at the end of the day, I don’t really care about letter crossover in various alphabets. In fact, since I didn’t finish reading the clues for GREEK, LATIN, and CYRILLIC, I didn’t make the connection to the starred answers until post-solve (not that it would’ve helped).

As a themeless though, I enjoyed it! Themed? IT’S A LULU. 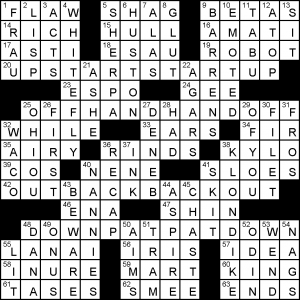 Robert Wemischner’s theme today is quite interesting as well as intricate. It features four “word-palindromes” where two two-part compounds with the same component words are combined in the pattern abba to create wacky phrases. Further, each answer has at least one positional word (OUTBACKBACKOUT is made of two). UPSTARTSTARTUP, OFFHANDHANDOFF and DOWNPATPATDOWN complete the set, which for me all work very well with few if any convolutions of grammar or phrasing.

Again, a fairly busy theme where the rest of the grid is mostly there to hold things together. KLONDIKE dishes out some extra K’s, however.