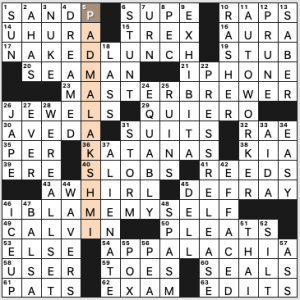 So much to like in this 70-word themeless! We’ve got PADMA LAKSHMI, Burroughs’ weird NAKED LUNCH (never read it, saw the movie, remain haunted), MASTER BREWER, “I BLAME MYSELF” and “WE’RE ALL SET” (both incredibly natural spoken remarks), AUTO WORKER, and APPALACHIA. Raise your hand if you didn’t know [Pittsburgh is its most populous city] because you didn’t know Appalachia encompassed Pittsburgh.

Just five things because I’ve got an early morning ahead: 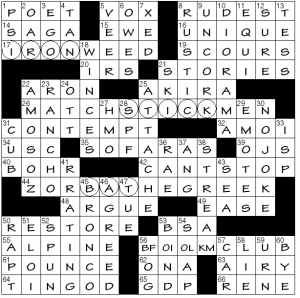 Wow! Very impressed with both theme and construction here. There’s a lot going on here. Let’s run through the theme entries first, then discuss.

Hi. Me again. So we’ve got (1) a Shrödinger revealer with BOOK and FILM, endeavors which are incidentally common fodder for the Chronicle and its sadly departing crossword.  The two years in each of the other clues refer respectively to the dates of publication for the books and film adaptations thereof. (2) each of the titles contains a word that can be considered a type of CLUB: iron, stick, bat. That last is echoed by the title, as baseball has ambidextrous switch hitters as well as bats; further, switch signals the two possible letter sequences that precede CLUB in 56-across. As a fun bonus, the clues for the three titles use the formulation “hit the market”.

Impressive stuff, and well executed. My only nit would be the way the (admittedly complex) theme is explained in the parenthetical hint of the revealer. As I was solving, I thought the “two answers” were two of the three themers above, rather than the potential

answers for 56-across itself, which then led me to wonder where—let lone what—the heck the four down entries would be. Only after figuring it all out was I able to parse that correctly.

There’s some good stuff in here, for sure, but this puzzle from Elizabeth Gorski didn’t quite do it for me today. I love ANTHONY BOURDAIN across the middle (although I totally disagree with his take on truffle oil), and some of the long entries are fun and clever, but the fill not what I’d hoped, and some of the long entries disappointed as well. That said, some of the cluing was top-notch, and I enjoyed the overall “voice” of the puzzle quite a bit! 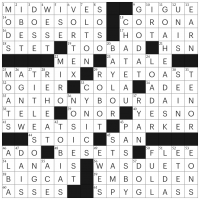 Overall, not my favorite puzzle of the week, but still several stars from me.

Jim P here, in for Jenni.

It’s Friday and that means it’s party time! Each theme answer in this happenin’ grid ends with a word that can be a synonym for “soiree.” The entries are then wackily clued as soirees for the people related to the first word in the term. 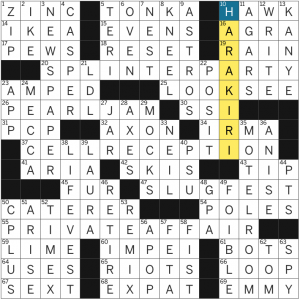 I should also note the theme-adjacent CATERER [Need for big dos] who is no doubt providing the snacks for all this frivolity. Fun theme with enjoyable cluing.

Fill-wise, highlights include NEWSPAPER, CASPER, LIFE VEST, FOIBLE, MOTEL ROOM, LOOK-SEE, and HARA KIRI [Samurai ritual]. This last one is always a challenge for me to spell. I think I tried HARI KARI at first because in my mind I want it to rhyme and sound like the name of legendary sportscaster Harry Caray.

The rest of the fill is strong, too, with nothing to draw a scowl. The AGRA/AGARS crossing isn’t great, but it’s a minor nit.

All in all, fun theme, strong fill, clean grid, and lightly challenging clues. A good time was had by all. Four stars.