A lot of people don’t like circles in their crossword puzzles. I don’t mind so much, as long it’s done well. This one is a good one.

The “Hidden Pictures” in question are one-word (plus one short, hyphenated name) Best-Picture-winning films hidden in satisfyingly-long and interesting theme answers. 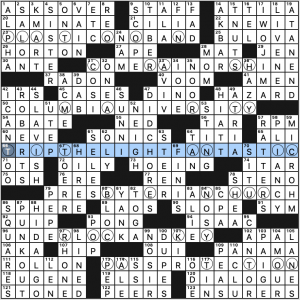 All of these entries are good at the very least, but most of them are better than that, i.e. they’re colorful and lively. A nice themeset.

My solve proceeded pretty smoothly without too many hangups. Faves in the fill include IWO JIMA, LAMINATE, HORTON, PUNK OUT, and HIDALGO. DID CHORES and, especially, LIVENER [Rouser] are on the roll-your-own side, so “meh” to them.

How did you do in that east section with PLIANCY and MICROHM. That was tough to sort out, but I got there. I don’t mind RATTERS [Some working terriers] since my neighbor’s dog is a rat terrier. Oh, TITI [South American monkey] crossing opaquely clued TAN [Fawn’s kin] was another trouble spot. 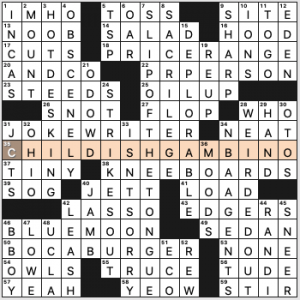 Oh, hey! I know who this guy is, and it’s not from knowing people in the crossword community. Hemant blogs at Friendly Atheist, and I’ve been seeing his non-cruciverbal writings for years. Neat to learn that he’s also a crossword junkie like the rest of us.

Lots of juicy fill in this 68-word puzzle. Among my favorites: JOKE WRITER, CHILDISH GAMBINO, BLUE MOON beer, BOCA BURGER (though I really wanted there to be enough squares for the Impossible or Beyond Burger to fit—Boca Burger sales must be waaaaay down), SLIP OF THE TONGUE, SACRILEGE (good fit for the Friendly Atheist, though I’d argue that anyone who’s not in a particular religion can’t be expected to give it too much care), and WEIRDED OUT (which passes the substitution test despite the verb mismatch: I’m [Getting a strange vibe], I’m WEIRDED OUT).

I don’t think ISN’T SORRY is a crossword-grade phrase, and neither is AND CO.

In addition to Childish Gambino, the puzzle’s got [Rocker Joan] JETT. To play us out, here’s her version of “I Love Rock ‘n’ Roll.”

Four stars from me. Keep constructing, Hemant—you’re off to a good start! 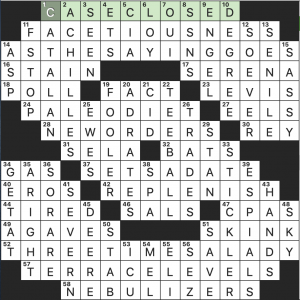 What a grid! I love the S shape. I think I remember there being a Superman themed puzzle with a shape like this one. I almost thought there would be another thematic aspect to this puzzle given the unique shape, but I don’t think there is. There are certainly a lot of S’s in the grid, but unsurprisingly there are slightly more E’s. If I am indeed missing something, please let me know, but this is still a stunning wide-open grid. And a fun solve! 4.5 stars.

I’ll stop there! My next LAT entry is Tuesday. See you then! 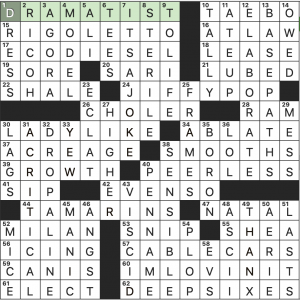 We definitely have a Stumper this week. I had a feeling of dread when starting this one, as literally NOTHING came to me immediately. And by immediately I mean like 5 or 6 minutes! I finally got a toehold in this one in the upper right, which spilled down then to the SE corner, and then the lower left. The upper left I found the most challenging, and that is where I wrapped this one up. I am finding now that I have to really shut everything out to solve these now. Am I actually slowing down? Time will tell! This is another fantastic Greg Johnson puzzle. 4.8 stars for a masterpiece.

Just a few high points, since there are too many to mention:

Everyone have a wonderful weekend!

THEME: Words associated with a “bank” make up the latter half of theme entries.

Seemed a bit weird to have a person in there (the bank TELLER) equated with the objects, but this one worked just fine. Solved alongside a novice solver, and it’s always interesting to see areas that are difficult to hack through, like the SW with ALEUT and ELYSE and the NE with GO A and EDS. And there’s a slew of other things I don’t even consider to be “Crosswordese,” that take a lot of nudging and rewording in order to bring about the correct response. In the end though, my solving partner figured out the theme after reading the title and the longer entries and had a solid AHA moment, which was a joy to see, especially with a relatively basic theme-type like this. It added a coat of freshness.