Back-to-back metas in the WaPo! Brace yourself for the “Get off my lawn!” complaints. In my opinion, this one was much trickier than last week’s, yet tighter and more satisfying to figure out.

META HINT: “The answer to this week’s metapuzzle is a film from the 1990’s” 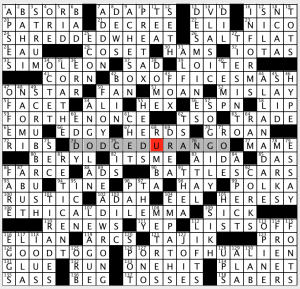 I’m not the sharpest meta-solver, but if I’ve learned anything, it’s to always keep the title in mind, in this case Twist Endings.

And indeed, that is crucial to solving/appreciating this puzzle on more than one level. First off, it suggests we look at the ends of the theme answers, and it also suggests that we should be keeping movies in mind (especially apt since the Academy Awards are airing this weekend). After briefly struggling to anagram those last words, ALIEN jumped out of PORT OF HUALIEN (you know something funky is happening when Evan includes  obscurities as themers). Aha! In fact, each of the theme answers ends with a movie: 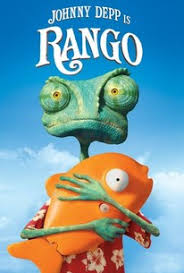 Supposedly, this movie is great. Never saw it though!

The app I solved in on my phone omitted the year after each of the theme clues, so it was unclear to me if SCRUB BRUSH and ALLAN ADALE were thematic or not. Funny enough, both RUSH and DALE are also movies.

So we found some movies. Now what? Back to the title. Nothing has been “twisted” just yet. I was stuck here for quite some time, and when that happens, I employ another meta-solving strategy: Re-solve the puzzle. Also, the second time, I solved in Across Lite, so the years that hadn’t appeared in my iPhone app helped me to be sure of what was/wasn’t thematic. This time, ELIAN jumped out at me. It’s an anagram of ALIEN! Are there more anagrams of the movies in the puzzle? You bet:

And the last meta-solving strategy you need: Always look at first letters in order. 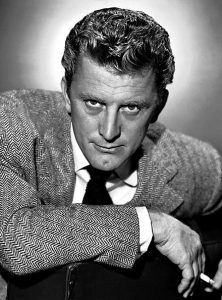 “My son was in that movie…”

THE GAME, which features one helluva twist ending!

This was great! Especially considering how often the title was employed:

That’s awesome. I was initially looking for someway for THE SIXTH SENSE to fit the bill, since that’s famously twisty at the end and sounds sorta kinda like it lends itself to the creation of a meta-puzzle, but I was much more satisfied uncovering the correct answer instead. 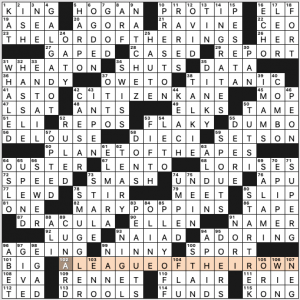 It’s Oscar weekend, and both the WaPo and NYT Sunday puzzles focus on movies. The NYT theme is really cute: emojis are used to suggest various movies. (I did the .puz file version, which bracketed the words that the clue emojis represent.)

It’s weird to have six 3-letter theme entries in any puzzle, but especially odd in a Sunday-sized puzzle. Also weird to have 16 theme entries, but with the short ones, the surrounding fill is actually pretty solid. I think this is the constructor’s debut, so it’s even more impressive that he wrangled entries like PRO TIP, GAL GADOT, SMUGGLER, PLAYOFF, and STAR TREK, and no junk.

Do you think the filmmakers would be dismayed to know their movies can be boiled down to a trio of emojis? I think yes. It’s fascinating from a linguistic standpoint, though, isn’t it? That a very small number of hieroglyphs, basically, can encapsulate the storyline, characters, setting, and sometimes dialogue of a couple hours of a film?

It took me a while to figure out the theme and I got stuck in some silly places (totally my fault, not the puzzle). Once I hacked my way through the mental weeds, I enjoyed this puzzle. The theme answers take the word “cry” out of well-known phrases and replace it with something that rhymes. 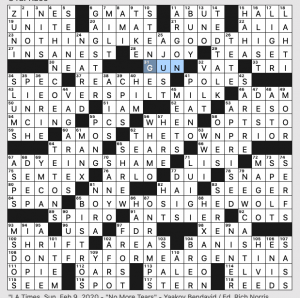 Kudos to Yaakov for finding two 21s that fit the theme. All the base answers are solid, all the themers are amusing. Nice!

What I didn’t know before I did this puzzle: that ETHAN COEN co-directed a movie called “The Ballad of Buster Scruggs,” that STENGEL wrote an autobiography called “Casey At The Bat,” or that Panasonic bought SANYO in 2009. Casey really slowed me down because I somehow missed “autobiography” in the clue and was trying to figure out how THAYER fit in (he wrote the poem).