This felt harder than a typical Monday, but that may be the ongoing fatigue from a ridiculously long travel day on Friday. It takes me longer to recover than it used to.

The Oscars are tonight – as I type this – and the Monday puzzle gives us familiar phrases clued as if they applied to the movies. 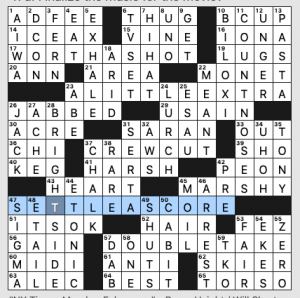 All the phrases are solidly in the language and the clues are amusing. A nice Monday theme.

Haven’t heard (or read) the word MOIL in a long time. I could do without seeing it again any time soon, especially in a Monday puzzle.

I flew through this grid in what I think is a personal best. Seems appropriate given the theme. 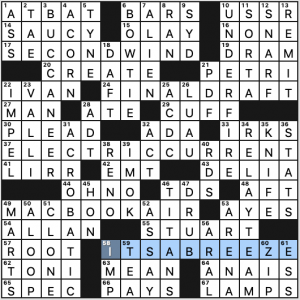 So that last one seems like an outlier to me. Are there any alternatives that could be used? Puff, maybe? POWDER PUFF fits, too.

As I said, I flew threw the grid, so that must mean the fill is smooth and clean, right? Pretty much, yeah. The long Downs are nice (BUCCANEER, UNDER FIRE, ACROBATIC, RELAY TEAM), and there’s really nothing that IRKS (check that; not a fan of LIRR [Line between Manhattan and Montauk: Abbr.]). Cluing is very straightforward, with nothing I feel I need to single out.

Apart from one outlier in the theme, this truly was a breezy Monday grid. 3.5 stars.

For the New Yorker’s “Anniversary Issue,” we have a tribute puzzle to the TOP HAT wearing mascot of the magazine (and the puzzle). I’ve gotten so used to reviewing themelesses over here that I barely know what to do with myself when faced with an honest-to-goodness theme! I’ll do my best. 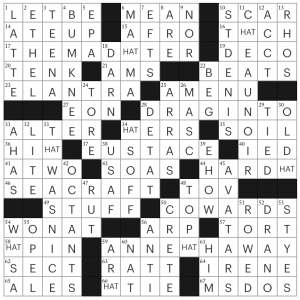 Theme: HAT rebuses as a tribute to “Dandy (EUSTACE) Tilley, who is often seen wearing something found in eight squares in this puzzle”

So, this was entertaining, but the big draw of rebuses (for me) is not knowing that there’s going to be a rebus… so when the site announced the mechanics for how to fill in a rebus before launching the puzzle, that sort of took away the element of surprise that usually makes rebuses feel satisfying.

I’m also (as I have been surprised to learn about myself in the course of solving this puzzle) a bit of a stickler for the NYT standard of having the rebus letters either span multiple words or not mean the same thing in multiple entries. In the themers above, I highlighted the instances when the rebus literally just mean HAT. I think having one like that would be fine, but having 5 or 6 (depending on how you count MAD [HAT]TER) literal HATs in the grid was a little excessive.

Eustace Tilley in his weekday attire

Given the density of the theme (eight HATs!), the fill is pretty good! That said, I think I’d have preferred less theme (maybe cutting the literal HATs) if it meant less of ATWO SOAS ARP TOV MSDOS IED AMS.

Overall, some stars for a cute puzzle concept, but I hope the themelesses come back soon! 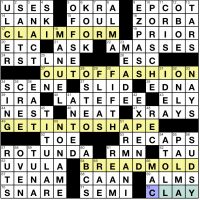 I think the theme here is that the last word of each theme entry is what you can do to CLAY: form it, fashion it, shape it, and mold it. I also know that a form and a mold are both nouns associated with CLAY, so maybe that? It doesn’t feel as tight of a theme as maybe I want it to be – or maybe the themers work but they could also be describing dough or other shapeable objects so the overall idea didn’t fully click for me. Otherwise, the puzzle felt nice and straightforward for a Monday, aside maybe from the ZORBA / CRIS crossing, LON, and RUR.

No music references and very light on names! That coupled with some very clever cluing made this a different, yet thoroughly enjoyable and difficult BEQ themeless.

Laugh moment for me at 24A [Salad bar selection] ENDIVE. I guess I need to start visiting swankier salad bars! Or maybe I just never see the ENDIVE. I’m more of a “throw some ranch dressing on that iceberg lettuce and call it a day” kinda guy.

Liked the fun fact at 1D [First woman inducted into the Harvey Award Hall of Fame for cartooning] CHAST. Loved the interview with her on Fresh Air.

I don’t understand the clue for 36D [Piece of wax] RECORD. Any help?