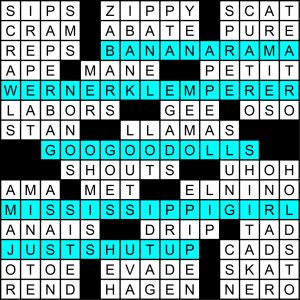 Title: “And Sometimes…”
Prompt: The meta for this puzzle is a band with more than 10 letters in its name.
Answer: Lynyrd Skynyrd

This was a quick thrill for me, since the answer fell in 59 seconds! Yes, I stopped the clock in Across Lite when I had it and was super-stoked to get in just before it ticked up to a minute. I solved for a bit, got WERNER KLEMPERER, looked at the theme clue above it and realized it was BANANARAMA, checked the title again, and realized it had to be Lynyrd Skynyrd in under a minute. Go me! Or, as the too common crossword entry has it, I RULE.

Backtracking from that excitement now, we see that the five theme entries each contained just one of the five main vowels apiece:

34-A: [“Iris” band] = GOO GOO DOLLS. What’s this? A, E,…O? I guess there was no other way to make this theme happen or Pete would have done it, but this weird progression of A-E-O-I-U is a big aesthetic blot.

48-A [Faith Hill song with the lyric “I still like wearin’ my old ball cap, ridin’ my kids around piggyback”] = MISSISSIPPI GIRL

So we need an 11 letters or more band with the only vowel being Y, and that of course is LYNYRD SKYNYRD, whose tour bus I have randomly spotted on I-81 here in Virginia twice over the past 12 years. Pete added the minimum on letters since otherwise something simple like STYX or XYZ would work. Not sure if there’s a specific longer-named band Pete was guarding against with the more-than-ten specification.