This week, we’re looking for a college founder. Are college founders common knowledge to people who haven’t attended the college/university in question? (Or to people who haven’t attended college?) If you solve many crosswords, and you likely do if you’re reading this blog, you’ve probably heard of Elihu Yale, since he ends up in more than a few grids. But … well, here’s an open secret: many universities are named after the dude (in the history of American higher ed, yes, most often a dude) who gave the most money, not the one who actually taught classes and designed curricula and built buildings. Turns out, that’s actually the case with Mr. Yale, who sent Cotton Mather a bunch of books in 1718 and got the place renamed after him.

Okay, the puzzle. No themers pop out immediately, but we do have a hint in the center:

Yeah, we knew it had something to do with education … which is in the title, “Continuing Education” … so, oh! The names of six institutions of higher education continue over two across entries, with an additional letter in the center: 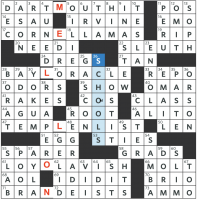 If you take the letters needed to complete the university names —

DARTMOUTH (founded by Eleazar Wheelock in 1769; named after William Legge, 2nd Earl of Dartmouth, who gave money) [Full disclosure: I work there, and I had an easier time recognizing it than the last time my place of employment appeared in a Shenk grid]
CORNELL (cofounded by Ezra Cornell in 1865 with funds from the Morrill Act)
BAYLOR (cofounded 1841 in the independent Republic of Texas by Baptist minister and judge Robert Baylor)
TEMPLE (founded 1884 by minister Russell Conwell in the basement of a Philadelphia Baptist temple)
LOYOLA (There are a number of Loyolas [Loyolae? Loyoli?] in the US; the one in Chicago was founded in 1870 by Jesuit priest Father Arnold Damen [also the namesake of a major north/south avenue in Chicago] and named after St. Ignatius Loyola)
BRANDEIS (founded in 1948 as a non-sectarian Jewish university by Israel Goldstein and George Alpert; named after Supreme Court Justice Louis Brandeis when Albert Einstein declined the honor)

— you get MELLON, who is indeed a college founder, and our answer. Andrew Mellon, banker, industrialist, and all-around rich guy of the Gilded Age, him of the foundation that underwrites much in higher education and the humanities, with his brother Richard founded the Mellon Institute of Industrial Research in Pittsburgh in 1913. In 1900, the other rich Pittsburgh guy named Andrew, steel baron Carnegie (who also funded an expansion of local public library building in small American towns, including mine), founded the Carnegie Technical Schools. In 1967, the two Andrews’ namesake institutions merged to become Carnegie Mellon University.

It was interesting to have all the themer/meta content on the left/west side of the grid, leaving the right/east side relatively open. A friend writes that [15a: Where the NCAA’s Anteaters play]: IRVINE was a bit of a red herring, as was [23d: Register]: ENROLL and [59d: Brown building]: DORM.

I gotta give you a song, tho! So many to choose from but let’s go with this classic. “California tumbles into the sea/ That’ll be the day I go back to Annandale.”