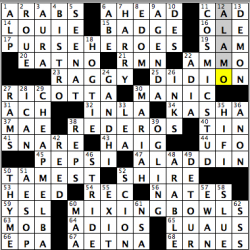 Hello, hello! Hope all is well with you today as Valentine’s Day fast approaches!

Today’s grid is fun with anagrams, and it’s really a well-executed theme. Multisyllabic and/or two-word nouns are turned into puns when one of the words in each entry has its letters shuffled to create a new word…and a new meaning. There also is a reveal entry in the grid, MIXING BOWLS (60A: [Kitchen containers that inspired the puzzle theme]).

This was one of those grids where one can definitely imagine laughing a little once discovering the theme, as I definitely did that after the first one (purse heroes) fell into place. Before that happened, it took a little extra to figure out what was actually going on as I first tried to put in “Mr. Olympia” for 11D before realizing that wasn’t going to work and figuring out where to go from there. There’s enough attractive non-themed fill to enjoy as well, with HOGTIE being my personal favorite (18D: [Render helpless]). DIDION did not come to me at all and had to use all of its crossings to nail it down (25A: [“The Year of Magical Thinking” author Joan]). I was very intrigued by SLUE because of two reasons: 1) That spelling is one you don’t see often and, 2) the word’s wide usage in hockey over the past couple of years, as slew-footing has been cracked down upon in the league big time (58D: [Pivot]). A little Los Angeles sports theme was present as well, with both IN LA (32A: [Where some Lakers live]) and RAMS in the grid (27D: [Farm fathers]). Speaking of sports…

“Sports will make you smarter” moment of the day: RMN (21A: [LBJ’s successor]) – This past 2019 college football season was the sports sesquicentennial and, 50 years prior, the city of Fayetteville, Ark. hosted the contest that became known as the “Game of the Century” during college football’s 100th season, top-ranked Texas against No. 2 Arkansas on Dec. 6, 1969. The game captured so much of the nation’s attention (more than half the TV sets in the country were tuned in to the game at some point) that Richard Nixon attended the game in person and would hand out a plaque to the winning team in the locker room afterward and declare it to be the national champion —  even though the game took place almost a whole month before the New Year’s Day bowl games that bring an end to the season. Texas scored 15 fourth-quarter points to defeat the Razorbacks 15-14 and, on New Year’s Day, the Longhorns defeated Notre Dame in the Cotton Bowl to officially win the national title. Here’s the postgame scene in the Texas locker room after its win over Arkansas, RMN included. 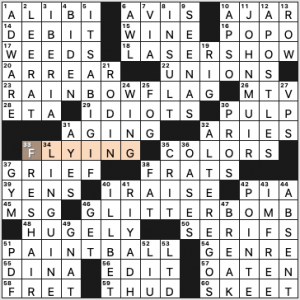 The grid’s a 74-worder, with those open corners that you don’t expect to see in a Tuesday puzzle. The plus side is fill like JOHN MUIR, FRESH AIR, and LINGUINE. In the DEBIT column, we have PIA Zadora, OATEN, and the iffy “IT’S A BIG IF.”

Let’s see what the “Private Sector” has in store for us: 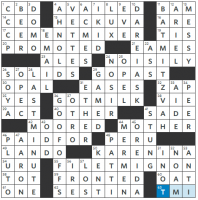 11D: BAT MITZVAH [Rite of passage for a Jewish girl]
17A: CEMENT MIXER [Machine with a revolving drum]
28D: LAST MINUTE [Just under the wire]
36A: GOT MILK [Ad question since 1993]
55A: FILET MIGNON [Expensive cut]
63A: TMI [Response to oversharing found in this puzzle’s starred answers]

A nice theme, in which the letters TMI span the two words of the theme entries, and in the same ___T MI___ manner. I appreciate the consistency and set of vibrant themers – not a dud among them. I also very much appreciated that BAT MITZVAH got attention in a way usually reserved for the male version. I was bummed, though, that Ray EAMES – co-designer and equal partner with her clued husband [Chair designer Charles] – was left out of the puzzle.

Other thoughts:
– Wow at CBD being given the go-ahead in this puzzle!
– The 3 / 7 / 3 sections at the top and bottom of the grid made for some interesting fill and a bit tougher of a solve, which I didn’t mind one bit.
– Nice OPAL / OPEL and OTRO / OTHER pairings. Why is it not considered a dupe when the same word is in the grid twice, just in different languages? 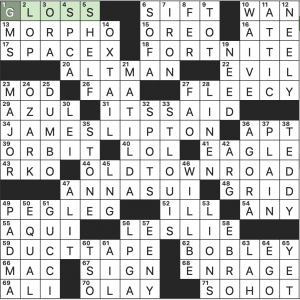 We have the final installment of Matt’s review of the 2010s, and this one also has a pile of theme entries, many of which are quite informative and I had no idea of before solving this puzzle! 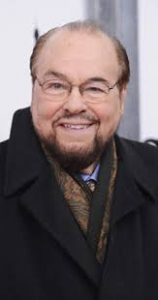 As promised, lots of themers. Not quite all symmetrical, but some of these entries would be fill regardless of the theme, and if you can mention your theme years in extra spots, it’s all good in this case. Let me know if you disagree and this bothers your sense of puzzle symmetry! 4.3 stars for this one, and we now return to our regularly scheduled Jonesin’ next week! 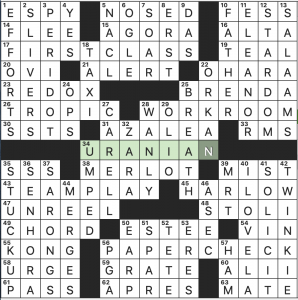 It took me a little bit to figure out what was happening here, but there is a revealer at the very end:

We are all familiar with the terms first mate, classmate, workmate, etc. You get the idea. Nicely done, and I almost didn’t see that revealer clue! Nice puzzle, and it doesn’t seem to Tuez! 4.2 stars. 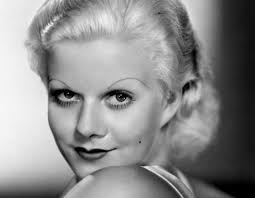 This appears to be a debut for Miriam Estrin! Congrats! A tight and tidy puzzle to boot.

THEME: Phrases that rhyme and are separated by the word “to” 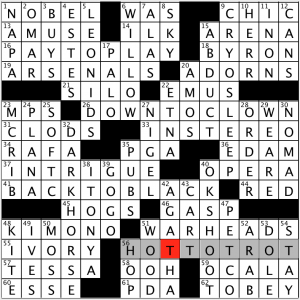 Sure the theme is relatively basic, but it’s very solid. The theme entries are fun and engaging (especially DOWN TO CLOWN, which is new for me, but I love it) and they follow a strict formula of 3 letter word + to + 4 letter word (even the title!).

The fill too is fresh and shiny. The grid has room to breathe and at 74 words, some longer entries can shine, like OK SHOOT, WARHEADS, DARK HORSE, CRYOSLEEP, IN STEREO, and I TONYA.