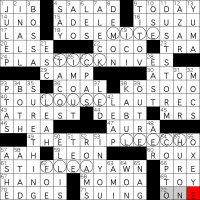 hello and welcome to episode #610 of matt gaffney’s weekly crossword contest, “There Will Be Blood”. i attempted this week 1 puzzle without the instructions, and while i wasn’t able to solve it like that, it was easy enough once i peeked at the instructions, and in retrospect, perhaps i should have known. anyway, what are the theme answers? there are five long acrosses in the grid, each of which hides a blood-sucker of some kind:

so what’s going on here? mite, tick, and louse are arachnids; flea is an insect; and leech is an annelid (worm), so it’s not about taxonomic classification. the straightforward answer (that i certainly should have seen!) is that they’re all parasites. eventually i did give up and check the instructions to discover that we were looking for a Best Picture nominee this weekend. that was a real headdesk moment; of course the answer is PARASITE, a nominee at the time matt sent out the puzzle but now that it’s tuesday, the puzzle is even better because PARASITE actually won best picture. nice going, matt!

i joked to matt that the academy’s decision to once again go without a host for the oscars ceremony might be a bad sign for PARASITE, but looks like the joke was on me, as bong joon-ho scooped the awards for best picture, director, original screenplay, and (naturally) foreign film. i also learned this weekend that bong had an earlier film called the host (2006), at the time the highest-grossing south korean film ever. maybe that’s why parasite was unaffected by the oscars’ lack of a host?

hidden word themes often hide the words across word breaks; here, TICK, LEECH and FLEA span two words each, but MITE and LOUSE are just contained in one word, and there are various words in theme entries (SAM, LAUTREC, THE, YAWN) that didn’t participate in hiding any parasites. it didn’t bother me at all, but perhaps it would have been more elegant to hide them in a more consistent way. i’m just spitballing here, but maybe JEALOUS EX, OFF-LEASH, and … i guess i can’t think of anything good for MITE. ADMIT ERROR or COMMIT ERRORS, maybe, but those are a bit forced.