Valentine’s Day is nigh and love must be on the minds of the WSJ editorial staff and constructor Sam Donaldson. He brings us a listing of terms of endearment but re-casts them as love interests for an appropriate person. At first I was thinking the person involved was meant to be in love with the thing involved (yachter loving a boat, for example). Now I’m of the opinion that the theme entries are pet names used by the people involved but for another person. That makes more sense to me. 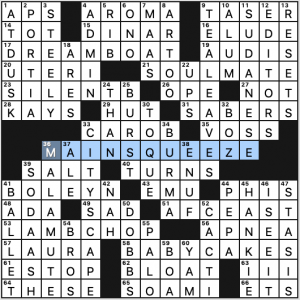 So yeah. Maybe I’m just being dense, but I was confused by what the theme was intending. This is unfortunate since it looks to be pleasantly light. Once I got past my confusion, I liked it fine.

Fill in the grid feels like a mixed bag. I like CITYSCAPE, MALAMUTE, SUDANESE, BOLEYN, and TOQUE. I like TEA LEAVES as well, but it was tough to parse where it crossed AUDIS [R8 Spyder and e-tron Sportback, e.g.] and VOSS [Bottled water from Norway]. AFC EAST feels like kind of a clunker, as does SODA ASH [Compound used in water softeners] and stale crosswordese like OPE, ESTOP, and ARTOO were also distracting.

Cute theme that was a little confusing for me. Fill and clues are fair. 3.5 stars. 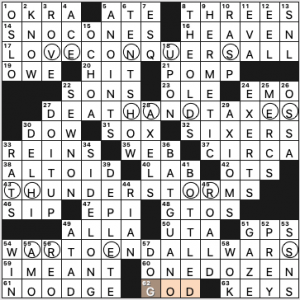 Happy Lincoln’s Birthday to you all! That’s a state holiday here in Illinois.

The theme revealer is GOD, 62a. [What each set of circled letters is, relative to the first word in its answer], and we’ve got two Greek gods, one Roman goddess, and one Norse god. I wonder if an Egyptian god could have been part of an apt phrase to replace one of the Greeks here. 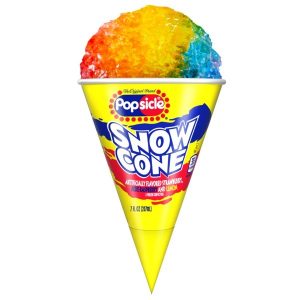 I had mixed feelings about the fill. I liked NOODGE, SIDELONG, THE OLDS, and possibly even BAT GUANO. Less keen on SNO-CONES (the weird variant spelling of snow cone that lives mainly in crosswords), TENT SHOW clued as [Circus] (is that a regionalism or something? sounds alien to me), singular ALTOID, EPI-, GTOS, UTA, AMO, REO, MERCS, OSSA, and SSNS. Some definite Scowl-o-Meter action tonight. I don’t know how I feel about DO IT UP. Do you like the entry? 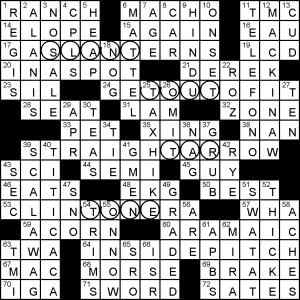 I like the surprise variation in today’s theme. Hidden letter strings are rather common in the LA Times, but today’s does something slightly different. I have no idea what the clue for INSIDEPITCH meant beyond [Blah-blah baseball…] but each circled letter string is a different meaning of PITCH – SLANT as in angle; TOUT as in advertisements; TAR as the goopy stuff; TONE as in the colour. Very creative!

The entries themselves were a tad on the lacklustre side, which goes with the territory of squeezing in five: plural GASLANTERNS, sort of contrived GETOUTOFIT, and undifferentiated CLINTONERA.

Unexpectedly, we have a pair of funny-to-say geography names in the longer fill: TITICACA and MACKINAW… 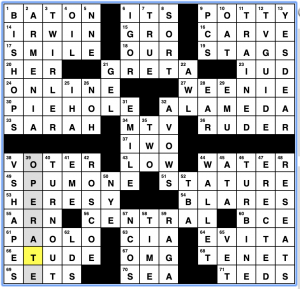 Patrick Blindauer has today’s AVCX, and “T Time” is an apt descriptor of what’s going on in the grid.  7 clues fit in T-shaped pairs of entries, with a T at the fulcrum of each T-shape:

I have a little bit of a quibble with MTV TWO as an entry, since the channel’s name started out as M2 and has always been stylized as MTV2 since a rebrand in 1999.  Otherwise, this is well-executed