In Mike Shenk’s signature style, we’re presented with phrases whose beginning or end can be a term of endearment. These words are separated from the main phrase and given the clue [Sweetheart]. The title is the indication that something is “broken off” from something else. 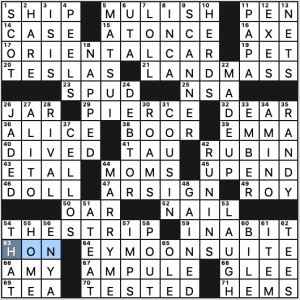 I’m usually on alert for this type of theme when we get a Mike Shenk grid, but I guess I was caught napping. I was slow to catch on. And with the many opaque clues, my time suffered. But on the whole, an enjoyable theme and puzzle.

In theme-adjacent news, we have a couple of EXES at 12d, another couple that’s MADE UP at 22d, and another one just getting started: MARRY ME at 44d. Presumably, the RANDY couple is on their way to the HON /EYMOON SUITE so they can romance in multiple rooms.

Other goodies in the fill: THE STRIP (in Vegas), LANDMASS, and re-learning that Dionne Warwick is Whitney Houston’s COUSIN. I did not know [Kaz who homered on the first pitch of his MLB career], but I must have heard the name MATSUI before. That’s a fascinating stat, too! 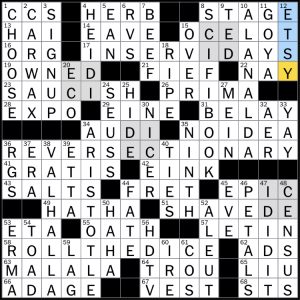 It’s Thursday, you know the drill.  There are shaded parts in this grid!  Let’s determine what that means:

Each of the theme answers does the crossword equivalent of a roll in order to take in all the letters of DICE as it passes by the shaded squares.  I didn’t know that there was such a thing as a REVERSE DICTIONARY, but they even exist online.

I had to look at Peter’s answer sheet to figure out what the heck was going on with this puzzle. I finished it and got Mr. Happy Pencil, but the theme made no sense.

Each theme answer has punctuation and the square for the punctuation is included in the grid. The program I use to solve won’t allow me to put punctuation in, so here’s the grid with the letters from the Down clues. 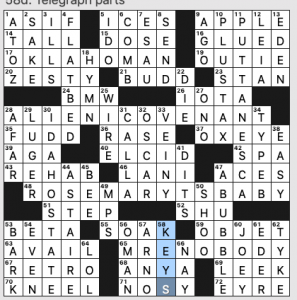 The Downs crossing the punctuation marks all refer to the telegraph, so I figured that was where the “cable” from the title fit in. I’ve highlighted the crossing letters.

The letters make a word (sort of) – NITE. That doesn’t have anything to do with the title, and I did not find it enlightening. I looked at the clues and nothing jumped out at me. So I finally looked at Peter’s explanation.

I would never have figured that out because I don’t know Morse code. I guess if I’d thought of it, I could have looked it up, but that never occurred to me. Every now and then I run into a puzzle that I admire as an impressive feat of construction and do not enjoy solving at all. This is one of those.

What I didn’t know before I did this puzzle: well, Morse code and the existence of ALIEN: COVENANT. I also didn’t know that APPLE was the first company with a market capitalization of $1 trillion.

THEME: Units of volume can be heard in the first syllable(s) of common phrases.

Great revealer to an overall fun puzzle. I figured out the idea of the theme, but the revealer was a nice surprise. In addition, some sparkly fill included FLAT SCREENS (plural maybe a touch awkward), DEAD TIME, and PEARLY GATES.

I suppose this puzzle was run today due to the timeliness of the GALETINE’S DAY entry. That phrase is new to me this year, but man, I’m hearing it non-stop (quite possibly even more than VALENTINE’S DAY.

Thanks for this one! And happy V.D. y’all! 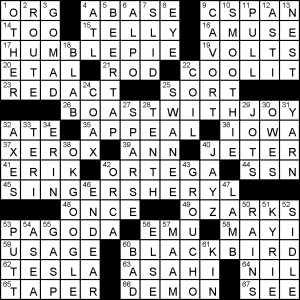 Repeated definitions are on record as one of my personal least favourite theme tropes. When I am confronted with them I prefer already-acceptable answers like HUMBLEPIE and BLACKBIRD. SINGERSHERYL is simple enough, though BOASTWITHJOY is more like the annoyingly weird phrasing typical of the theme type.

I appreciate that Scrabbly letters were not used gratuitously, but rather to include interesting answers like XEROX, OKGOOGLE, JAYZ and OZARKS.