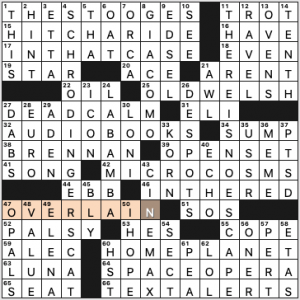 Fave fill: THE STOOGES (I don’t know any of Iggy Pop’s music, I confess, but this New Yorker profile made me adore him), HITCH A RIDE, “IN THAT CASE,” DEAD CALM (also a movie), AUDIOBOOKS (not for me), William BRENNAN, MICROCOSMS, HOME PLANET, SCHRODINGER’S CAT, and LA BAMBA.

Didn’t care for ONER, not one bit.

47a. [Superimposed], OVERLAIN?? I’m fairly confident I’ve never encountered OVERLAIN. If you didn’t have the N solidly in place when you hit this, you certainly went with OVERLAID first.

3.8 stars from me. Happy Valentine’s Day!

I liked this a lot! The staircase in the middle is neat, there are some fun long downs, and the fill is almost all clean.

I’m always here for Olsen twin movies, and throwing in IT TAKES TWO with only a couple crosses broke open the NW and led right into the central staircase (although I do not recall HENRIETTA Pussycat, but I feel like I should!). 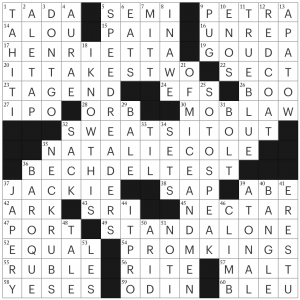 The staircase consisted of SWEATS IT OUT / NATALIE COLE / BECHDEL TEST, all of which are great entries on their own and seem to resonate as a unit as well. Although I’m not going to count, I’d guess this puzzle also passes Fiend’s modified BECHDEL TEST metric, given the prominent featuring of such women as NATALIE COLE, JACKIE Joyner-Kersee, the Olsen twins, Madonna (with her album TRUE BLUE), HENRIETTA Pussycat, and probably some others in the cluing. It’s worth noting that the actual BECHDEL TEST is more complicated than just counting women. Here’s a quote I read last night in this week’s New Yorker magazine about “Birds of Prey,” the Harley Quinn movie:

[Birds of Prey], peopled as it is by women who talk among themselves, with only fitful reference to men, doesn’t so much pass the Bechdel Test as ace it, while also ticking the profanity box, the ear-splitting box, and the bone-snapping box—every box, in fact, except for the tricky one that requires a motion picture to be good.

Other solid entries include: SPEED READERS  (cleverly clued as “They’re real page-turners?”; OF MICE AND MEN; MOB LAW (“Ochlocratic system” – I learned a new word!); I KNOW THIS and SO TO SPEAK, both colloquial but definitely in the language and perfectly clued.

Overall, plenty of stars from me!

THEME: The letters of the word BOOB have been cut off from theme answers and go down each SIDE of the puzzle 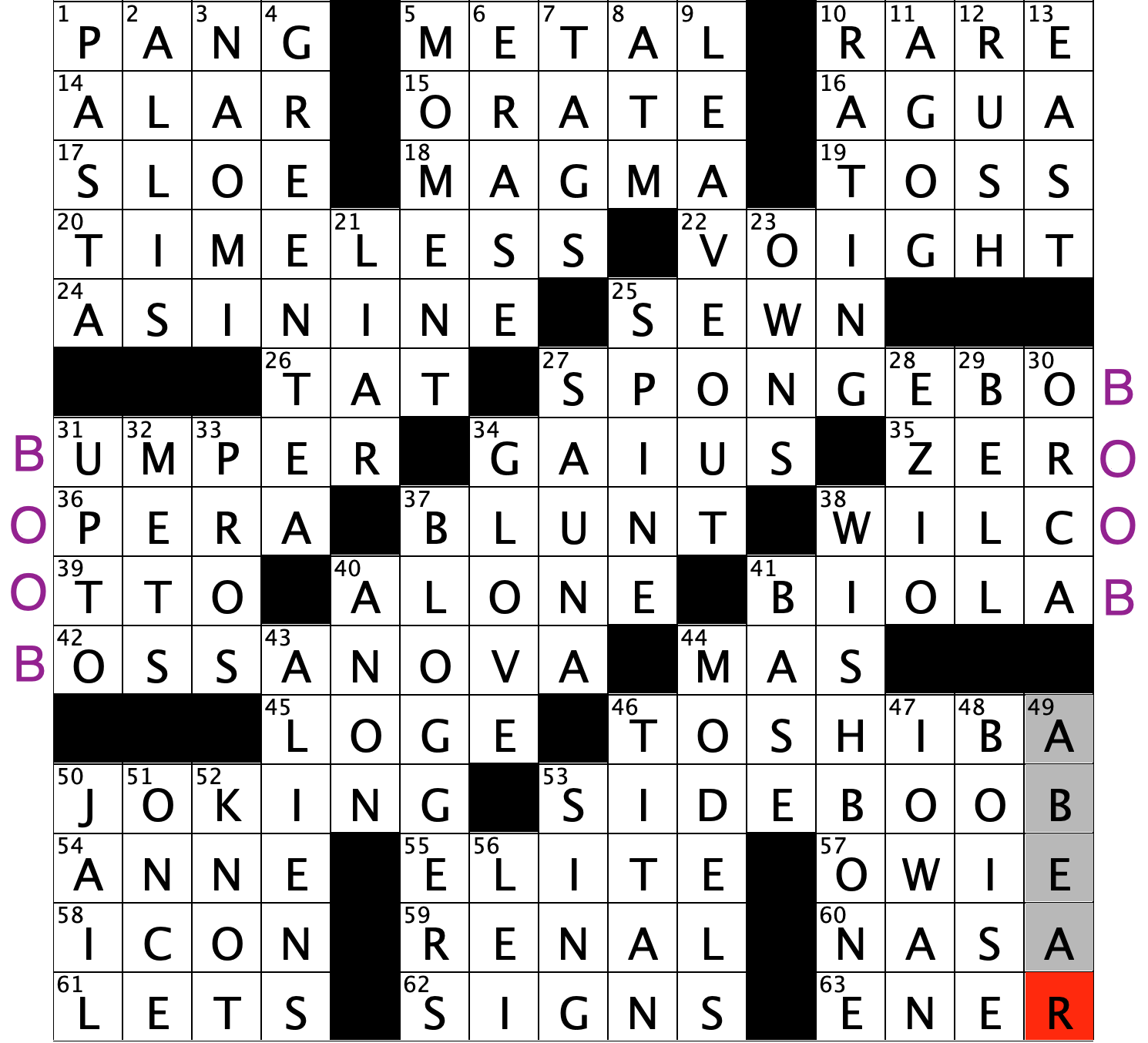 Is February too early to declare a favorite theme of the year? I absolutely loved this puzzle. This theme is so clever and fun and funny and really really well executed. My first clue that something was up was coming across SPONGEBO – the answer was a gimme but lacking the letter space I continued to see if other themers would pop up and give a hint to what the next step should be. When I came across the revealer, SIDE BOOB, I was able to fill in the answers.

Outside of the theme, there are a lot of great answers in the grid. I’m a huge BSG fan so I was ecstatic to see GAIUS [Baltar of “Battlestar Galactica”] show up. And I’ll never not be excited seeing NAOMI [Osaka of tennis] in a puzzle. GREEN TEA, BLOGGERS, LEAVE OUT, and WISHBONE round out the puzzle connecting each section in a really smooth and enjoyable way.

Excellent debut from Allegra and I’m looking forward to all of her future puzzles! 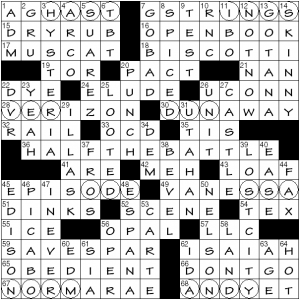 Maybe a bit cynical (however, see discussion below) that this should appear on Valentine’s day, but as we all know available slots are limited as the CHE crossword ends its run in two week’s time.

36aR [Successful beginning … or what each set of circled letters represents on its line] HALF THE BATTLE. Accordingly, there are two 8-letter battles and two 6-letter battles, neatly halved as described.

These days, pretty much anything can precede “… is half the battle”, but the idiomatic phrase dates back to the 1773 comedic play She Stoops to Conquer, by Oliver Goldsmith. Therein, a character observes that “the first blow is half the battle.”

What’s the context, you may ask. Nothing military or involving physical combat—in fact, it’s about courtship!  Two men wish to make a good impression on their host’s daughter. One says, “I have been thinking, George, of changing our travelling dresses …” and the other replies, “You’re right: the first blow is half the battle. I intend opening the campaign with the white and gold [waistcoat].”

And guess what? Who is this George who speaks the line? Why, it’s George HASTINGS, our first battle! Can’t help but wonder if all these connections were intentional on the part of the crossword constructor.

It’s all near the beginning of the play’s second act, which you can read at Project Gutenburg.

Apologies in advance: (listen if you dare)

THEME: Theme answers include two Ps within the letters P-O-D 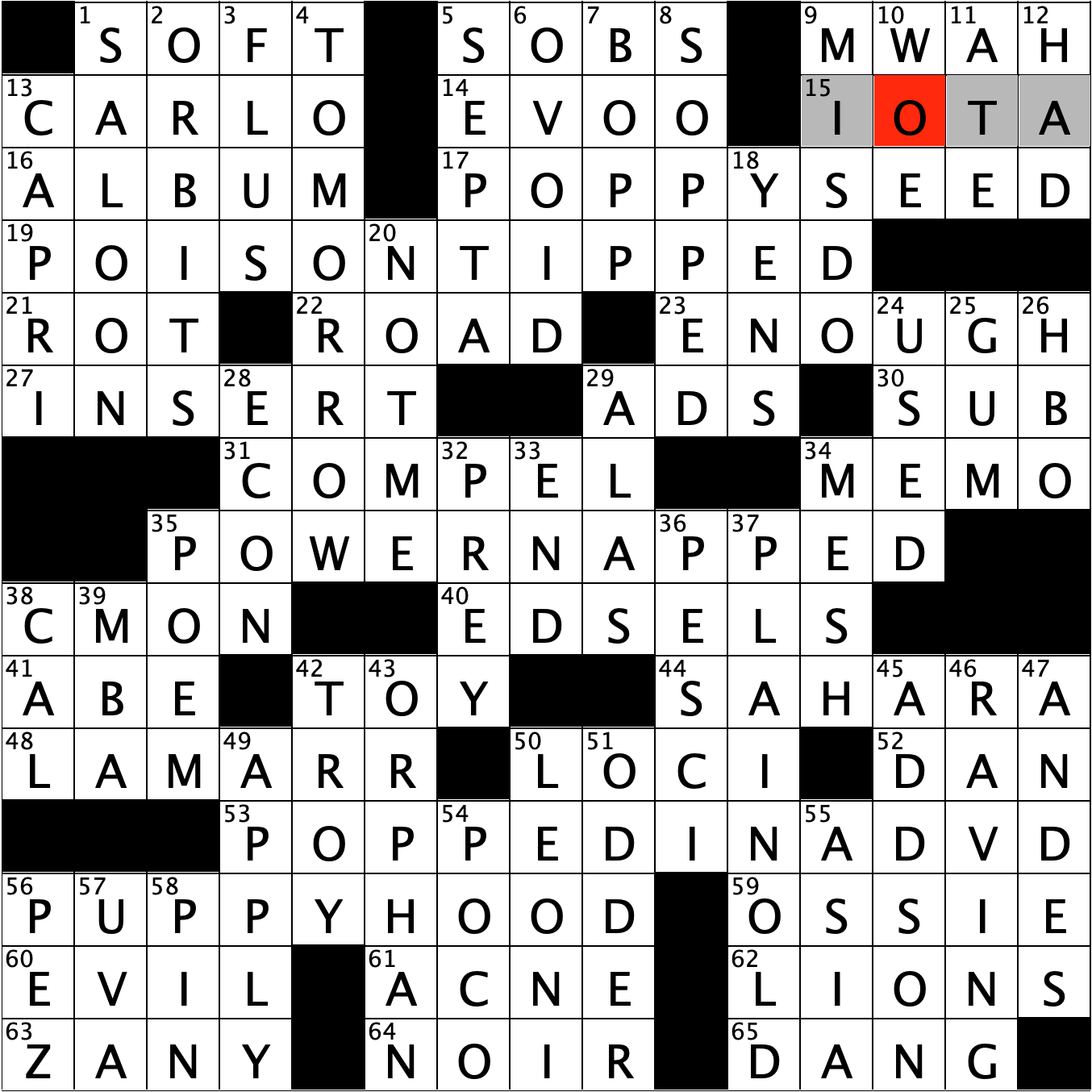 Cute idea – and overall the puzzle is smooth – but a couple of the theme answers felt a bit forced – particularly POWER NAPPED – which I’ve never before seen in the past tense and POPPED IN A DVD which felt a bit archaic in the age of streaming.

Was slowed down a bit in the southeast because I had VIOLA before OSSIE [Actor and activist Davis] and definitely read the clue for SAHARA [Largest hot desert] as dessert instead of desert – but outside of that a smooth grid and fun solve.

Two Fireballs in one week – actually within 72 hours! The downside is that there’s no FB next week. Nothing’s perfect.

In stark contrast to the last puzzle, this one left me wishing it were a smidgen tougher. It fell quite easily even though I didn’t know one of the three long Across entires in the NW. Let’s look at that corner, shall we? 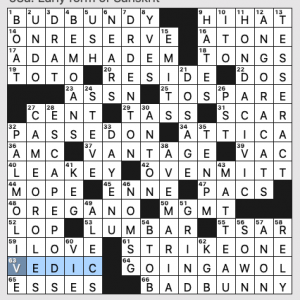 Other things I liked: ANGORA CATS clued as [Some longhairs], TESSERACT (which will always be associated with Meg Murry in my mind), ESCAPE PODS, OVEN MITT, and DR DENTON.

What I didn’t like: 32a [Went to a better place] for PASSED ON. I’m not all that fond of euphemisms for “died.” They epitomize the American queasiness about the very idea of death, which in turn makes it much more difficult for people to have the conversations they need to have with their doctors about their wishes at end of life. For more on my thoughts about that, here’s my TED Talk. No, really. That’s not my real objection, though. DO NOT SAY someone “went to a better place” when they die. Just don’t. If you believe that and it brings you comfort, that’s lovely. I’m glad. Not everyone sees it that way and it can come across as dismissive of the grieving person’s pain. It hurts to lose a loved one. You can’t make that better. You can be present for their distress, but you can’t fix it.

What I didn’t know before I did this puzzle: see above re: Strickland Gillilan’s poem. I also had not heard of VEDIC as an early form of Sanskrit. 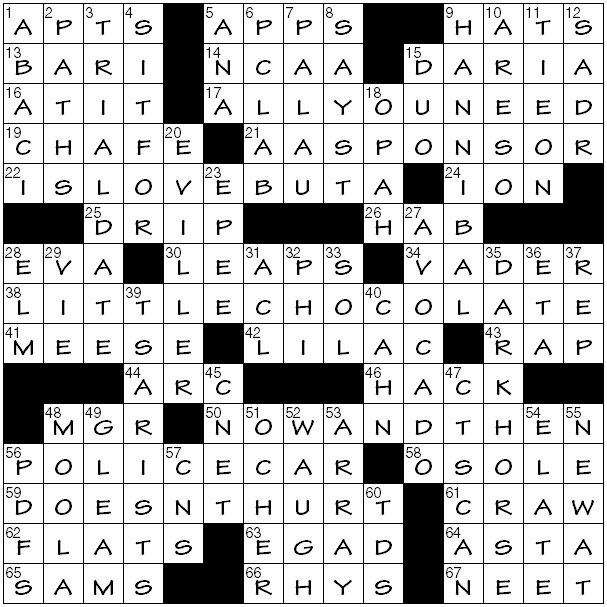 Just under the wire (before dinner, that is). It’s a quote puzzle for Valentine’s Day. I’m not a big fan of quote puzzles. This one doesn’t change my opinion.

The quote, attributed to Charles M. Schulz, spread over five entries: ALL YOU NEED IS LOVE, BUT A LITTLE CHOCOLATE NOW AND THEN DOESN’T HURT. Can’t argue with that. Well, people who are allergic to or don’t like chocolate might argue with it.

I’m tempted to make a quote out of the long downs. Something about a TRIAL DATE for HANNIBAL, who might be the DARK HORSE for those who would otherwise be TSARISTS. Or maybe not.

I’m not all that fond of NEW AT  or SIT FOR, either. Maybe I’m just cranky because it’s cold out and I’m on call, or maybe this is a pretty “meh” puzzle.