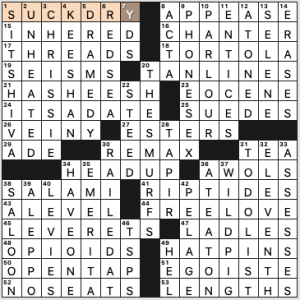 This 62-worder has four spacious quadrants connected by THE SMURFS. Now, I don’t tend to love low-word-count puzzles because the rigors the constructor goes through in making the puzzle don’t often translate into a fun solving experience. Now, “IT’S A DATE” is nice (thought not new), as are RIP TIDES and FREE LOVE, CHRISSIE Hynde (there’s a Pretenders video below), DRAMEDY, and PHONE SEX (plus THE SMURFS). SIT SHIVA is a gorgeous (though sad) entry.

On the other hand we have fill like INHERED, roll-your-own CHANTER, variant spelling HASHEESH, ESTERS, OPEN TAP, weird NO SEATS, ACTA, “HAVE ONE,” rather obscure PELAGE (at least one solver on Twitter was stymied by the PELA*E/E*OISTE crossing), ATE A TON, and the “let’s hold things together with ERASES ASSESSES on the right edge.” 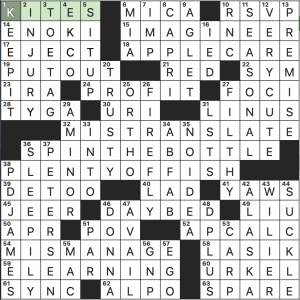 I am getting slower, and the ACPT is coming up! This one I found slightly difficult, especially in the upper left corner. Some of you may think that an 8 minute solve is still fast, but I am still trying to reach my goal of a top 50 finish in Stamford, and this is too slow! Again, I hope that doesn’t sound to self-righteous, but as I get older my window may be closing! I enjoy Julian’s puzzles, though, and this one is no exception. A solid 4.5 stars for this challenging grid.

Gotta go! I am off to the Chicago Auto Show today for the first time in around 30 years! 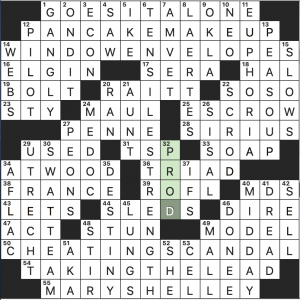 What a lovely wide-open grid! I had some large swaths of white squares for a few minutes, but after getting a couple of these longer entries in the top and bottom stackes, the puzzle then fell fairly quickly. Maybe I am getting used to Brad’s Stumpers after several years! I will describe this puzzle as a FUN Stumper, and I normally don’t have that feeling after a Stumper. It is normally a feeling of mental exhaustion! 4.3 stars for an enjoyable Stumper, and yes, next week might be a doozy!

Some fun stuff from this week’s Stumper:

Anyone ever see this name in a byline as of late? New to me. (yes… I’m being sarcastic!)

THEME: Athletes (for the most part) cross an apt part of another two word phrase.

I like this conceptually. It’s hard not to view ARROW as a total outlier, however, since 1) it’s not an athlete as are the others and 2) an ARROW does not cross a target at all… it pierces it. Who has ever said “Wow, Archie! Your ARROW really crossed that bullseye!”? Unless, of course, we’re talking about crossing in the context of the crossword, but the others don’t seem to follow that same idea. Also that wouldn’t make sense because the clue says [Sharp projectile that aptly crosses the last 6 letters of 16-Across]. In the context of the grid, it only crosses 1 letter.

Much longer than usual for me since I entered SEEDED (?) instead of STEWED at 29A [Like some prunes] and refused to think 41D [Average name?] would be anything other than JOE. But I do enjoy a good snag in a Universal.

BUTTER UP, OVERRULE, and KIT KAT were all fun to uncover.

Thanks as usual, Paul. I enjoyed it. Cross my heart. 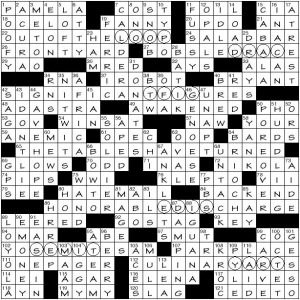 Another one of those “this has to have been done before” themes, though I can’t recall it.

So, uh, your turn. What did YOU think of this crossword?