SHH! is the revealer at 68a, clued [Silent segment of five of this puzzle’s Down answers]. Each of the theme answers has that letter string spanning two words in well-known phrases. I’m not so sure about that clue though; SHH is never silent—not in the theme answers and not in real life. 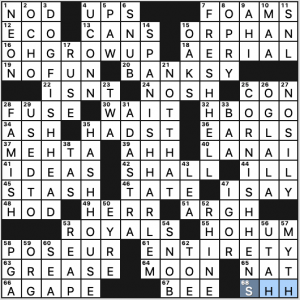 So I’m not going to overthink this. The title is “Quiet Down!” and we have a “phrase” (SHH) that one uses to attain quiet embedded in answers in the Down direction. It doesn’t work exactly, but for puzzle purposes, it’s fine. Perhaps if it was punctuated differently like “‘Quiet!’ Down”. But there I go overthinking it.

Nice fill today. I especially loved the conversational touches like “OH GROW UP!” and “NOT THAT!”. Other goodies include BANKSY, HO-HUM, POSEUR, and GREASE. I didn’t know of the Pitt film AD ASTRA, but of course I’ve heard the phrase, so while it was a challenge to parse at first, educated guesses helped me finish it off. OGLALA [Crazy Horse’s people] was also unexpected. I would have guessed he was from one of the more prominently known tribes. Ah, I see the OGLALA are a subtribe of the Lakota. 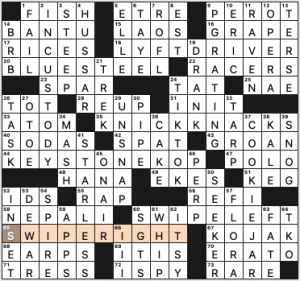 Okay, I’m gonna call the theme a failure because too many people just could not see what it was. Before I did the puzzle, I got a text message from my old boss: “I don’t understand the Wednesday theme.” So then I did the puzzle and … did not grasp the theme. I went to Wordplay, where Deb Amlen reported having had to ask the editors what the theme was. When three people with years of experience in the crossword biz are all perplexed … I’m not sure we’re the problem.

There are two revealer-type clues: 60a. [Reject romantically … or a hint to the starts of the answers to 18- and 35-Across, phonetically], SWIPE LEFT, and 65a. [Show interest romantically … or a hint to the ends of the answers to 20- and 44-Across, phonetically], SWIPE RIGHT. 18a and 35a are LYFT DRIVER and KNICK-KNACKS, while 20a and 44a are BLUE STEEL (lacking a Zoolander clue!) and KEYSTONE KOP. The explanation is that LYFT, KNICK, STEEL, and KOP sound like synonyms of “swipe”: lift, nick, steal, cop. So that’s fine, but it’s unsatisfying for someone who can figure out 99.5% of themes without having to ask anyone to get stumped by a mid-week NYT puzzle. Maybe the revealer clues needed to say “homophones” instead of “phonetically” as a cue?

What else is there? A few things:

Not sure what sort of rating to assign a puzzle whose theme was so elusive. Somewhere in the range of 3-4 stars?

THEME: Double letters are added to doubled words to make up the theme answers 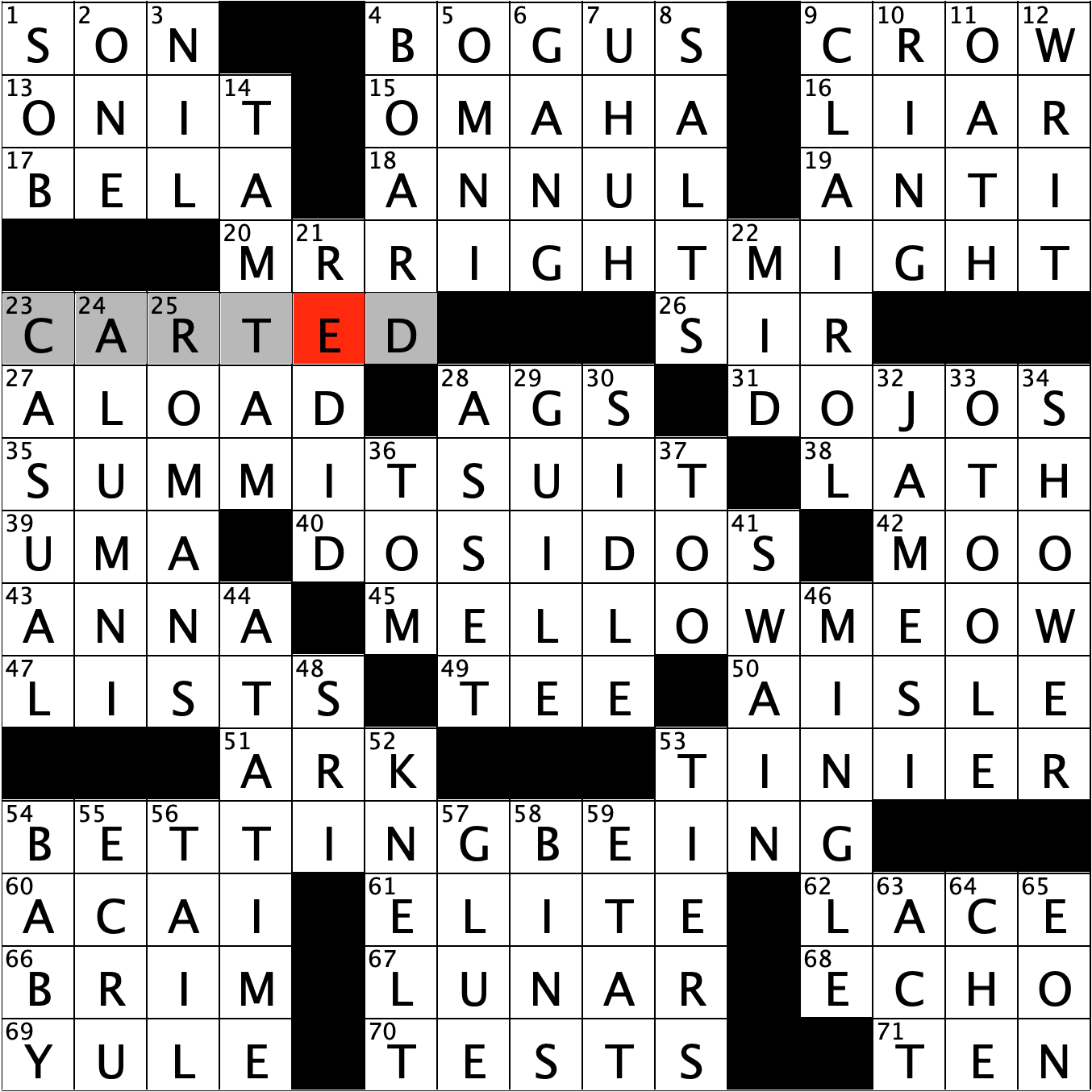 I struggled a lot with this puzzle – and didn’t get quite enough enjoyment from the theme to overcome the problem areas I came across. The theme feels very random here. We have double letters added to doubled words in to make an odd selection of theme answers here that are neither real nor very entertaining. I didn’t see a reason for the letters that were added here beyond just being able to be added and still have words that sort of make sense? And then we have MR RIGHT MIGHT which does not fit with the other the themers which are all just two words with the first word having the extras. If there is something extra going on here that I simply missed I’d love to know what is.

The fill of the puzzle isn’t bad, it just was not on my wavelength at all as far as the cluing, so it took a while for me to get through. I don’t think there was a single area of the puzzle where I didn’t feel like I got stuck. Looking at the grid after solving, other than being a little choppy, nothing sticks out as egregiously bad or difficult, so I think some alternate clues would’ve made it more enjoyable for me, but if I wasn’t reviewing this I doubt I would’ve completed it. 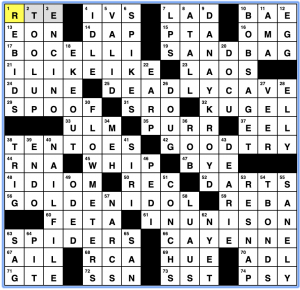 Today’s AVCX is a Francis Heaney grid.  No meta this time!  This week’s 3.5/5 puzzle, “Roll Film!”, is a nice little tribute to an iconic film scene:

It’s opening scene of Raiders of the Lost Ark!  The diagonal spelling ROCK in the upper left corner following a path of black squares diagonally to INDY in the lower right is a lovely touch. There’s even a few clues that aren’t as cross-referenced but still tie in with the movie as a whole: 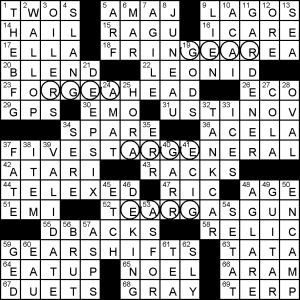 Today features another “scrambled letters found inside longer phrases” theme. Initially, this seemed pretty basic with GEARSHIFTS (the clue for which needs an “in the US” qualifier) indicated that GEAR is scrambled and found in the long answers. One element is quite pleasing, the letters in GEAR shift one at a time from top to bottom. I’m not sure why FRINGEAREA lacked circles, so I added them. Apart from FIVESTARGENERAL, the theme answers are pretty functional, a victim perhaps of the more precise theme requirements.

Better answers today include THEBFG, JUNEAU (whether it’s worth AMAJ is debatable) and DEEPSIX.