No Fireball puzzle this week.

I definitely needed the revealer to get the gimmick here, but once I got there, I found a pretty nifty theme.

Each starred theme answer is a common word or phrase that can be re-parsed into a type of bug and another common word or phrase. It’s this latter part that takes the clue whereas the bug has to be mentally removed. This is made clear with the revealer BUGS OUT (39a, [Leaves in a hurry, or a hint to the cluing of the starred answers]). 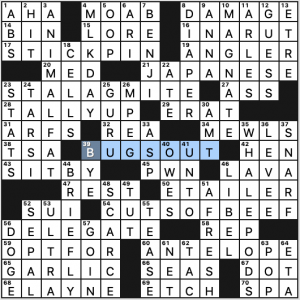 Clever, cute, and crunchy, providing just enough resistance for a late-in-the-week puzzle. Everything was pretty smooth once I grokked the theme except that SE corner. CUTS OF BEEF was hard to parse; I knew I wanted “cuts off” but couldn’t see how to get there. And that clue for ELOPE…well, let’s just say I’m not fully convinced. [Bail and bond] I’d be okay with, but the clue as is feels like a bit of a stretch.

But overall a fun theme to suss out.

Highlights in the fill include JAPANESE, DELEGATE, WHALE PODS, and ANIMAL FAT (or maybe that’s a lowlight). I also liked MLK DAY, TALLY UP, BENJI, DIAPER, and ELAYNE Boosler, who is a crossworder, I believe. 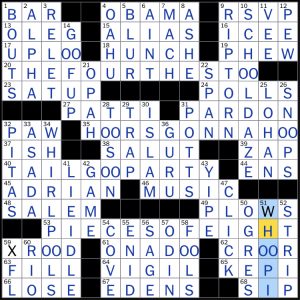 I used rebus squares since I started with the down clues while solving, but you could also put an 8 in the eight special squares of this grid and interpret those PIECES OF EIGHT as the double-Os in SCH(OO)L DAZE, G(OO)F UP, SN(OO)PS, T(OO) S(OO)N, WHIRLP(OO)LS, WH(OO)PI, and F(OO)LS. 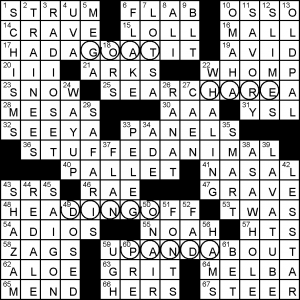 STUFFEDANIMAL makes for a great thematic centrepiece. Here, it’s a hint that four answers have hidden Eutherian mammals, which is but one infraclass of one class of one phylum out of around 35 that make up Animalia. 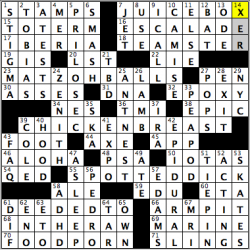 Whoa! A BEQ Thursday review! It’s about time, I know! Thank you for your patience while I tried my best to be available for more Thursday reviews on Fiend, and I hope you’ll forgive me for the lack of commentary in this space for a good while.

Today’s puzzle definitely is one that probably would not have passed the breakfast test — unless the idea of “breakfast” included having breakfast in bed while being sexually aroused by your partner in the process of chowing down! (Hey, sorry to be so suggestive, but, honestly, have you seen the finished grid/theme?!?!) In the grid, four of the theme entries are multiple-word, food-related answers in which the second word also can be used, normally in slang, to identify sex organs. The reason we have to have such a carnal frame of mind with the grid is because of its reveal, FOOD PORN (70A: [Pictures of tasty things, and the theme of this puzzle]).

Enough BEQ grids do end up mentioning marginal-to-good (but not legendary) sports figures, which can be infuriating to a number of solvers, and examples of those today include PEDRO (56D: [Dodgers reliever Baez]) and TOBIAS, though the latter may very well make an NBA All-Star Game in the next year or so since he is a very talented player on a very talented — though maddeningly inconsistent — team (2D: [76ers forward ___ Harris]). Probably the only entry in which I had a tough time in figuring out was CAMISE (10D: [Loose-fitting tunic]). Can’t say that I’ll make it out to the movie theaters for The Irishman, though the grid helped in filling at least one element of the movie with TEAMSTER (18A: [Extra in “The Irishman”]). I have never needed to receiver an EPIDURAL, but I’ve heard from mothers and/or athletes that it is an absolute bear to go through (42D: [Labor day shot]). Oh, and congratulations to the latest (and probably final) full-time Montreal EXPO to make it in into the Baseball Hall of Fame, Larry Walker, who will be inducted into Cooperstown this summer (41D: [Event when new products are previewed]). Speaking of Hall of Fame baseball players…

“Sports will make you smarter” moment of the day: POPS (27D: [Man of the house]) – Last year marked the 40th anniversary of the Pittsburgh Pirates winning their last World Series title, a run to glory that was led by the man called “Pops,” first baseman Willie Stargell. In that 1979 season, at age 39, Pops smacked 32 home runs and was the emotional leader of the “We Are Family” Pirates — yes, the Sister Sledge song was team’s/city’s anthem, given the majority of the team’s starting lineup was black/Latino — on their way to winning the World Series over the Baltimore Orioles, as Pittsburgh came back from a 3-1 series deficit. Stargell won both the NLCS MVP in the Pirates’ win over the Cincinnati Reds, then won the World Series MVP after batting .400 with three home runs (including the go-ahead two-run HR in the sixth inning of Game 7) in the series against the O’s. Stargell, who finished in the top three of regular season NL MVP voting in 1971 (second), 1972 (third) and 1973 (second), finally won the award in 1979, sharing it with the St. Louis Cardinals’ Keith Hernandez. Stargell became the oldest player in Major League history to win an MVP, and held that mark until 40-year-old Barry Bonds won the award in 2004.

Thank you so much for your time, friends! Have a great rest of your Thursday, and hope you have a good weekend coming up!