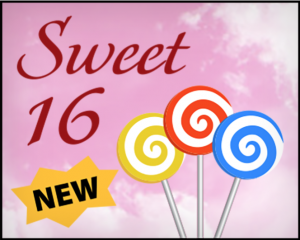 Patrick Berry has a new mini-puzzle extravaganza! For $10, you’ll get the “Sweet 16” PDF with 16 half-page variety puzzles (about the difficulty level of the variety puzzles in the Sunday NYT magazine) plus a meta-puzzle to tie everything together. Several of the puzzle forms were newly created for this set, because that’s just how the inventive Berry rolls. Click here to order “Sweet 16.” 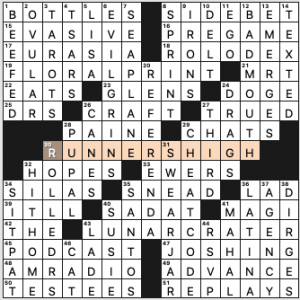 Aww, too bad this wasn’t clued a bit harder and scheduled for Saturday. Doesn’t the diagram look sort of like a big “22” pasted together by REFERENDA? And here it is, clued to Friday the 21st.

Lots of good stuff in this 66-worder, what with all the 6- to 11-letter entries that far outnumber the 3s, 4s, and 5s. The whole enterprise feels fresh and contemporary, with plenty of zippy clues.

As happens pretty much every time I solve an Agard puzzle in the New Yorker, I ended up down a wikipedia rabbit hole reading about another incredible woman I had never heard of. This week, it’s SURYA BONALY, the central entry in today’s grid. The “memorable moment” referenced in the puzzle was her performance of a backflip in competition, an illegal move that is so challenging (and dangerous!) that she is the only skater in history to perform it in competition. 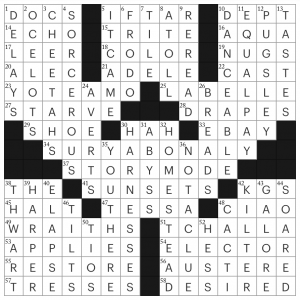 The rest of the puzzle also shines with interesting entries and new takes on standard entries. Some highlights:

A few other observations:

All the stars from me. Here’s a video about that backflip by SURYA BONALY:

This was fun! I love pun themes. I don’t remember seeing a version of this one, but then I have a terrible memory for themes, so who knows? I enjoyed it.

Each theme answer is a pun that features seafood. 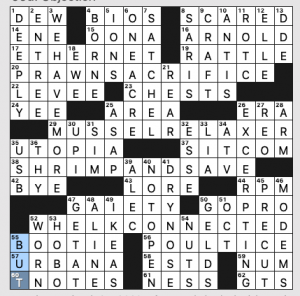 All the base phrases are solidly in the language, all the puns are amusing, and it was a nice start to a Friday morning.

What I didn’t know before I did this puzzle: that UPI was created in 1958 and that Brigitte Bardot was on the cover of ELLE at age 14. That was in 1950, and Wikipedia says she was 15. She was born in 1934, so someone’s got something wrong. Here’s the cover: 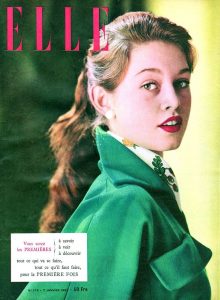 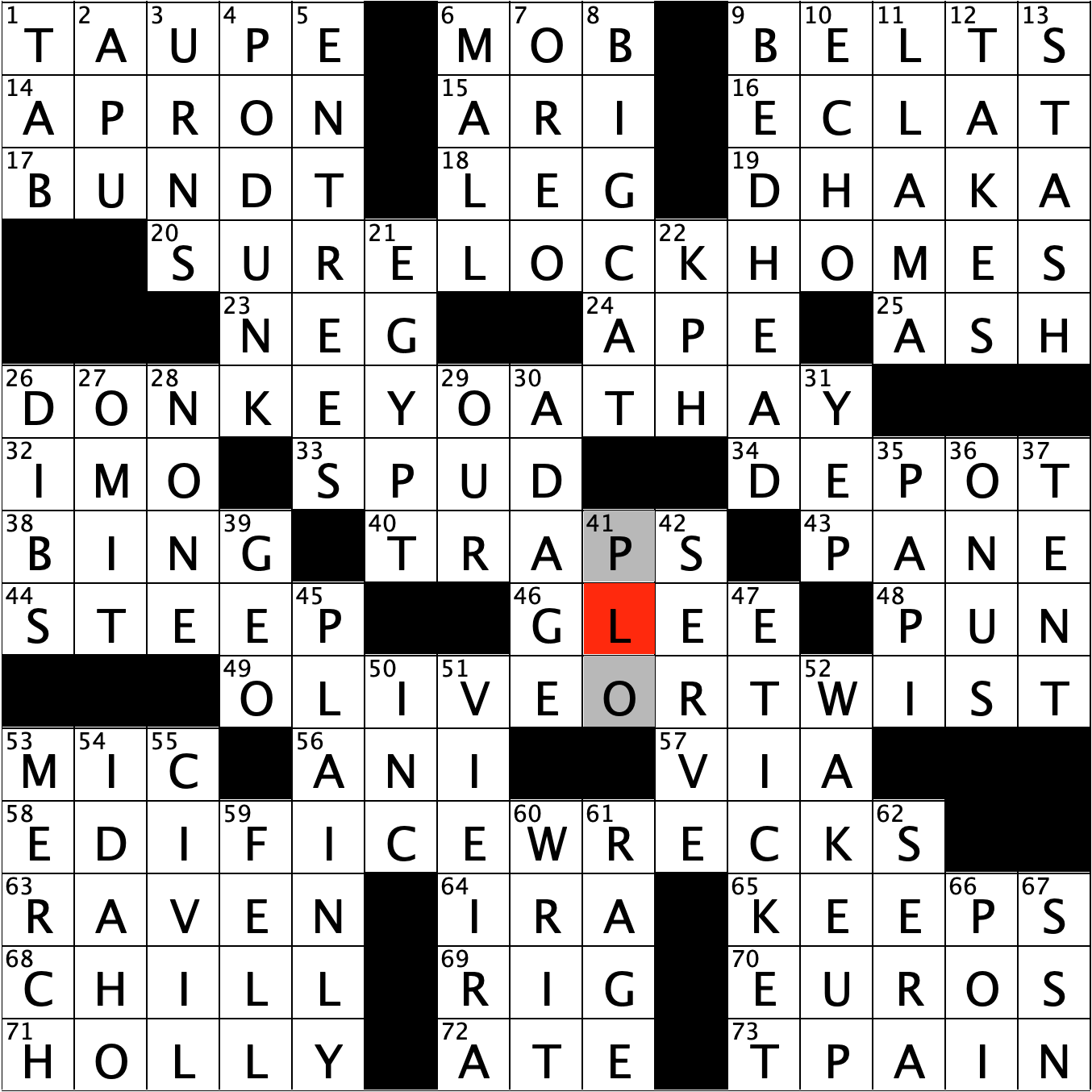 I had a lot of fun with this one. The PUNs were all very entertaining and kept me smiling throughout. As soon as I hit SURE LOCK HOMES I knew this would be entertaining, and the whole puzzle did not disappoint. I’m trying to pick a favorite theme answer, but really they are all so so good. I think DONKEY OAT HAY made me laugh the most, but I would definitely go to a bar called OLIVE OR TWIST.

Fill was interesting and kept the puzzle moving. I have come to the conclusion that I will never remember how to spell VIEIRA [TV personality Meredith], no matter how many times that useful IEI shows up in a puzzle. I also enjoyed the inclusion of both WAKE UP [Early kind of call] and BED HEAD [Tousled hair condition]. 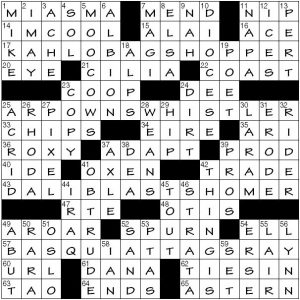 Okay, right of the bat I’ve got to say this one didn’t quite work for me. It’s an attempt to bring together painting and baseball, presumably because of a few (but not enough, as we’ll see) fortuitous names.

You see the inconsistency, yes? The object in each of these phrases is the key baseball part. Hopper, Whistler, and Homer (Edward, James McNeill, Winslow) are all famous painter’s surnames but also baseball terms—specifically, types of hits. But (Man) Ray is the name for someone on the Tampa Bay team.

The verbs in each phrase do double duty as well, straddling the baseball and art spheres of the theme, but in truth they’re malleable, all-purpose sorts of verbs. Nothing special there.

And then, the lead-off subjects. Also painters (Frida Kahlo, Jean (or Hans) Arp, Salvador Dalí, Jean Michel Baasquiat), but as far as I can tell they’re just there for the letter lengths and to slightly pad the gender and racial diversity stats.

If the puzzle had dropped that fourth themer and kept only the three ‘strikes’ it would have been much more robust and satisfying. Perhaps augmented with some theme-adjacent stuff in the regular fill. Maybe something about POP art? There must be some other opportunities, but I’m not going to spend time thinking about it or researching it.

One interesting thing the crossword highlighted is that surreal has entered the language fully enough to become lowercased, whereas Cubist and Dada have not.

Recap: interesting theme, but it ERODEd (31d) before the final inning.