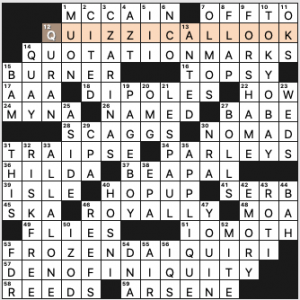 This is sort of a stunt puzzle, in that the constructor seeded the grid with pairs of 13s and 14s that include a Q: a QUIZZICAL LOOK, QUOTATION MARKS, a FROZEN DAIQUIRI, and a DEN OF INIQUITY. Along with those entries are these other bright spots: TRAIPSE, PAGEBOY, LES PAUL, FOR SHAME, APPLIQUE, and TOKYO BAY. On the down side, DIPOLES does nothing for me (your mileage may vary), and neither does MOA, but overall the fill’s quite solid. 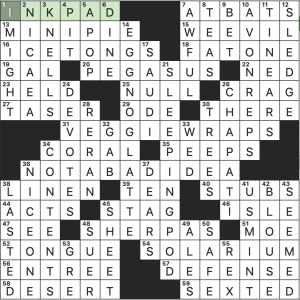 I think I have seen more of C.C.’s puzzles on Saturdays recently instead of Tuesday! This is one of the themeless grids that is slightly easier to fill, but with the removal of a few center blocks, there are some interlocking 11-letter answers in the middle, which is nice. The remaining fill around that is solid, as you would expect from a C.C. Burnikel puzzle. Extremely well done, as always! 4.5 stars.

Some stuff that caught my eye: 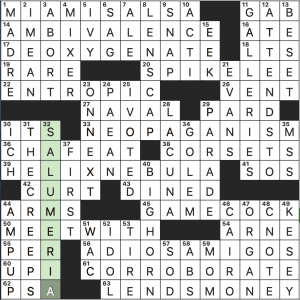 Definitely a Stumper this week. I surely learned a couple of words, which I will try to highlight below. I thought my time would be worse than it was, but after getting a decent toehold in the grid, progress was slightly faster. Matthew Sewell is up there, if not already, in Longo territory. Speaking of Frank: haven’t seen one of his in a while! We will keep our eyes posted. In the meantime, 4.6 stars for this themeless gem.

Some highlights, including a new word or two for you! 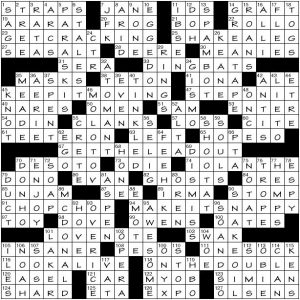 These are on the whole quite good, with only a couple seeming overly contrived. And one of those is the central crossword one, which is readily forgiven.

I feel like there was a missed opportunity for Sam to drop his own name from the puzzle! Something like, say, [Result of quality trip to the beach for NPR host Shapiro] = GOOD ARI TAN. Heck, if you pluralize it you can even fit it symmetrically into the grid!

THEME: Common names are dropped from common phrases, which are then clued wackily. 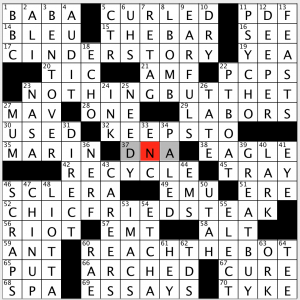 Great idea and perfectly titled. Funny enough, I didn’t notice the extra hint at the end of the clue (the names that are dropped) until post-solve. I don’t think they’re necessary in the clues themselves. It’s more fun to figure out the name that is being dropped on your own imo.

The only themer that didn’t land for me as solidly as the rest was NOTHING BUT THE T. THE T (or any lone letter like that) feels too weak/cheap to be part of a theme answer and it also feels closer to regional knowledge (I only vaguely knew the Boston subway was referred to as THE T).

Smooth grid that seemed slightly tougher than usual. PCPS was the last thing I filled in. I don’t think I’ve ever seen that as a plural!