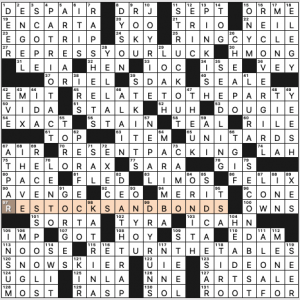 The theme’s a basic “add RE- to the start of a familiar phrase to create a made-up phrase” one:

I enjoyed this puzzle. Each of the theme entries is a two-word name or phrase that contains a collective noun. The fun is in the clues. 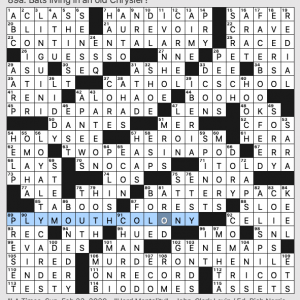 A solid theme and a fun Sunday puzzle.

What I didn’t know before I did this puzzle: that a CHARRO was a Mexican horseman.

I had a hunch from the title that we were gonna be getting some punny song titles today.

THEME: Song titles are manipulated to include automobiles or things having to do with automobiles.

TIRES, MINI, JEEP, (singular) BRAKE, FUEL, HOOD, OIL. This one plays a little loose, combining liquids, car parts, and makes of automobiles in a delightfully eclectic mix of song titles. While I do like the songs, the variety of “things having to do with cars” was a bit much for me. Like his predecessor, Evan does not always follow overly-strict rules when it comes to consistency in theme answers (how can you when you’re making a 21x grid every week?), and I typically appreciate that. But I was thrown after uncovering JEEP THRILLS as my first theme answer followed by ANOTHER BRAKE IN THE WALL. I figured we’d be seeing goofy rhyming with car brands: HELP ME, HONDA! MAMMA KIA! Nope. With this one, I would’ve preferred more consistency. Still, it was fun enough!

Had trouble with a couple names, particularly in the south (looking at you KAWHI!), but nothing that wasn’t fairly crossed.

Okay, that’s all. Enjoy your Sunday!

I always cringe when I open a Universal that I download as an Across Lite version and I see circled letters. It means that there are uncircled letters that should be circled in the print version. In those versions, where novice and casual solvers are more likely to be solving, solvers are asked to count letters. I’ve seen many new solvers try to interpret the clues in which they are asked to count boxes and it turns into frustration and confusion. I get it, and readers of this blog are likely to get it, but I think it’s a rather absurd burden to be putting on a new solver when all you’d have to do is update some software so that circles could be included. And of course, the visual element is lost as well.

I don’t think I’ve ever used the word IDEAL in the same way I’ve used CREDO or TENET, but maybe I’m not clear on its definition in that sense. We do see a lot of these “hidden word” type themes in Universal with a punny revealer, and while this one doesn’t land as solidly as they usually do, it works just fine.

Liked THE HUSTLER and its symmetrical partner CARD SHARKS (although I wasn’t sure if it were SHARKS or SHARPS until I got the cross!). I’ve never had BACON on a doughnut, but I’m sure it’s amazing. EHLE was new to me [Jennifer of “The King’s Speech”]. Looks like she’s been in plenty of crosswords, so I’m not sure how I keep missing her. 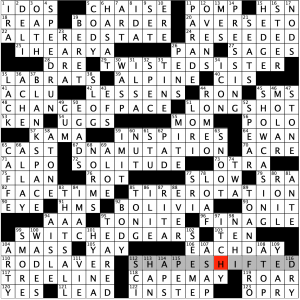 A bit short on time but this was a fun Sunday puzzle – took quite a few downs before I caught onto what was happening, but once I got ALTERED STATES the rest was smooth sailing. The theme answers were great and worked on every level – they’re all real phrases and all describe a change in the anagrammed word.

Some fun clues throughout the puzzle as well with CAST [Play group?] and PENS [Low-tech clickers?] my favorites today.