It seems like we’ve had a few harder-than-usual Mondays lately. This one felt a bit harder when I was solving it, and then I looked at my time and thought maybe it wasn’t. When I can’t fill in 1a, I always feel like a crossword is harder.

The theme is in the long Downs, and the revealer tells us what to look for. 15d is [Activity depicted in a famous 2/23/1945 photograph … and in three of this puzzle’s answers]: RAISING THE FLAG. FLAG goes up in each answer. 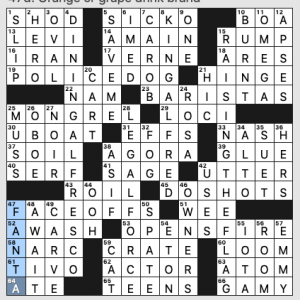 Aside from that small quibble with 28d, it’s a solid theme which of course refers to the iconic photo of the American flag being raised on Mt. Suribachi after the Battle of Iwo Jima. 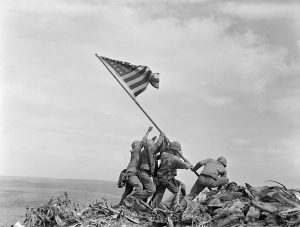 I’ve read that this photo was staged. Wikipedia has a fairly well-referenced entry that says it was not. It was the second flag raised; the first was too small to be seen from very far away and the Secretary of the Navy, James Forrestal, wanted it as a souvenir. Joe Rosenthal shot the photo as the second flag was being raised and then staged a shot of the entire group of Marines. When he was asked if he staged the photo, he thought the question referred to the group shot and said “yes.” He spent the rest of his life trying to convince people that he had not staged the photo of the flag-raising.

What I didn’t know before I did this puzzle: that KING ALFRED was known as “the Great.” 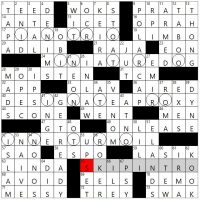 17A: PIANO TRIO [Keyboard chamber work]
24A: MINIATURE DOG [Shih Tzu or Chihuahua]
40A: DESIGNATE A PROXY [Authorize someone to represent you at the shareholder meeting]
52A: INNER TURMOIL [Personal unrest]
65A: SKIP INTRO [Command to bypass a recap of prior episodes … and what the puzzle circles do]

Each of the theme entries has the letters of INTRO circled as a hint to what’s being skipped as you go throughout the theme entry. I liked this as a revealer and only wish that each theme entry had skipped from INTRO letter to non-INTRO letter and back so it was truly skipping (instead of a few spots of bunching). As for the revealer clue, I guess I’d say that the non-circled squares are the ones that technically SKIP INTRO, but it’s a fun revealer all the same. I wonder if the constructor originally wanted DESIGNATED PROXY with a D but it made filling that section of the grid too tough?

Other random thoughts:
– This puzzle’s clue/fill felt very unmodern until the super modern revealer. I wonder if some of the fill was originally clued in a more modern way – maybe 9A was clued in reference to Chris PRATT? Still, there was enough in here that felt like it was out of the 80s to early 2000s, including LASIK, LINDA Rondstadt, SWAK, and “Love Actually”, and “Mystic Pizza”. Is the KEIRA Knightly clue the most modern thing in the puzzle aside from the revealer? Maybe [Hogwarts librarian ___ Pince] IRMA wins for modernity? I’d argue that this puzzle was made in the early 2000s if it weren’t for the revealer – it made for an odd solving experience, but not unenjoyable!
– There were some interesting pluralizations and unpluralizations in this grid including DENIMS, MADS (to refer to multiples of the magazine), and TAPA.
– In the clue for OCR [Text digitization meth.], I didn’t see the period and was briefly scandalized that the LAT was dealing with methamphetamines right there in the puzzle. Time to put on the reading glasses!

Theme: THERE’S / A CATCH (34a, [With 36-Across, “This has strings attached,” and a hint to the ends of the starred answers]). The starred answers end in a word that can also mean a device that’s used to fasten things. 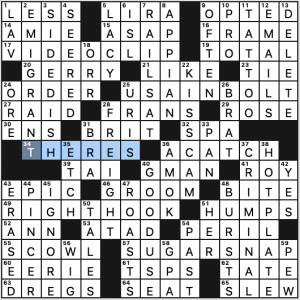 Fairly simple and straightforward, but that’s what we’re after in a Monday—something to ease us into the week. Having to break up the revealer into two pieces is a little unsightly, but having a 12-letter revealer is awkward no matter what you try to do with it. At least this divided up into two equal-length entries that could be used in the center.

I like how the title pulls double duty. “Hold it!” is something you might say when you realize that THERE’S A CATCH, and a catch, or a fastener, holds two things together. Nicely done.

I solved while watching the return of The Walking Dead, so I didn’t time myself nor did I pay too close attention to the fill. I do like KISSCAM, CRIMINAL, HOT PLATE, and SIDE DISH. But I’m not so keen on RAILS AT and ISL. GOOD USE feels like a long partial.

Only one clue of note today: 20a. [1960s English group ___ and the Pacemakers]. GERRY. Who else put JERRY? The only other GERRY I can think of is Sinn Féin’s GERRY Adams. And since Gary is a radio DJ, I can see why he went the musical route.

Straightforward puzzle without any sort of a catch, ironically. 3.5 stars.

In the words of Cardi B, Bad Bunny, and J Balvin, I LIKE It! This puzzle has something for everyone: solid puns, neat corners, new stuff, old stuff, lots of crunchy entries, and some mostly-but-not-all-good fill. 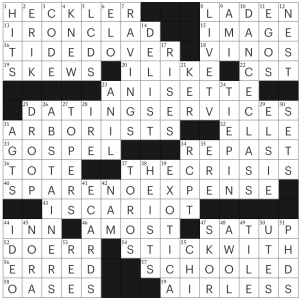 The pun that stumped me until the end (seriously, it was my last entry, at the cross with KER (?!)) was the clue on the marquee entry DATING SERVICES: “Matching outfits?”. This is so clever!! Other punny clues:

this image was literally on my screen during the solve

Overall, plenty of stars from me.

Lots to like in today’s BEQ, even if the idea of a POP–TARTS PRETZEL doesn’t exactly make you salivate ala Pavlov’s Dog. 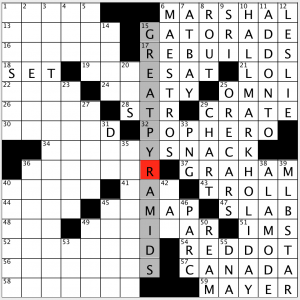 I had a much more difficult time with the entire west side of the puzzle compared with the east. The split is almost comical- I took a screenshot after some moments of head-scratching just to emphasize how exactly half of the grid was harder. I eventually found a foothold and slowly crept my way from the SW to the NW, stumbling only on LEONA/FIRMA (wasn’t sure which vowel to drop in for last letter).