This week, we’re looking for the name of a game. Does it mean anything to you?

There aren’t any stand-out themers, but this clue is suggestive:

And I did notice multiple instances of repeated letters in several entries: 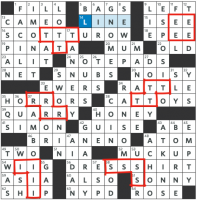 Groups of letters spelling out T-E-T-R-I-S are shaped like the pieces (technically tetrominoes) in Tetris — which is the name of a game, and our answer. The missing shape, the four-block line (which was always very helpful for getting rid of rows if you’d made a big stack of them), is suggested by 14-Across. I feel like I played enough Tetris in the 1990s while procrastinating during grad school (I had some shareware version on a 3.5-inch diskette, that played a vaguely Russian-sounding tune while the shapes fell) that those seven pieces, swirling gently through a rectangular grid, must be permanently etched upon my subconscious. And … apparently this is a known cognitive effect of playing Tetris! Gosh I’d really like to download it on my laptop … right … now, but if I do, I’ll never finish this post. Super fun and easy meta from Mr. Berry this week!

In April 2000, some extremely creative, talented, and awesome students at my alma mater decided that the fourteen-story Sciences Library would make an ideal Tetris grid, and using Linux, a bunch of circuit boards, and thousands of Christmas tree lights, they built an “art installation” that was, at the time, the world’s largest Tetris game, and is still considered the largest work of art ever to appear in Rhode Island: