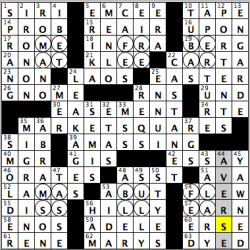 Hello everybody! We are already into the last week of February, which means some of us will be drinking green beers before we know it for St. Patrick’s Day! (I’ve never had a green-hued beer in my life, and I plan on keeping it that way.)

Today’s puzzle included groups of circles that had to be interpreted as squares because the words that were formed in each of the circles ended up fitting in to today’s theme, MARKET SQUARES (35A: [Central open-air commerce areas in towns and cities…and a key to the puzzle theme]).

Seeing the longish entries of EASEMENT (30A: [Right of way, to a property owner]) and AMASSING sandwiching today’s theme was definitely an eye-pleaser (39A: [Gathering]). And those entries were just a few of the seven-letter or longer entries that dotted this grid, with CASTANET forcing my mind to replay the sound that it makes over and over after solving for it (22D: [Clicker in a flamenco dancer’s hand]). Given today’s political climate here in the United States, very timely and apropos to mention Thoreau’s ESSAY in the grid (42A: [“Civil Disobedience,” for one]). Speaking of a nice shout out, there’s one for Chesley Sullenberger with the clue to SULLY, and I can’t believe it’s been over 11 years since that flight because I can remember seeing the news about it like it was yesterday (49D: [Nickname of the “Miracle on the Hudson” pilot]). There are names of two old-time Major League Baseball players, with one being ENOS Slaughter, the man whose “mad dash” allowed him to score the game-winning run of the 1946 World Series (58A: [Slaughter of baseball]). The other person is not known for his baseball skills as much as he is for his espionage during war. Wait, what?

“Sports will make you smarter” moment of the day: BERG (19A: [Icy hazard for ships]) – Princeton and Columbia-educated, as well as fluent in many languages, former Major League catcher Moe Berg ended up spending his immediate post-baseball career as a United States spy. notably being sent by the U.S. government to Italy to interview a number of physicists about Nazi Germany’s nuclear program. During trips to Japan in which he accompanied Major League all stars as they played exhibition games, Berg gathered intelligence for the government, filming the city of Tokyo from rooftops and providing US intelligence rare photos from the city. Though Berg had a 15-year career in the Majors, performed dangerous missions for US intelligence and was renown for his intelligence by appearances on game shows, he was without work for around the last 20 years of his life. He passed away in 1972 due to effects from a fall in his home and, reportedly, his last words was to the nurse who was taking care of him were these: “How did the Mets do today?”

Puzzle’s like today’s WSJ by editor Mike Shenk are why I’m a huge fan of letting puzzles have titles. Look at the great upset critter themers we get in today’s “Animals in Revolt” puzzle without having to sacrifice room in the grid for a revealer: 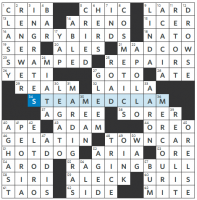 A nice tight theme set! I can’t think of many other common phrases or compound nouns that have this same angry animal setup – comment below if you can.

Other random thoughts:
– I loved seeing the APOLLO Theater get a shout out!
– This fill in the puzzle was largely so smooth but gosh was that MERCOURI / URIS crossing in the SE corner a doozy! I had to run the alphabet at that square until I got it. TRICE was also tough for me, but the crossings there were all super fair.
– For women in the grid, we have LENA Horne, LAILA / ALI, HERS, LINDA Rondstadt, and Melina MERCOURI. So, 4 women plus a pronoun. There are many more men than that in the grid and there are almost as many Hanks (AARON and Williams III) as women. Women vs. Hanks: 4 to 2.
– I liked the mini pig theme, with the “villainous green pigs” in ANGRY BIRDS, [Pig fat] LARD, and [Porcine comment] OINK. Maybe being cast as the villains has made them the angriest animals of all in this puzzle? :) 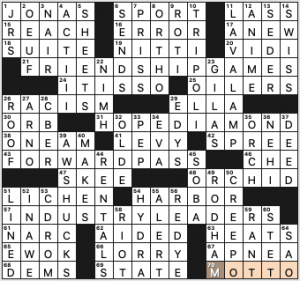 STATE / MOTTOs are the name of the game today: 69a. [With 70-Across, what the first word of each long Across answer is vis-à-vis the bracketed place in its clue]. There are four states with one-word mottos in English, and those words are the first part of these four themers:

I don’t personally find state motto trivia to be of much interest, and the theme entries weren’t particularly lively.

AW SHUCKS and LAVA LAMP are zippy, but there was also fill that felt a bit hard for a Tuesday (NITTI, VIDI, ARNO, stilted IT IS SO) or on the blah side (ORCH, EDYS, STET, REDYE, plural GILAS).

3d. [Brand to use “if you dare wear short shorts”], NAIR. Ah, yes. The single catchiest commercial jingle about pubic hair America has ever had.

Matt Jones’s Jonesin’ Crossword, “Is It of Isn’t It” – Derek’s write-up 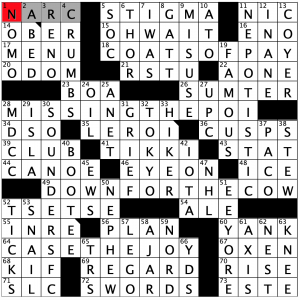 This title is a little tricky, but let me list the theme answers and then we will explain:

So we have several phrases that have the NT sound removed from the end. For example, coats of paint has been shortened to COATS OF PAY. So the title now makes a little more sense hopefully, as the “nt” sound is in one half of the title and not in the other half. Nicely executed, with several hilarious entries and clues. A great example of a Jonesin’ puzzle! 4.6 stars this week. 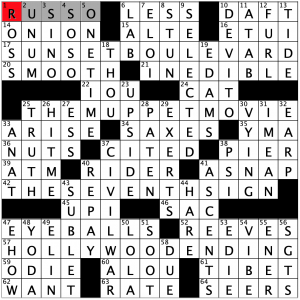 Could this theme be interpreted in two ways? We shall see. Let’s see what the original theme is in the first place and then we will discuss:

So we are familiar with the terms Hollywood Boulevard, Hollywood movie, and Hollywood sign. But is it a double theme in that each of these movies has, shall we say, a Hollywood ending? That is an actual open-ended question, since the only movie of these three I have seen is The Muppet Movie! In any case, a nice theme that at the very least makes you think a bit! A solid 4.5 stars for this one.

Everyone have a fantastic week!

This one is bound to have you OOHing and AAHing!

Cute! Most of these felt solidly in-language and I like that OOH bridges the separate parts of the answer. IT’S TOO HOT is the one that I can’t be positive is an in-language phrase, and I like the other ones better because OOH is included in all of each entry’s words.

Great clue for 29D [Charger that won’t fit in your luggage?] RHINOCEROS! Also, it’s butted up against another solid, long down answer (DELAWARE). The symmetrical pair is equally nice (SNAKE OIL/POWERHOUSE).